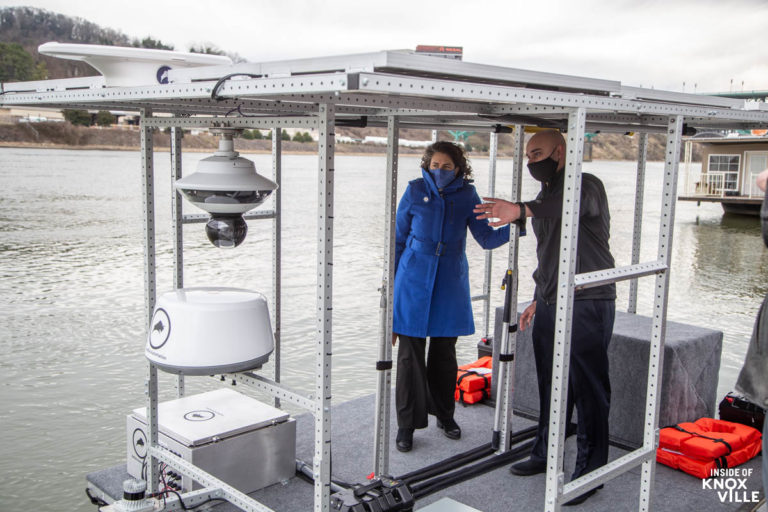 Buffalo Automation, a company founded in 2015 in Buffalo, New York, is exploring the opportunity to launch the world’s first automated water taxi — a self driving boat — on the Tennessee River at Volunteer Landing. Approvals are being sought and the Knoxville City Council is likely to take up the topic in February. If approved, it would begin a pilot phase which would include ferrying people between Volunteer Landing and Suttree Landing Park.

C.E.O. and co-founder Thiru Vikram spoke to the press about the concept. Looking less like a boat and more like something built from an erector set or a Leggo collection, the cube-shaped structure is a sophisticated assemblage of technology. The craft is fully electric and solar powered. It makes no noise and features three trolling motors and simple batteries found in a car or boat. 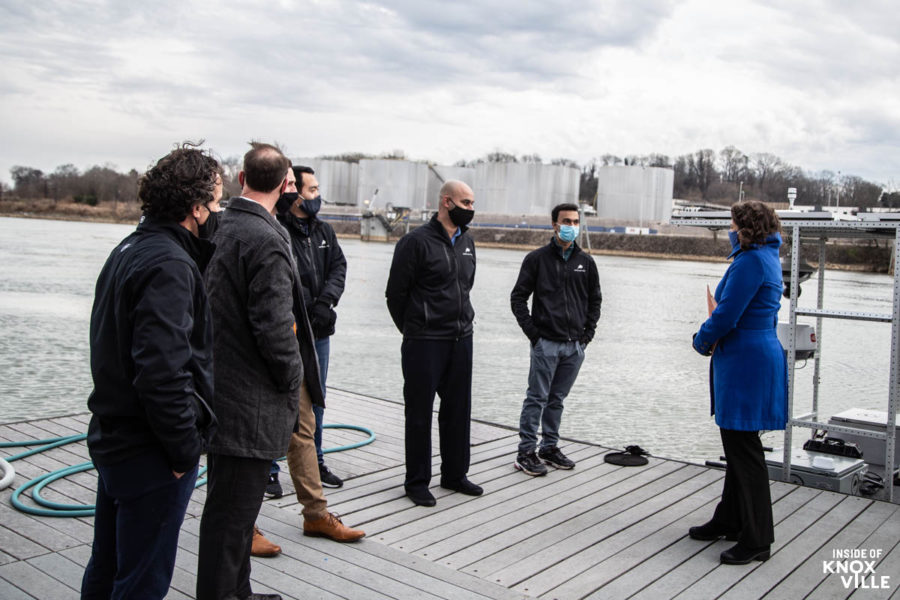 There are two motors on the opposite end from the trolling motors, which allow for side-to-side movement, allowing for smoother docking. It is equipped with multiple cameras, radar, satellite compass, a GPS mounted on the top beside the solar panels, a laser scanner and a wind sensor. It maps and stores its terrain as it moves and automatically moves to avoid any collisions. There is no manual steering mechanism.

This isn’t the company’s first AI venture. They have several products in use in boats and ships in the Great Lakes, all of which incorporate some element of the technology seen on this craft. Their Pegasus system is the heart of the new project and the group sees the self-driving feature as a way to get inexperienced boaters on the water.

Mayor Kincannon expressed excitement at what the non-polluting vehicle meant for sustainability. She said it “amplifies our blueways,” noting that Knoxville is close to the head waters of the Tennessee River. Pointing out that the city has reduced greenhouse emissions by 11% since 2005, she said this kind of technology can help us continue that success and to reach future goals.

The Chamber of Commerce has been in discussions with the group since last August, emphasizing the area’s technology corridor and boating industry. A large percentage of boats used in America are manufactured here and the chamber would like to see this company establish a manufacturing plant in the area. The company is looking to market the boats globally and the small parts involved, make it possible to ship anywhere in the world, unlike a traditional boat, which is much more difficult and expensive to get across an ocean.

If given the green light, the group would like to have the pilot project in place this spring. Fares would be free initially and customers would be able to book the boat on the May Day App. Eventually, the group hopes to have multiple vessels available to go out onto the river un predetermined spots. It would be the world’s first automated water taxi and it would launch here.