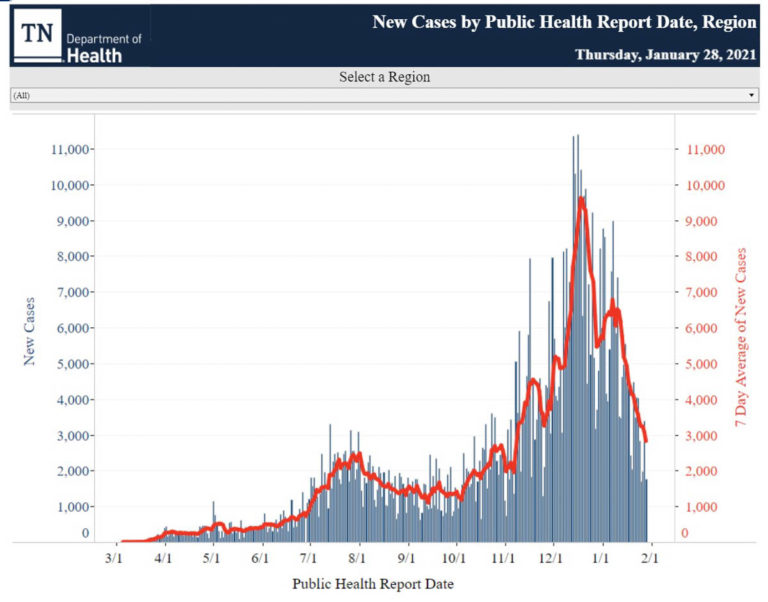 Welcome to a beautiful Friday in the city! I had one long, brisk walk this morning and I hope to get out and take more. There will be Potter and “Once Upon a Time,” I am sure. Mostly, there will be cuddles, hugs, and laughs. We all need as much of that as we can get. Here’s hoping we all get more of that in the coming months.

Tennessee reported 1,777 new cases of COVID-19 yesterday, the second lowest daily total in the last two months. It brings the number of confirmed cases to 610,541 and the number of probable cases to 107,042. 672,110 are considered inactive, while 36,056 Tennesseans have an active case of the virus. The number of active cases has plummeted as fewer cases are confirmed each day.

115 additional state residents were hospitalized with the virus yesterday, bringing the total to 16,938 since the beginning of the pandemic. It is worth noting that hospital entries have been high recently, even as the hospital census has been dropping. The current hospital census has reached 1,886 COVID-positive Tennesseans, the lowest the number has been since November 15. 522 are in ICUs and 311 are on ventilators. Each of these numbers have also fallen steadily since early this month.

One contributor to the drop in hospitalizations continues to be a high rate of deaths. The state reported 101 deaths yesterday, marking the first time the state has reported over 100 deaths for four consecutive days. Only sixteen days since the beginning of the pandemic have seen over 100 deaths recorded in the state. Five of those days came in December and eleven were reported in January. Over the last seven days, the state has averaged 107 deaths per day.

As you might guess from the low daily case report, testing plummeted once more yesterday. Less than 14,000 tests were reported, just a bit more than half the day before. The state reported a slightly higher positive test rate than has been the case recently, at 12.81%. Johns Hopkins University reports a 13.1% average over the last seven days.

Updated state numbers on vaccinations shows a drop in pace from that reported yesterday. 578,954 vaccinations have been given (first and second totaled together), including 9,008 the day before the report and 134,890 for the seven-day period. This drops the projected 100% vaccination point to 679 days, or December 8, 2022.

The Knox County Health Department reported 127 new cases today, bringing Knox County totals to 36,913 confirmed cases and 5,557 probable cases. Of these, 39,313 are considered inactive, while 2,687 Knox County residents have an active case of the virus. The number of active cases is the lowest it has been since December 7.

Four additional deaths were reported for the county, bringing the pandemic total to 470. Of the four deaths reported today, two were between the ages of 65 and 74 and two were people 75 years of age or older.

The demographic data provided includes a couple of things that jumped out at me: 29% of the vaccines have gone to people 40 and under, presumably medical professionals. Additionally, 64.6% of the vaccines have gone to females, while a majority of deaths are among men (54%). Are they more willing to get the vaccine? Is it because there are more elderly females? More females in the medical profession?

The number of active cases reported by the University of Tennessee has risen to 96, which is the highest the number has been since November 12. The total of recoveries is back up to 2,581 and I, helpfully, heard from Owen Driskill, Assistant Director of News and Information from UT, who pointed out that my guess was correct yesterday that the drop in this number resulted from an adjustment. He also pointed to a line that I missed when I first mentioned the discrepancy: The number of recoveries was corrected on January 28, 2021, to eliminate an inconsistency in reporting cases that originated over winter break.

The University reported 11 new cases yesterday, and 289 are in isolation or quarantine, up two from the previous day. Of these, 143 are non-residential students, 95 are residential students, and 51 are staff members. An additional, off campus cluster was identified, bringing total clusters since students returned to two.

In the Friday briefing, Dr. Plowman emphasized mask wearing and noted that there have been reports of non-compliance with the on-campus mask mandate. Dr. Zomchick said that group gatherings without masks are being reported in the library and students are refusing to mask-up when asked. He said the staff there has been authorized to ask those students to leave the library. Dr. Plowman made the point that continuing in-person instruction is contingent on following the requirements, including wearing masks.

Of the recent clusters, Dr. Plowman said the on-campus cluster at a sorority house, was not the result of misbehavior, but simply because one person was positive, and the nature of the living space required all to quarantine. She said she had gotten good cooperation from students connected with the off-campus cluster. Dr. Gregg said the compliance rate with group/saliva testing is below 70%.