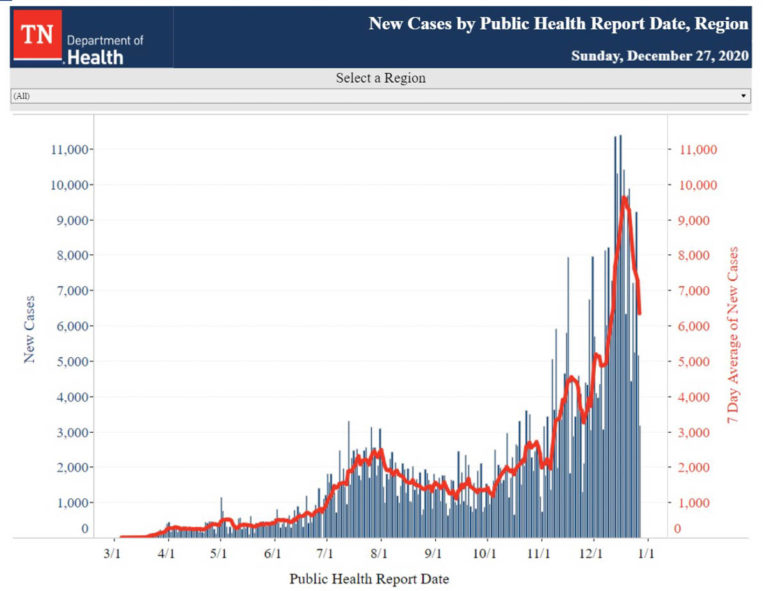 I hope you had a wonderful few days of quiet and peaceful reflection. This must be the strangest Christmas we’ve collectively ever had, and New Year’s will be no different. We are entering a new era of hope. Please take care until you get that vaccine. It is going to be a while and we need to be patient. I just had another good friend get out of the hospital and he had a very rough go of it.

I’m going to run through my usual set of numbers, but a disclaimer has to be placed on the front end: These numbers do not reflect the current level of disease burden. You can see it in the unnatural sharp curve downward on the charts for cases and deaths. The explanation, of course, is that those who run the tests, report the tests at every level, those who report hospitalizations and those who certify, record and report deaths, all need time off, too.

It has been a grueling nine months for many of these people. They need time with their families and time to recover from the grim work they have done every day for most of a year. Many states did not report over the last several days, some countries around the world did the same. The numbers may be altered retroactively, or they may be reported as a group over the next few days.

We will not likely have our normal information flow until the second week of the new year. You can see a smaller, but similar drop on each graph if you look back to Thanksgiving, though that holiday doesn’t have the global impact of Christmas or New Year.

The high daily total for the week was 689,076, the ninth highest daily total of the pandemic. This comes after six of the previous seven weeks had set new records. The seven-day average for daily cases dropped this week to 559,988, from just over 639,000 a week earlier.

Reported deaths dropped to a seven-day average of 10,314 per day. The 13,484 reported two days before Christmas was the second worst day of the pandemic.

Outside the attention given to the new strain of COVID-19 discovered in England, global attention seems to be set on enduring until a vaccine can become widely available. Australia has announced its plans to have 80% of the population vaccinated by October. The U.K. is expected to approve the Oxford-Astrazeneca vaccine today or tomorrow, ramping up the country’s vaccination program. Though perhaps slightly less effective than the other approved vaccines, it is cheaper and does not have to be kept at low temperatures, both particular advantages when considering vaccinating poorer countries. The Noravax vaccine has entered phase three trials. Europe began its rollout of the vaccines yesterday.

About 19.6 million Americans have been diagnosed with COVID-19, an increase of 1.3 million since the same day last week. Roughly 11.5 million are considered recovered, while over 7.7 million cases remain active. There are about 400,000 more active cases than a week earlier. Just over 341,000 Americans have died of the illness, including about 15.7 thousand over the last seven days.

The biggest U.S. COVID-related news over the weekend was that President Trump signed a second relief bill which will, among other things, send $600 checks to most Americans. According to the Department of Health and Human Services, 40% of U.S. ICU patients are COVID-positive and for twenty-six consecutive days more than 100,000 Americans are hospitalized with the illness. The U.S. hit a high this week with 120,000 COVID-positive Americans hospitalized.

The state of Tennessee reported the same sharp dip in cases as was reported across the country over the holiday weekend. The seven-day average for cases dropped from a high of 9,627 per day on December 18, to its current average of 6,342 just ten days later. Yesterday the state reported 3,188 new cases. State totals for cases now include 499,276 confirmed cases and 64,804 probable cases. Of these, 480,227 are considered inactive, while 77,341 remain active.

Only 20 COVID-positive Tennesseans were reported to have been admitted to state hospitals yesterday, bringing the total to 14,091 since the beginning of the pandemic. Numbers reported two days ago (the last day with presumably complete data), indicate 2,853 COVID-positive Tennesseans were hospitalized, about 100 fewer than the high set on December 22.

Of those currently hospitalized, 754 are in ICUs across the state and 439 are on ventilators. The first number is near the record set a few days earlier and the second is a new high. 17% of total hospital beds remain available and 14% of ICU beds are available. Approximately 25% of all hospital patients in Tennessee are COVID-positive, while roughly half those in ICUs are COVID-positive.

Yesterday, the state reported an additional 69 deaths and the average for daily deaths, which peaked at 102 per day on December 23, had fallen to 63.

As of Friday (the last day data is available due to the explosion outside the AT&T Building), the state is reporting a total of 53,258 Tennesseans, including 48,327 in the last week. This translates into about .8% of the state population having gotten their first shot of two.

Since the last report, the Knox County Health Department has reported single-day case increases of 406, 340, 449, 270, and 192 cases. The numbers show the same sharp trajectory downward as shown over the holidays across the state, nation, and world. Confirmed cases for the county have now reached 29,581, with an additional 2,884 probable cases.

Inactive cases have reached 27,121, while 5,038 remain active. A record 5,416 active cases were reported on Christmas eve. As a frame of reference, one month ago today, there were 2,210 active cases in the county. Knowing that a predictable percentage of hospitalizations and deaths follow active cases, January does not appear to be the month in which we’ll turn the tide locally.

Deaths have continued at a high pace for the county. Over the five days since the last report, the county has recorded 9,3,3,6 and 7 deaths each day, for a total of 28 deaths in five days, more than most months of the pandemic. Of these, seven people were between the ages of 45 and 64, eight were between the ages of 65 and 74 and thirteen were 75 years of age or older. It marks a shift from recent numbers that the majority during the period were below 75 years of age.

The state is reporting a 20.3% positive test result rate for Knox County over the last seven days.

In somewhat related news, a fatal shooting was reported at Billiards and Brews at 2:20 am Saturday morning, just off Kingston Pike in west Knoxville. The victim was found in the parking lot. The bar was open over four hours past curfew and was cited for the tenth time for violating the closure mandate. They, along with Paul’s Oasis are scheduled to come before the Beer Board on January 11 where they could face loss of beer permit and $3,000 fine for each violation of the curfew.