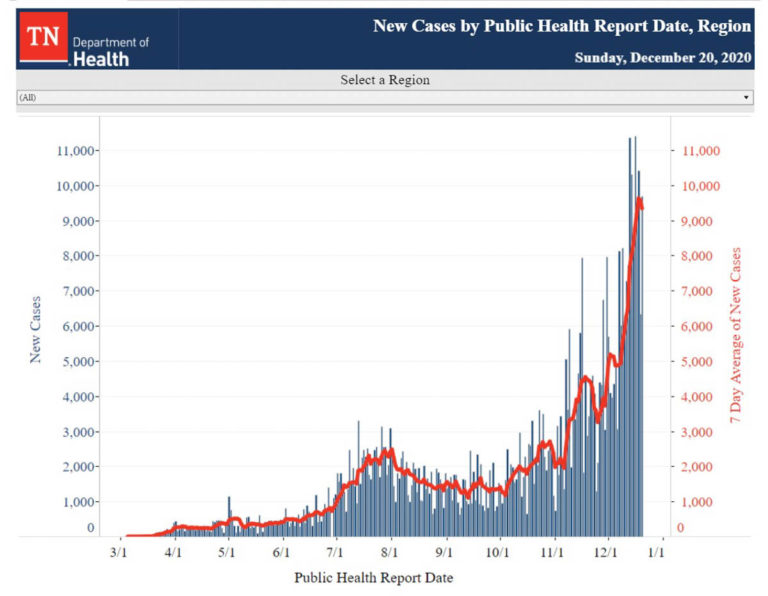 As is the case with increasing numbers of us, I have another friend who is in the hospital. I’ll think of him and send healing thoughts as I write these words. Here’s hoping all of those who are ill return to us, soon.

It’s hard for me to believe it’s Christmas week. Today is the shortest day of the year, which marks a metaphorical low point in the calendar, so maybe we will start getting some better news as the days stretch out. The daylight and the improvement will be incremental, at best, so hand in there. Please continue to reach out to those who are isolated. Remember the 325,000 American families who will be spending this Christmas missing a family member due to COVID-19. Focus on those close to you and we’ll soon be looking at the worst of it in the rearview.

About 77.3 million people across the world have been diagnosed with COVID-19 in the last ten months, with about 4.3 million of those coming in the last week. The increase is slightly slower than each of the last two weeks. About 54.2 million people have recovered, while about 21.4 million have an active case of the illness, about 1.2 million more than the same day a week ago. Just over 1.7 million people have died from the illness across the world, including about 79.5 thousand this last week, up from about 76 thousand each of the last two weeks.

As with recent weeks, a new single-day record for COVID-19 diagnoses was set once more this week. Recent records set each of the last three weeks include 694,845 on December 4, 704,572 set on December 11, and then this past week, 738,913 set on December 17. The seven-day average for cases is now 639,435 per day, up from 631,341 a week ago. Each week this number is later revised upward when countries such as Spain, which do not report on the weekends, send in their numbers.

Deaths are rising slowly. After reporting a relative plateau last week, with a seven-day average of 10,904 deaths per day, nearly identical to the week before, the new average is 11,360 people dying each day from COVID-19. The previous single-day record of 12,966, set December 10, was broken in the last week, when 13,696 people died of the illness on December 16.

Looking at yesterday for a single-day snapshot, there were 547,338 new cases reported, up about 7,800 from the same day a week earlier. 7,986 deaths were reported for the day, up just over 300 from the same day the previous week. For the day, India dropped out of the previous top five countries for daily deaths and Brazil re-entered the top five. Each of the countries reported a decrease in deaths in same-day comparisons, except for the U.S. The top five for the day: the U.S. (1,414), Mexico (627), Russia (511), Brazil (417) and Italy (352).

A lot of global attention is being directed toward England, where a new strain of the virus has been identified and severe new restrictions have been put in place around London. It is said to be up to 70% more transmissible, which is alarming, but is also not certain. The good news is that the strain does not, so far, appear to be more deadly and, science fiction movies aside, most viruses become less deadly as they mutate. The better news is that it appears likely the vaccines will work on the mutations (there are a number of them). The new outbreak is causing many countries to cut travel with England.

The Pfizer vaccine has been given the green light in Europe. China has set a goal of vaccinating 50 million people by sometime in February, with Chinese developed vaccines which are nearing approval. The number would cover about 3.6% of the population of the country. Australia, as other countries is struggling to deal with the reality that a Christmas/New Years surge on top of already high numbers could be devastating to hospitals. Sydney is considering a brief lockdown to avoid the issue.

About 18.3 million Americans have been diagnosed with COVID-19, up about 1.6 million from the same point last week and continuing the increase in pace over previous weeks. Just over 10.6 million people have recovered from the illness and just over 7.3 million have active cases. Active cases number about 600,000 more than the same point a week earlier. About 325,000 Americans have died of the illness, including about 18,400 over the last week.

The U.S. continues to lead the world in total cases (18.3 million to India’s 10.1 million) and deaths (325,000 to Brazil’s 187,000) and to expand the lead each week. The seven-day average for daily cases is 217,630, up from the 216,700 reported last week (which has since been revised upward), though that will be revised upward as the several states not reporting on Sunday add their numbers retroactively. Average daily deaths are 2,628, up from 2,519 reported a week earlier.

Deaths continue to increase in the U.S., as noted above. The current daily average for deaths is now about 20% higher than the worst point last spring. December 16 is now the worst single day for deaths in the country, with 3,561 reported that day, breaking the previous record of 3,263 set seven days earlier.

Looking at yesterday as a snapshot, the states reporting the most deaths continues to shuffle, although three of them repeat from last week’s list. The top five death totals reported yesterday include Texas (109), New York (95), Pennsylvania (92), Florida (90) and California (84). Last week, three states were over 100 deaths for the day, which may offer some hope, or may simply be a one-off quirk of the data.

U.S. news continues to pop. A stimulus bill was just agreed upon is expect to pass right away and, among other things, should provide $600 to each American, halving the first payment. The FDA approved the Moderna vaccine and it is being distributed starting today. Vice-President Pence received his vaccine publicly on Friday and President-elect Joe Biden is doing the same today. Polls increasingly indicate Americans are willing to take the vaccine, with over 80% indicating they will take it in the latest ABC News poll. With over 40 countries restricting travel from the UK due to the new mutation of the virus, the U.S. has no plans to do so according to U.S. Health and Human Services Assistant Secretary Adm. Brett Giroir.

For the second consecutive weekend, the state of Tennessee has struggled to report testing numbers, this time issuing no report on Saturday until a day later due to, “”the volume of tests being processed.” It released numbers for both days on Sunday.

Over the same three days, the state reported 115 deaths on Friday, 57 on Saturday and 54 on Sunday, up a bit from last weekend. The state is averaging 87 deaths per day, up from 74 a week ago.

Only 27 new hospitalizations of COVID-positive Tennesseans were reported yesterday, far off the numbers seen over the last week. 13,745 COVID-positive Tennesseans have been hospitalized over the last nine months. For the first time in over a week, the hospital census for those patients dropped by about 100 to 2,790, with 743 in ICUs and 384 on ventilators. All the numbers are slightly off pandemic highs set in the previous few days. Hospital bed availability is at 16% and ICU availability at 9%.

The state reported about 22,000 tests (retroactively) for Saturday, a significant drop, and about 50,000 for Sunday. For Sunday, the state reported a 17.08% positive test result rate. Johns Hopkins University is reporting a 19.2% average positivity rate for the state over the last week. I mentioned the state was ranked number 1 on the “r” scale, rating the worst spread among the fifty states. The same site now ranks us tenth worst, so that reflects an improvement. Our metric is now 1.07 on the scale.

In other state news, Governor Lee’s wife tested positive for COVID-19. In a briefing on Sunday, TDH Commissioner Dr. Lisa Piercey issued a dire statement about what is coming next for the state, saying of a potential Christmas surge, “It will completely break our hospitals.”

With these items in the news cycle, the governor announced an 8pm special address to the state last night and many anticipated he may shift his opposition to a state-wide mask mandate and join the other 38 states in issuing one. He did not, instead choosing to issue an executive order limiting social gatherings to 10 people and encouraging people to wear masks, as he has done for some months. He expressed support to those counties which have issued mandates.

The executive order includes numerous exceptions, including but not limited to worship services, weddings, funerals and related events and participation in sporting events. He did indicate that limits on attendance at sporting events would be forthcoming. He asked that Tennesseans not gather indoors with anyone outside their households over Christmas.

Mayor Jacobs issued an enthusiastic endorsement of the address saying, “I’m happy and proud Governor Lee is trusting Tennesseans to do the right thing by encouraging good choices instead of mandating them,” while Mayor Kincannon was less enthusiastic on Twitter, noting a Churchill quote used by the governor, “Winston Churchill would have issued a statewide mask mandate. In July. Very disappointed that even with so many Tennesseans *dying*@GovBillLee won’t unite the state to fight this pandemic.”

Since the last update, the Knox County Health Department reported 724 new cases of COVID-19 on Saturday, 354 cases on Sunday and an additional 541 new cases today. The 724 cases reported on Saturday shattered the previous record of 587 new cases set just six days earlier. Prior to the week just ended, the county had reported a total of 4 days over 400 new cases for the duration of the pandemic. The county added six to that in just the last week, missing that number only on Sunday.

The new cases bring the county totals to 27,283 confirmed cases and 2,235 probable cases. About 30% of all probable cases for the pandemic happened in the last week meaning, I suspect, that more people are simply accepting they have it (likely via household spread) and are not bothering to be tested. Probable cases, assuming they are truly cases will also continue to feed our hospitalizations and deaths.

A total of 711 COVID-positive Knox County residents have been hospitalized since the beginning of the pandemic. 146 are currently hospitalized, tying the record set on December 10. Nineteen deaths were reported over the three days since the last article, nearly double those reported last weekend. For a frame of reference, this three-day total equals the number of deaths the county had in the month of August and it follows a three day period that included 24 deaths.

The state reports a 21.8% positive test result rate for the county.

In what I presume will be the last update from the Knox County Schools until next semester, the system is reporting 177 active cases, 1,494 recoveries and 1,652 quarantined or isolated students and staff.