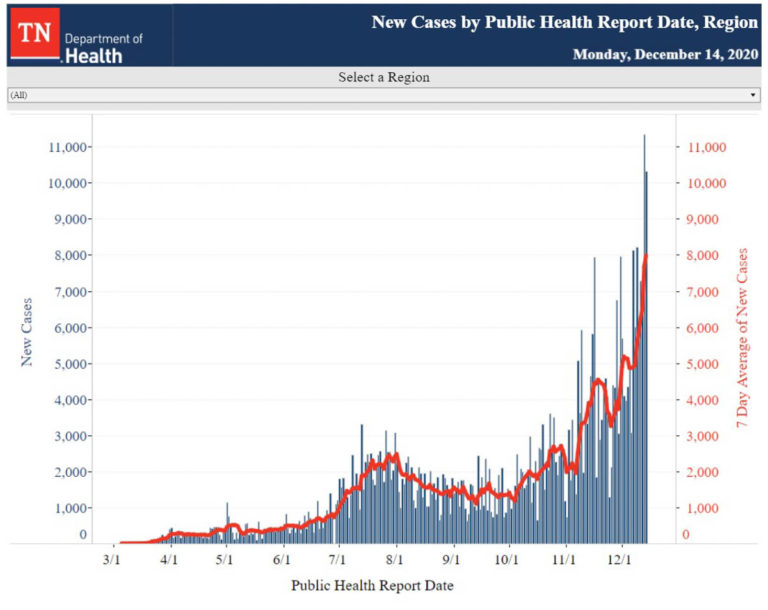 The Elf landed in Urban Boy’s room yesterday morning. It led to speculation: If the elf moves on his own (one theory), Urban Boy should see it, if he stayed up all night. On the other hand, if (as is the favored theory) Santa comes in and moves the elf at night, then we could have a Santa sighting. He promised to call us if that was the case. Alas, tired from a day of work and play, the young man fell asleep. The elf moved on to other parts of the home and the mystery persists. May we all have some mysterious joy in this holiday season.

The state of Tennessee reported 10,319 additional cases of COVID-19 yesterday, marking the second consecutive day over the 10,000 mark. Prior to November 16, the state had never reported a single day of over 6,000 cases. In the month since, eleven days have exceeded that total, including the last seven consecutive days.

The new cases bring the Tennessee totals to 421,528 confirmed cases and 43,096 probable cases. 394,147 people are considered to have inactive cases of the illness and 64,936 Tennesseans currently have active cases of COVID-19. The state is currently averaging 7,985 new cases each day.

The state reported an additional 79 deaths from the virus, bringing the pandemic total to 5,541 Tennesseans who have died of the illness. The seven-day average for deaths in the state has reached 76 per day, the highest number since the beginning of the pandemic. Unfortunately, as cases lead deaths by six weeks or so, the current level of new cases in the state is predictive of much higher numbers of deaths in mid-to-late January.

For the second consecutive day, the state reported an exceptionally large number of tests, providing data on over 59.5 thousand tests. As has been the case recently, the percentage of positive tests at high testing levels is very concerning and was reported as 16.46 percent within the tests reported yesterday. Johns Hopkins reports a 17.3% seven-day average for our state’s positive test rate.

I’ve included a couple of new graphics today to make a point. I won’t include them routinely, but I thought it important to emphasize a point: By multiple measures, Tennessee is doing worse right now than any other state in the Union. Our R rating is number one (https://rt.live/ – the number of people each positive person infects) and our number of new cases per million is number one in the country (https://www.covidexitstrategy.org/).

What does this mean? It means that with the United States being by far the worst spot for the epidemic in the world, and Tennessee being the worst state in the union, this state is arguably the worst spot in the world for the coronavirus outbreak. Further, Knox County has recently had greater spread and higher positive test rates than the rest of the state. This single county arguably is the worst small spot on earth for this pandemic at this time.

Given the above statement, one might hope the state and the county would be moving to take the epidemic more seriously. The biggest news continues to be the governor’s refusal to issue a mask mandate and the decision from the state that state departments of health will reduce their testing schedules.

Please see the final paragraph from the above section if you only read the local section. We are in a serious situation that in some respects can be characterized as the worst spot on earth for the pandemic at this time.

The Knox County Health Department reported 511 additional cases today, marking the third consecutive day the number has been above 500. Prior to these three days, the daily new case number had only crossed 400 two times, both in the month of December. The top nine daily totals have all been reported in the first fifteen days of December. These large numbers of cases will drive hospitalizations and deaths in January.

The 511 additional cases bring the county’s case totals to 24,264 confirmed cases and 1,579 probable cases. Of these, 21,319 are inactive and a pandemic record 4,301 cases are active. 122 COVID-positive Knox County residents are currently hospitalized, bringing the pandemic total to 685. The number currently hospitalized has dropped from a high of 146 on December 10. Given current ongoing case numbers, this will not hold. There is no logical way to conclude that hospitalizations have peaked.

An additional five COVID-related deaths were reported today, bringing the death toll from the pandemic in the county to 56. Half-way through the month, the number is six short of the record set last month and the rate is increasing.

Dena Mashburn chaired today’s meeting. She began with a focus on the vaccine, saying it will arrive this week and this is “incredible news.” She said deciding to take the vaccine is voluntary, but the data indicates it is safe. She pointed out that it will take months for the vaccine to be widely available in our community and we must continue to practice the five core actions.

Noting that the level of inaccurate information has been astounding throughout the pandemic, she said this will likely continue as relates to the vaccine. She encouraged people to utilize the CDC and other trusted sources.

She said the vaccine distribution plan is complicated and will first go to priority groups via hospitals and public health. We anticipate receiving the Moderna vaccine as early as next week. The number of vaccines continues to fluctuate and will only be made public as it is received. The first priority group in the state includes about 450,000 people, including health care workers and nursing home residents, etc. For “healthy 40-year-olds” a late spring or early summer vaccine is likely.

She reported the above numbers

With all Knox County Schools moved to virtual instruction, it is unclear if they will continue collecting data, stop reporting or continue to let the number of active and isolated staff and students dwindle as they are removed from those lists. I’ll watch it and continue reporting if the information keeps flowing.