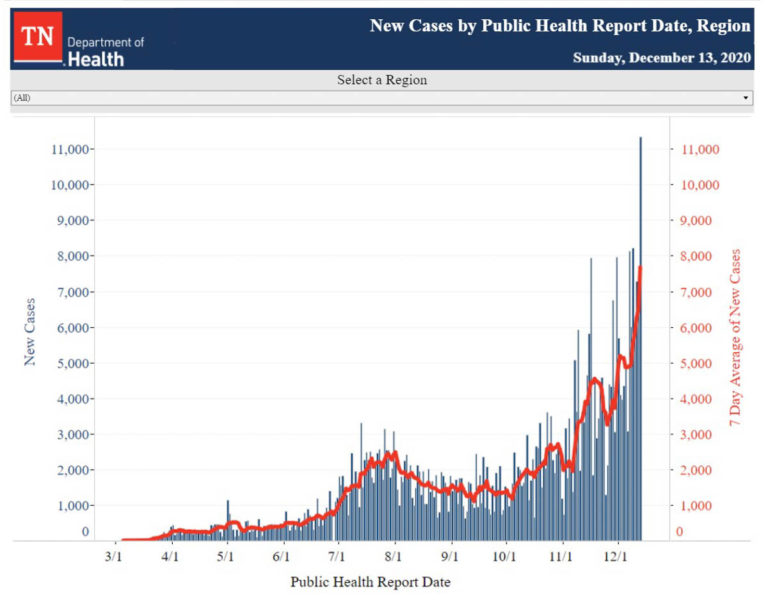 I hope your weekend was a good one. We watched the entire Home Alone series (pro tip: skip the third one), as well as several others. The weather was nice enough to get outside and we did that a bit. The grownups were watching the horrific COVID-19 numbers and the promising reports on vaccines. We have a wild ride ahead of us. Be safe. Don’t get caught letting down your guard when relief may be on the way.

About 73 million people across the world have been diagnosed with COVID-19 since the beginning of the pandemic less than a year ago. The 5.5 million people diagnosed in the last week reflects an escalation from 4.4 million the week before. Just over 51 million have recovered, about 20.2 million cases remain active, nearly a million more than the same day last week. Just over 1.62 million have died, including over 76,000 in the past week, roughly the same as last week.

The previous single-day record for cases, 694,845 set on December 4, was broken this past week with 704,572 on Friday, December 11. One week ago, the average number of daily cases was 616,107 (revised upward from the number I reported a week ago, as Spain and others do not report on the weekends), and it has now risen to an average of 625,111 cases per day.

Deaths remain near record highs but have plateaued for the last week. Last week, the seven-day average for deaths was 10,913 and we are now averaging 10,904 deaths per day. Even with that, a new single-day high death total was set with 12,918 deaths reported on Thursday, December 10.

Germany has announced a severe lockdown beginning next week, including closing all non-essential shops as well as schools. Hong Kong (population 7.5 million) has closed many businesses and taken other stringent measures in response to three consecutive days of 100+ cases. Australia and New Zealand, each of which have had tremendous success battling the virus (New Zealand, 5 million population, 25 deaths; Australia, 25.5 million population, less than 1,000 deaths), are loosening restrictions and forming a “travel bubble.” A study published in the New England Journal of medicine on Friday confirms the hope that an arthritis drug may reduce recovery time.

As state above, the U.S. is averaging 2,519 deaths per day from COVID-19, surpassing average death rate highs from last spring, just this week. The 3,261 deaths reported last Wednesday, December 9, is the highest single-day death total reported in the country during the pandemic.

The states reporting the most deaths continue to shuffle. For the second week in a row, the states with the top five death totals only has two states in common with the same day the previous week. Yesterday’s worst death tolls include Pennsylvania (120), Illinois (107), Texas (101), New York (87) and Colorado (87). Of note, last week on the same day, no state reported 100+ deaths and this week there are three. Last week California made the top five with 55 deaths, this week, that would have ranked only 10th.

Major U.S. news continues to be dominated by the depressing (soaring cases, hospitalizations, and deaths) and the hopeful (vaccines). The first of the vaccines began rollout today in the U.S., with an intensive care nurse in Long Island thought to be the first who got it. After plans were reported showing White House staff would get a portion of the first round of vaccines, President Trump apparently stopped the plan. The change was delivered by tweet with no explanation. Dr. Fauci is saying that we could approach herd immunity by the end of the summer, with near pre-COVID normalcy by the end of 2021.

Over the same three days, the state reported 87 deaths from the virus on Friday, 73 on Saturday and 62 on Sunday. The state is now averaging 74 deaths per day, the highest the average has reached since the beginning of the pandemic. The 87 deaths on Friday constituted the sixth highest daily total so far, with all six falling within the last five weeks.

Johns Hopkins University is reporting a seven-day average of 17.7% positive test results, slightly better than the end of last week, but still about 3 1/2 times where we would hope it to be. In another measure of spread, one method of looking at the level of spread is to measure how many people seem to be infected by each positive case. It is the “r” factor and this website ranks each state daily. As of this morning, they rated Tennessee’s spread as the worst in the country.

Since the last report, the Knox County Health Department has reported 394 new cases on Saturday, 587 new cases on Sunday and 506 new cases today. Each of the two days over 500 are higher than any previous days. The county has only had four days in which over 400 cases were reported and each of those has been in the last fourteen days.

The new cases bring county totals to 23,753 confirmed cases and 1532 probable cases. The seven-day average for new cases is 388, which is more than double the 159 average from the same time a month ago. 21,114 cases are considered inactive, while a new record 3,953 are now active. That number has more than doubled in the last eight days.

Hospitalized COVID-positive Knox County residents now total 132, up slightly from Friday, but in the low end of the range maintained over the last week. The total hospitalized since the beginning of the pandemic has reached 666. Ten deaths were reported over the last three days, including five today. Of these, one was in the 18-44 age group, one was in the 45-64 age group, three were in the 65-74 age group and five were over age 75. The county has now logged 51 deaths for the month and is on track to exceed 110 by the end of December, nearly twice the current record set last month.

In local news, Knox County Health Director, Marth Buchanan, reported having received a positive COVID-19 diagnosis. We wish her a fast recovery. Additionally this weekend, three bars were cited for violating the curfew set by the Board of Health. The three cited were Billiards & Brews, Paul’s Oasis, and Just 1 More Bar and Grille. It was the fourth citation for Paul’s Oasis. The mandate carries with it the possibility of a suspension of a beer license for repeated offenses.

The Knox County School System moved to all virtual classes today following recent surges in cases among students and staff. I’ll continue to report the numbers through this week if they are updated. Once the updates stop, I will discontinue this portion of the report until schools are back in session.

As of Friday, the school system reported 248 active cases, a drop of 18 from the day before. Of these, 175 are students and 73 are staff members. 1,273 students and staff members are considered recovered, while a pandemic high of 2,908 are quarantined or in isolation. This number includes 2,590 students and 318 staff members. The metrics all remained green with the exception of custodial staff and substitute availability.