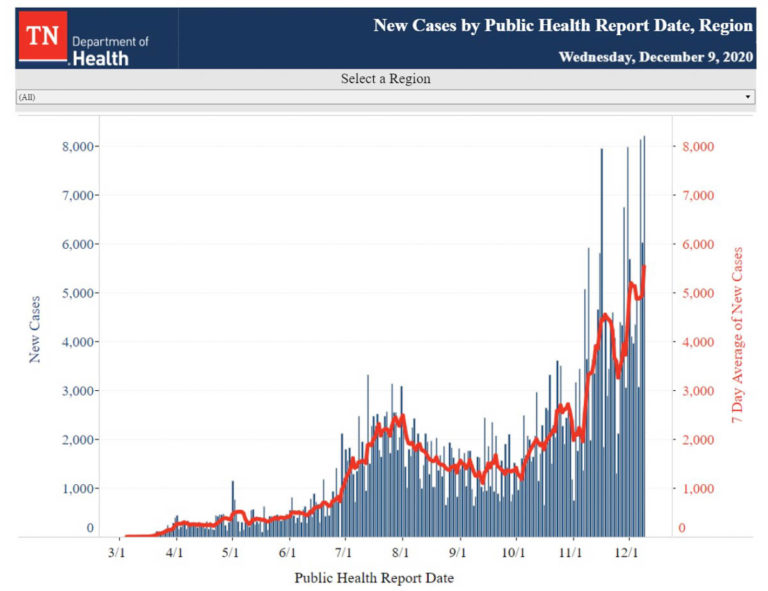 Good Thursday afternoon. As our situation gets more serious, it is a good time to remember to get outside, breathe some fresh air and remember there is life outside our homes and it can be safely enjoyed. It’s also the time of year to watch for warmer days and grab them. The highs today and tomorrow are in the 60s. It’s great weather for a long walk. Whether downtown or elsewhere, get outside and take care of yourself. It is going to be a long winter.

The state reported 62 additional deaths for the day which, while high for us (though lower than the 100 reported the day before), ranked only 18th in the country for the day as deaths surge across the country. The five states with the most deaths each had over 200 for the day and the country set a new record of 3,265 deaths. Tennessee is now averaging 69 deaths per day, the highest that number has reached at any time.

An additional 85 COVID-positive Tennessee residents were hospitalized for the day, bringing the pandemic total to 12,862. As of the most recent day with complete results (12/8), 2,603 Tennesseans are hospitalized with the virus, a new pandemic record. 645 of these are in ICUs across the state and 328 are on ventilators, both also near record highs. ICU beds continue to be the closest to a stress point, with 10% available state-wide.

The state reported results for 44,106 tests yesterday, moving back toward the upper end of our test range and contributing to the larger number of cases. Positive test results continue to be nearly 4 times the level recommended for a thorough testing program, at 18.15% for the day. Johns Hopkins University reports an 18.9% seven-day average for positive test results in Tennessee.

The Knox County Health Department reported 383 new cases of COVID-19 among county residents today. The number is the fourth-highest total for a single day in the county and all four have come in the first ten days of December. The new cases bring the county’s totals to 21,898 confirmed cases and 1,327 probable cases. 18,927 county residents are considered to have inactive cases, while 2,167 are considered active.

A pandemic high of 146 Covid-positive Knox County residents are currently hospitalized, bringing that total to 649 who have been hospitalized at some point. In updated numbers reported yesterday, there are 14 adult ICU beds available in the East Region, including hospitals in Knox and several surrounding counties.

A single day pandemic high of 8 deaths were reported in the county today, pushing the pandemic total over 200 to 203. Thirty-six people have died of the illness in the first ten days of this month, a number greater than any other full month, except November. Of the eight deaths reported today, one person was between 18 and 44, one was between 64 and 75 and six were over 75.

The state website is reporting a 22.2% positive test rate for Knox County over the last seven days.

Charity Menefee chaired today’s briefing and thanked state-level public health workers have done to support local health departments. She started by re-iterating some points made on Tuesday. Regarding contact tracing, she repeated that individuals who think they have been exposed should self-quarantine and continue to do so until they get test results back or ten days have passed. She urged people to contact the people with whom they have had a fifteen-minute or more exposure, with less than six feet of separation. You will likely not hear from the health department.

She noted the above numbers and discussed the benchmarks, all of which continue as red. Regarding cases, she said the last two weeks set a two-week period record. Lab turn-around time for test response is six-to-seven days. She said there have been 15 deaths over the last seven days.

The dominant news regarding Knox County Schools is that, at least for a week, the system is moving to virtual-only instruction for the entire system, much as many other systems across the U.S. have done in recent weeks. In making the announcement, Dr. Thomas, Superintendent for Knox County Schools, alluded to the rising number of cases and of quarantined students and staff as obstacles to in-person instruction, in addition to limited availability of substitutes. The shift begins Monday and plans call for bringing all students whose families have elected in-person instruction back into the schools on January 3.

Interestingly, all metrics remain green, except the two that have been yellow or red for most of the year, custodial and substitute availability. It would seem logical that student and/or teacher attendance would be red for the schools to close. It may be because, once a school goes virtual, all of its students can attend, thus potentially improving attendance by sending everyone home. More strangeness in a strange year.

Prior to the announcement, more schools were added to the virtual-only list and that growing number likely illustrates as much as anything why school officials concluded that in-person instruction had simply collapsed. The list, which had grown from 8 schools to thirteen schools only the day before, increased to 16 schools before the system-wide announcement was made. The sixteen schools are: