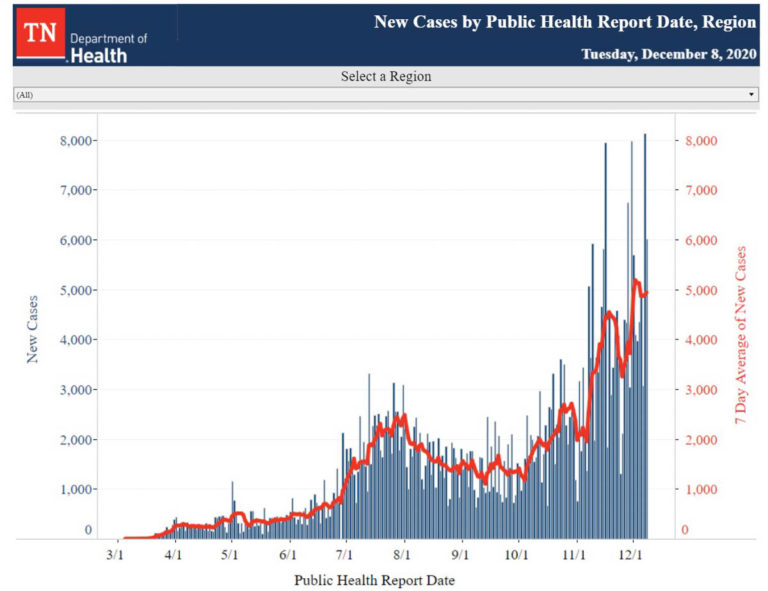 Happy Wednesday, everyone. I come to you this morning fresh off my first intense game of dreidel. I won all the plastic money from the kids, which may not be something I should be proud of. I suspect revenge will be theirs. We also got our Menorah in the mail and we’ll begin lighting the candles tomorrow night. We’ll set it beside the Buddha candles, so we’ll get the glow from both. I suspect anti-Semitic-triple-parentheses-social-media-guy might be disappointed to learn that he inspired us to get a Menorah this year. We will light a candle for him. And for all of us.

Yesterday, the state of Tennessee reported 6,019 new cases, a drop of about 25% from the day before, but a number which would have been a new record as recently as the middle of last month. It becomes the fifth highest day on record, so far. With the new cases, the state has now reported 378,656 confirmed cases and 36,093 probable cases. 371,163 are considered inactive and 38,477 Tennessee residents have active cases of the virus. The state is averaging 4,938 new cases per day.

For the first time since the beginning of the pandemic, the state reported a triple-digit single-day death toll, by reaching 100 deaths for the day. The total tops the previous record of 95 set four days earlier. The death toll from the virus for Tennessee has reached 5,109. About 10% of those deaths (507) have come in the first eight days of this month. The state is averaging a pandemic-high 68 deaths per day.

139 additional COVID-positive Tennesseans were admitted to the hospital yesterday, bringing the pandemic total to 12,777 hospitalized at some point during the pandemic. 2,559, the precise number reported the day before, are currently hospitalized. This reflects the net once those who are discharged and died are removed and new patients are added. One month earlier, the total number hospitalized was 1,485.

Of those currently hospitalized, 646 are in ICUs and 315 are on ventilators. Each of these numbers are near records. Regular hospital bed availability is 14% and ICU bed availability is 10%. The 10% is slightly better than has been previously reported. Ventilators, a major concern early in the pandemic, seem to no longer be a concern, with 73% of the state’s 3,022 ventilators currently available.

The Knox County Health Department is reporting 337 new cases today, a drop from yesterday’s single-day record of 450. As is typically the case, the number of Knox County cases tracks the previous day’s state reports for testing, meaning that when it drops, cases in Knox County drop the next day and conversely, when it rises, our cases rise. Of note, 337 would have been a pandemic record just 3 1/2 weeks ago.

Benchmarks were also updated by the health department and, as last week, all are red. The benchmarks include measures for cases, testing, public health capacity, hospital operations and capacity and deaths. All are moving away from the desired direction.

Hospital numbers are also updated today for area hospitals, including those in surrounding counties. They report 524 COVID-positive patients, 104 of whom are in ICUs and 57 of whom are on ventilators. For comparison, a month ago the same day, those numbers were 260 hospitalized, 71 in ICUs, and 35 on ventilators. Less than 5% of area adult hospital beds and ICU beds are available.

The health department reported one additional death today, that of a person over 75-years-old, bringing our monthly total to 28 after 9 days. Additionally, the county reported a seven-day average 22.67% positive test rate, which remains at odds with the state reported 17.9% positive test rate for the county.

The Knox County School System continues to set almost daily records for numbers of active cases. The total of 244 active cases reported yesterday afternoon exceeded the previous record, 235, set the day before. Of the 244 active cases, 165 are students and 79 are staff members. The number of active cases for students is the highest reported this year, while the number for staff is just off highs set recently.

1,182 students and staff are reported as recovered, while a new pandemic record of 2,856 are in quarantine or isolation. Of these, 2,514 are students and 342 are staff. The total reflects an increase of 133 from the day before. I continue to anticipate a decline in this number as new protocols allowing for 7-to-10-day quarantines to replace the previous 14-day guideline are implemented.

The school system has not changed the metric ratings by which they measure the current severity of the pandemic. All are green, including teacher and student attendance, except for custodial support and substitute availability, both of which remain red. Clearly, there is an attendance issue for staff, students, or both at a number of schools, because schools continue to be closed to in-person learning. The list for today has grown from eight to thirteen, with most closed until after the holiday: