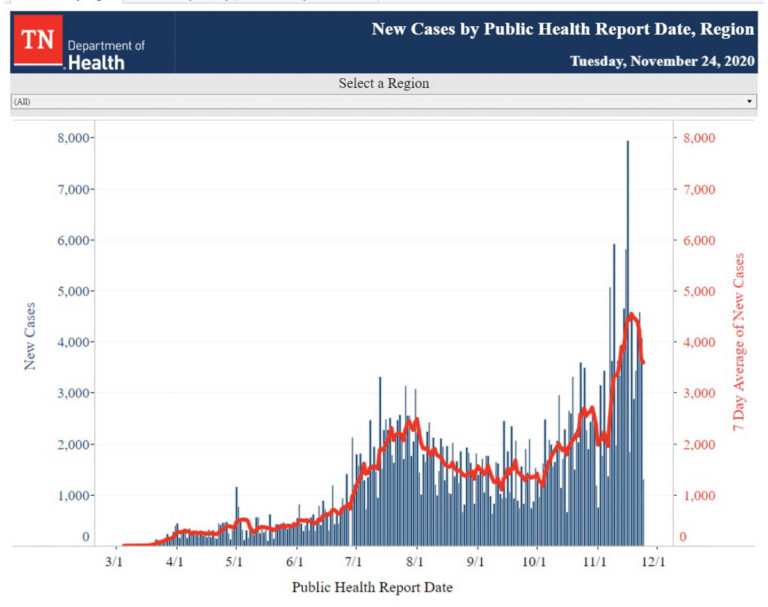 Happy Almost Thanksgiving. I’m going to take a proper day off tomorrow to enjoy the kids and spend a little work-free time being thankful. There is much to be thankful for. We may have to work a little harder to see it this year, but it is worth the effort. I hope you have a happy and safe day. Connect in ways that work for the situation and your family. Please be safe.

I’m not sure whether it is due to the impending holidays or something else is going on, but the state issued their numbers late. When the numbers were issued, the case number had plummeted. A quick glance toward testing numbers revealed why: the state reported its lowest number of test results since early May, at 5,448 for the day.

73 deaths were reported from COVID-19 across the state, bringing the pandemic total to 4,374. It marked the 7th time the state has reported more than 70 deaths for a single day. All have occurred on or since October 30. Over the last seven days, the state averaged 56 deaths per day, a new high.

89 additional COVID-positive Tennesseans were hospitalized in the state yesterday, bringing the total to 11,717. As of two days ago, the last number for which accurate numbers are available, 2,125 COVID-positive Tennesseans are hospitalized with the illness, 569 of these are in ICUs across the state, and 261 are on ventilators. These are new high numbers in each category for the state. A month ago, the numbers were 1,352 (hospital), 410 (ICU) and 172 (Ventilator). Each category has at least 10% capacity remaining currently.

As noted above, testing cratered for the day at 5,448. As a comparison, two days earlier it was seven times higher at 36.6 thousand tests. Eight days earlier, the state reported on a record 61.5 thousand tests. It’s unclear if fewer tests were done, more results were held up at labs or if the state reporting system slowed. It’s not likely we’ll get steadily high or possibly even reliable numbers for the next several days due to the holidays. Many testing centers are closed on Thursday, and some for most of the holiday weekend.

The Knox County Health Department, operating off the same limited number of tests reported above, confirmed 81 new cases for the day, half the number reported the previous day. It brings Knox County’s case totals to 17,324 confirmed cases and 978 probable cases. Of these, 16,176 are considered inactive, while 1,973 Knox County residents have active cases of COVID-19.

As has been the case for several recent days and for the last three consecutive days, Knox County reported a new high for COVID-positive residents in the hospital at 107, up one from yesterday’s record. The new hospitalizations for the day bring the total to 580 Knox County residents who have been hospitalized with the illness at some point in the pandemic.

There were no additional deaths reported for the day. The state website reports the positive test result rate for the county has averaged 12.4% over the last seven days. Benchmarks were not updated as of this report.

This New York Times article from today notes the crumbling tracing system in the U.S., which echoes the statement made by Charity Menefee that people should begin by assuming they are positive if they are tested and beginning to contact their contacts. Many locations are simply giving up as tracing isn’t helpful once the virus has been allowed to get out of control.

With the departure of UTK students for the holidays, I’m assuming this will be the final update provided by the university until such time as students return, slated at this time as late January. I’ll resume updates when they do so.

610 students and staff are in quarantine or isolation. Of these, 101 are employees, 165 are residential students and 344 are non-residential. I’m hoping the 511 students will stay in place and not return home until their isolation is over.

The Knox County School system continues to report record high numbers of active cases and quarantines or isolations. Due to the holidays, I’m assuming they will not update their numbers until next Monday afternoon, meaning I’ll report today and then resume on Tuesday of next week.

It’s interesting to consider the potential difference between this break during a pandemic and a break during a flu outbreak. We generally think of flu spreading at school and that a break, with the students kept apart, is a good thing to break the chain of infection. It seems more likely that most of the cases the schools are reporting are due to non-classroom spread, meaning, depending on what families do, the break could exacerbate the problem.

As discussed yesterday, there are numerous strains on attendance and as of yesterday afternoon, the metric for student attendance was changed to yellow, matching the teacher attendance metric. Both cafeteria and bus service remain green, while custodial and substitute status remain red.

The list for schools on virtual-only schedules remains the same: