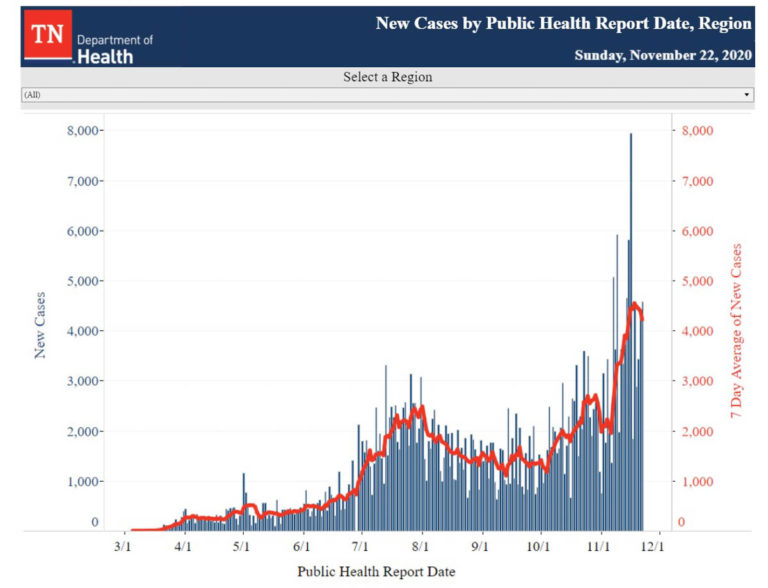 Welcome to another week. I hope you found some time to re-juice this weekend. I am sorry the Vols are not exactly giving people some good cheer. It still strikes me as miraculous that we have college football at all. Still, the days have been beautiful, and we seem to be moving closer to a vaccine and, perhaps, the end to this long nightmare. We need to get through this week in a safe manner so that we do not put ourselves further in a hole before it turns around.

The previous single-day record of just over 660,000, set the previous week, was broken on Friday when 662,957 new cases were reported for the day. The pandemic record for deaths in a day of just under 10,200 set just the week before, was exceeded four times this week, with the current record of 11,239 being set last Wednesday. Global daily averages are currently 581,839 new cases and 9,705 deaths. Last week on the same day the numbers were 575,774 cases and 8,766 deaths. The steep climb in international cases has eased over the last week, while deaths continue to increase rapidly.

Last week there were 51 countries reporting over 1,000 cases for the day and this week the number has risen to 56. The largest group is in Europe, with 23 countries, but there are now 19 in Asia, 7 in South America and 5 in Africa.

Luxembourg becomes one of the latest countries in Europe to impose restrictions, closing bars, restaurants, cinemas and gyms. For the first time since March, travelers may fly into Santiago, Chile. Qantas becomes the first airline to announce that beginning next year, it will require passengers to show proof of vaccination in order to be able to fly on its airlines. UNICEF has a massive effort underway preparing to distribute up to 2 billion vaccines worldwide by the end of next year.

As noted above, the U.S. continues, as it has for months, to far outpace all other countries for new cases and for deaths. The seven-day average has reached 172,789, up from 152,136 a week earlier. Daily records for new cases continue to be set each subsequent week. Going into last week, the record was 187,907 set on November 13th. That number was exceeded twice in the week just ended, with a new record of 204,179 new cases reported on Friday, November 20th.

Deaths, which were slower to increase than cases, are now increasing rapidly in the United States. There are currently 1,547 average daily deaths in the U.S., up from 1,156 a week ago. It is the highest the daily death toll has been since May 15. The two states leading the list of deaths yesterday were the same as last week, though in reverse order, while the other three are new this week: Illinois (99), Texas (77), Florida (59), Indiana (59), and Tennessee (55).

The U.S. government continues to be hit by the virus, with three Republican Senators currently sidelined with the illness, as well as six Republican and one Democratic representatives. In the critical Georgia U.S. Senate runoffs, Republican Senator Loeffler has tested positive and is in isolation. Her positive test came the day after campaigning in person with Vice-President Pence and the Republican in the other race, Senator Perdue. Senator Loeffler has continued to hold in-person crowded rallies in recent weeks, including many people without masks. The report also came this week that Donald Trump, Jr. has tested positive for the virus. He has stated that he is asymptomatic.

For the third consecutive Monday, there has been a major announcement about a vaccine, with a different company each week announcing positive results. Today, it was Astrazenica’s turn, with the company reporting a 70% average success rate, but 90% under certain circumstances. This one is cheaper and easier to distribute. Many U.S. hospitals are now facing critical staff shortages and more expected to run short as U.S. hospitalizations from the virus continues to set new records. Despite pleas to limit travel to reduce the spread of the virus, over 1 million passengers were screened yesterday in U.S. airports, the first time over 1 million have been screened in a single day since March. The same day last year, however, saw 2.6 million screened.

Deaths reported for the state over the weekend were 74 on Friday, 9 on Saturday and 55 on Sunday. Friday’s total is the fifth highest reported during the pandemic, with each of the five coming on and after October 30. The state is averaging 53 deaths per day, up from 43 a week ago. and total deaths from COVID-19 have reached 4,266 in the state.

For the three days since the last report, the Knox County Health Department has reported 202, 240 and 169 cases for Saturday, Sunday and today. Yesterday’s number is the fifth highest single-day total for the county since the beginning of the pandemic, with each of the five coming in the last eight days.

Cases for the county now total 17,081 confirmed and 936 probables. Of these, 15,533 are now inactive and 2,332 are active, the highest that number has reached since calculations were adjusted at the beginning of October. The number is roughly 380 higher than the same day a week ago.

There are a record-setting 99 COVID-positive Knox County residents currently in the hospital, breaking the record set just five days ago. This brings the pandemic total to 562 Knoxville residents hospitalized with the illness since the beginning of the pandemic.

According to the state website, Knoxville currently has a seven-day average of 12.2% positive test results, down from 13% a week ago.

The Board of Health will meet at 5:00 pm this afternoon to consider resolutions including Risk Reduction Guidelines, Limiting Social Gatherings to eight people, Restaurant Capacity and Early Closure, which would limit restaurants and bars to 25% capacity and have them close at 9:00 pm, except for carry-out and delivery. The meeting will be broadcast on the Knox County Youtube Channel, on CTV and CTVKnox.org.

In nearby news, Roane County’s Mayor has ordered a mask mandate for the county, joining Claiborne and Grainger Counties, which made similar announcements over the weekend. The new weekly White House report rates 81 of Tennessee’s 95 counties, including Knox County, as “red” zones and recommends limiting indoor dining capacity and reducing bar hours.

The University of Tennessee is reporting 61 active cases, down from 86 reported on Friday. 2,017 students and staff are reported as recovered. For the three days since the last report, the University has reported 23 new cases.

The number in quarantine or isolation continues to rise and, at 578, is the highest it has been since September 23. The number includes 94 employees, 158 residential students and 326 non-residential students. There are no additional clusters and last week’s testing numbers have not been released. In the previous week, the University Student Health Clinic had an 18.6% positive test rate.

As of Friday afternoon, the Knox County Schools reported 139 active cases, a new record, up from the previous record of 135 set the day before. The number includes 93 students and 46 staff members.

749 students and staff are considered recovered, while a record 2,251 are in quarantine or isolation. This number includes 1,951 students and 300 staff members. The metrics remain unchanged, with Teacher attendance rated yellow, while custodial support and substitute availability remain red. Other metrics remain green.

Whittle Springs Middle and Sam Hill Primary (Pre-K only) could return to in-person instruction today, while Moreland Heights Elementary was added to the list of virtual-only instruction. The current list includes the following: