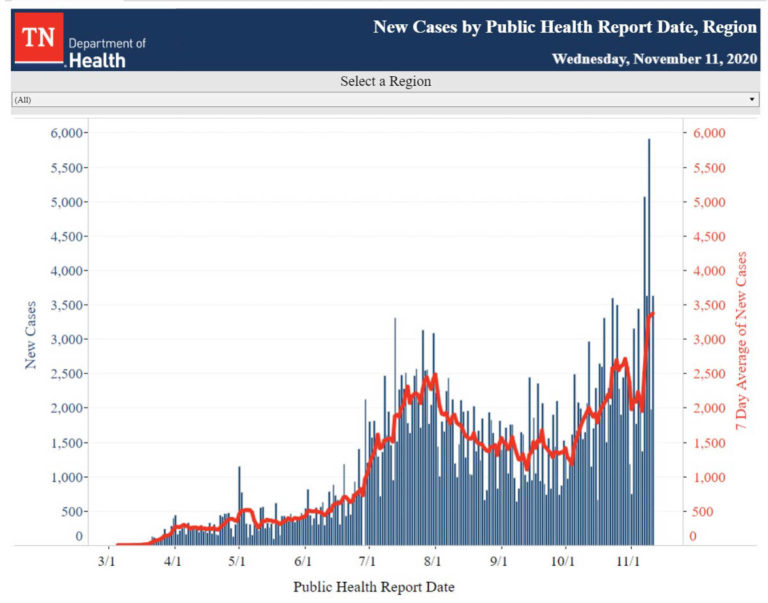 Happy weekend eve-eve. I’m declaring it a thing. As has been reported across the media, this weekend won’t exactly be the same with college football, with a number of games canceled or postponed, including the UT game. Probably the best news is that more seasonal temperatures are coming in and Saturday looks to be gorgeous. It’s another good chance to get outside while we can.

The state of Tennessee reported 3,632 new cases of COVID-19 yesterday, very close to its current seven-day average of 3,369. It’s the highest the average has tracked since the beginning of the pandemic. To underscore how high the current daily reports have become in the U.S., while 3,600 would have earned a top three spot for the day just a few weeks ago, Tennessee ranked only 15th yesterday, roughly in line with its population. The U.S., of course, set a new world record for the second consecutive day with 142,808 new cases.

Tennessee reported its highest daily death total of the pandemic yesterday with 89 deaths. The three worst days for death totals for the state have all occurred in the last two weeks. The trend is consistent with world-wide deaths, which are at their highest level since the beginning of the pandemic, U.S. deaths which have risen over 50% in the last four weeks and local rates which have risen. The 89 deaths yesterday ranked third highest in the U.S. and brings Tennessee’s average daily deaths to 40 for the first time.

Of these, 479 are in ICUs and 222 are on ventilators. Each of these continue the trend of new records being set each day. For the first time since I’ve watch numbers, available beds have gone under 10% for ICU beds. There are currently 9% of ICU beds available across the state. Of further concern, patients are not necessarily spread evenly across the state, meaning some local hospitals will be showing a visible strain soon if the trajectory isn’t slowed. As I noted a couple of weeks ago, Ballad Health hospitals in upper east Tennessee are reporting serious nursing shortages.

The number of reported tests recovered somewhat from its low number the day before, with the state reporting on 29,690 tests for the day, a high average number for the state. The positive test result number was 11.67%. Johns Hopkins University is reporting a seven-day average positive test rating of 11%.

The Knox County Board of Health reported an additional 152 COVID-19 cases today. This marks the 13th consecutive report of 100+ cases for a single day, continuing to build on the record streak. The previous high streak of 11 days was set in July/August.

The new cases bring current totals to 14,800 confirmed cases and 792 probable cases. 13,821 cases are considered inactive and 1,646 remain active. 513 COVID-positive Knox County residents have been admitted to the hospital at some point and the hospitals are currently reporting 75. The record high was set two days earlier at 78.

There were no new deaths reported today for the first time in over a week. The state is reporting the Knox County positive test result rate at 11.5% average for the last seven days.

Charity Menefee chaired today’s meeting. She addressed questions recently received by the health department. She said the PCR test is agreed by experts around the world as the most reliable. She said isolation and quarantine guidelines are not local but are from the CDC and federal government and are based on the understanding of the virus. 10 days is the known infectious period and 14 days is the amount of time an exposure can lead to a new infection. She noted all this is new and could change. She emphasized that a close contact is defined as being within six feet of an infected person for fifteen minutes.

She confirmed the above numbers and discussed the benchmarks, as previously covered on this site. New cases were changed to red. We averaged 156 new cases over the last 14 days. Testing, volume and turn-around time was changed from yellow to red for the first time. Both volume and turnaround time have worsened. Public Health capability remained green. She noted this is becoming more of a challenge. Health Care capabilities remained yellow. Regarding sustained or declining deaths, the benchmark was changed from yellow to red due to recent increases in deaths.

The University of Tennessee is reporting 89 active cases, up two from yesterday, and continuing a slow trend of increases over the last four weeks. The number has more than doubled during that time but remains far below reported numbers earlier in the semester. As the Thanksgiving/Christmas break approaches, it also raises concern that, if this trend is being repeated on other campuses, a potentially massive migration of COVID-positive students across the country may be looming.

No additional clusters have been reported since the October 31 off-campus gathering.

The Knox County School System is reporting 79 active cases, roughly where it has been for several days and just below the semester high of 82 reported earlier this week. Of these, 16 are staff and 63 are students. 418 have recovered from the illness and 1,462 are currently in quarantine or isolation. This number includes 1,328 students and 134 staff members.

Isolations (for those who are positive) and quarantines (for those who have been in contact with a positive case) present probably the largest challenge to schools and to parents. In some respects, it’s easier for some parents to find every day care and have their children learn virtually than it is to suddenly find two weeks of supervision for your child — and then perhaps repeat the same in the upcoming days. Some parents simply do not have good options for doing so.

The concern about the large number who have been segregated, boiled over into discussion at last night’s Knox County School Board meeting. Board members questioned the necessity and effectiveness of the system. Dr. Buchanan responded that it is an essential tool in the fight against the virus and no action was taken.