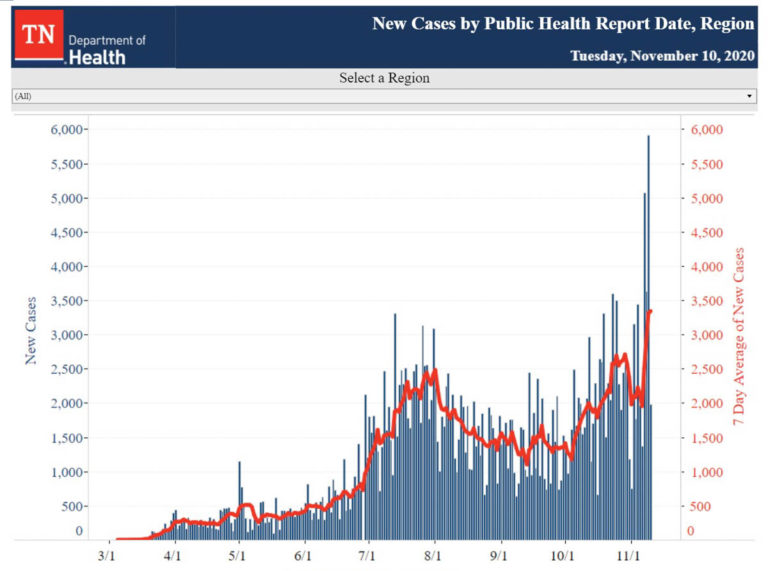 Happy Veterans Day. It’s a strange one, without the annual parade in the city. It’s a good day to quietly remember the sacrifices that have allowed us to have this country we love. May we honor those sacrifices by continuing to love our fellow Americans, no matter our differences.

The state of Tennessee reported 1,979 new cases of COVID-19 yesterday, bringing the pandemic totals to 271,405 confirmed cases and 18,344 probable cases. 256,143 people are now considered to have inactive cases and 11,590 people have active cases of the virus. The seven-day average for new cases is now 3,341 per day.

62 additional COVID-19 deaths were reported in the state for the day. The number is the fifth highest daily total since the beginning of the pandemic. Each of the five worst days have come in the last five weeks. The current seven-day average for deaths is 31 per day.

81 additional COVID-positive Tennesseans were admitted to state hospitals yesterday, bringing the pandemic total to 10,813 people who have been hospitalized at some point. As they have almost every day for the last two months or more, hospitalization numbers continue to rise. There are currently 1,634 COVID-positive Tennesseans in hospitals across the state, up from 1,553 the day before. Of these, 470 are in ICUs and 215 are on ventilators. A month earlier, after the increases had already begun, there were 1,068 in the hospital, 307 in ICUs and 153 on ventilators.

In other state news, albeit with local implications, Tennessee State Representative Zachary, who represents west Knox County, filed a bill for the 112th state assembly to consider, which would remove decision-making power from local Boards of Health in the six mostly urban areas of the state. His bill would move them to an advisory role and have the county mayors make all decisions regarding response to the pandemic.

Vanderbilt University has released a study which places the state’s counties into three groups: Never had a mask mandate, Had a mask mandate early and came along to a mandate sometime along the way. The study looked at the trajectories of deaths in each group and found that deaths continued to rise in the non-mandate group while they, at least for a time, moderated in the other two.

The Knox County Health Department reported 114 new cases for the day, the twelfth consecutive report of 100 or more cases. That said, it is just over half the number reported yesterday. It brings the pandemic totals to 14,648 confirmed cases and 786 probable cases. 13,818 people are now considered to have inactive cases. 1,491 people have active cases, down 201 from yesterday.

Unfortunately, almost half of the reduction in hospitalization numbers overnight may be attributed to deaths, as four new deaths of Knox County residents due to COVID-19 were reported this morning. The entire group is among the over 75 demographic group. It brings the county’s total deaths attributed to COVID-19 to 125.

The four deaths tie the record for most in a single day, with the number being reported twice before, both in July. It brings the November total to 20 deaths from the illness, with 2/3 of the month remaining. The county is within one of matching the death total for the full month of October.

I mentioned it in the Board of Health article earlier, but the metrics were updated, and they are almost universally bad. The metric measuring declines or stability in new cases was changed from yellow to red, as was the testing metric looking at numbers of tests given and turn-around time.

Public health, measuring the speed with which the Health Department is able to trace cases, remained the lone green rating but, for the first-time last night, I heard Dr. Buchanan saying the system is stressed. Hospital capacity remained yellow, but the metric for stable or declining deaths changed from yellow to red.

The University of Tennessee continues to see a slow, but steady increase in active cases among its community. While much lower than the peak early in the academic year, the 87 active cases currently reported is the largest total since September 23. 1,823 students and staff have recovered, and 10 new cases were confirmed yesterday.

390 students and staff are currently in isolation or quarantine, the highest this number has been since September 26. Of these, 52 are employees of the university and 338 are students. Nearly twice as many of the students are off-campus students as compared to on-campus students.

The most recent cluster discovered remains the off-campus party on October 31.

The Knox County School System is reporting 78 active cases, down from 82 the day before. Of these, 58 are students and 20 are staff members. 645 students and staff have recovered from the virus.

1,470 students and staff are in isolation or quarantine, down from yesterday’s record-setting 1,589. The number includes 1,326 students and 144 members of the staff.