The Bistro at the Bijou Celebrates a Remarkable 40 Years 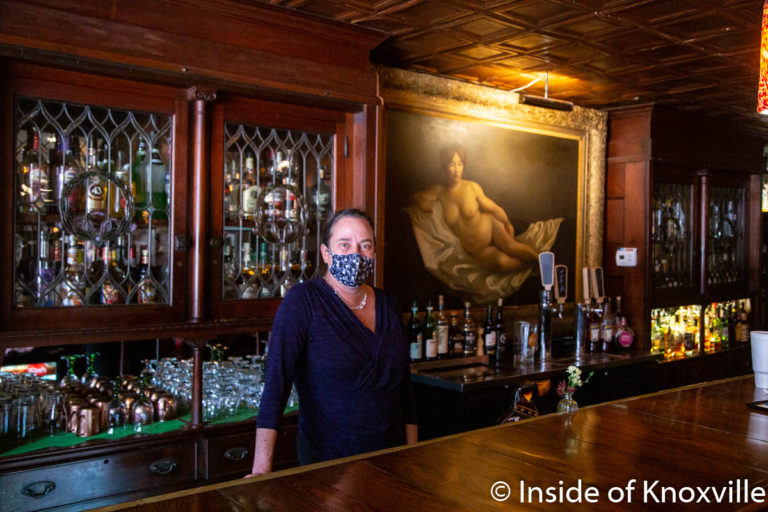 For a business to last a dozen years is remarkable. Twenty or thirty years, impressive, indeed. Forty years is very unusual. In the year Ronald Reagan was elected president, the Bistro at the Bijou began service. Even more remarkable, a bar or restaurant, almost without interruption, is a part of the building’s history from the beginning. The first major event hosted after its opening also involved a President — Andrew Jackson. It’s pretty remarkable to imagine President Jackson bellying up to the bar with friends in the location.

In 1980, Kristopher Kendrick opened the restaurant’s current incarnation as the Bistro at the Bijou. The building had been closed for several years and had re-opened on shaky ground financially and physically – it badly needed major renovation. Kristopher reconfigured the space to roughly its current configuration. It was, according to current owner, Martha Boggs, Knoxville’s first bistro, offering a seasonal and local menu.

He operated the restaurant until 1988 and it went through several hands until Pete Clauson bought it in the early 1990s. Martha had been the general manager at Old College Inn and came to the Bistro at the Bijou in the same role in 1993. At that point she says, it was mainly bar business. “The best part of this business is being able to adapt to what people want. I tried to keep it original and to present thoughtful cuisine.”

She said that Kristopher had a cabaret and a prix fixe menu. By the time she arrived, the order of the day was 10¢ chicken wings and beer. She joked that she thinks they lost money on every sale. From the beginning, she had absentee owners and ran the place as her own. In 2009, she made it official and purchased the business. “Everyone said there was no demand. I always knew that things would get better.” She said AC entertainment was upstairs and she could see changes were coming.

With Bill Haslam’s election, she sensed the momentum for downtown. She proudly says she has “served five mayors. A lot of people were behind me and helped make this successful into the next century. She began making incremental changes to the menu. She brings in everything she grows in her own garden. “Tomatoes started it. We put up hot sauce. I love vegetables.”

The customer base was steady, with swings for shows. Downtown business lunch business has been important throughout but has now been nearly stopped due the virus. “Patience is the hardest — waiting out harder times. If you want instant gratification,” she says you might want to find another business, saying you have to be in it for the long run. “Customers are the best part. I have the privilege of seeing community celebrations and funerals, to be a part of their rites of passage.”

She remembers when things were extremely slow downtown. “Annie’s and Lucille’s did jazz and they closed.” Sometime around 2003 or 2004, she started booking jazz artists one to four times a week. “It felt right.” Saying she started it “on a whim,” Kukuly was her first artist and she also happened to be an employee at the time. UT jazz students began playing, then their professors wanted to play and so, jazz became an institution several nights a week at the restaurant and drew good crowds pre-covid.

When the pandemic hit earlier this year, the restaurant closed for over three months, from mid-March to July 1. She lost some staff and had to replace them but says that time of year is generally slower for her, so that mitigated some of the impact. She also owns Dazzos, which she reopened, but business was slow. She says the PPP money allowed her to reopen, and without it she might not have made it.

She says earnings are still at 25%, but she’s doing the things she’s supposed to do, like limiting seating capacity. She says probably 30% of her revenue was tied to shows there, of which there are none now, of course. Office workers work one or two days a week now and, so, don’t come in as much. “I want to protect my customers and staff.” She’s thankful for the mask mandate. “Without the mandate it would fall to us to enforce mask wearing.”

Of the future she says simply, “I’ll keep doing what I’m doing. The Bistro will continue. It’s an important amenity to the Bijou Theatre.”