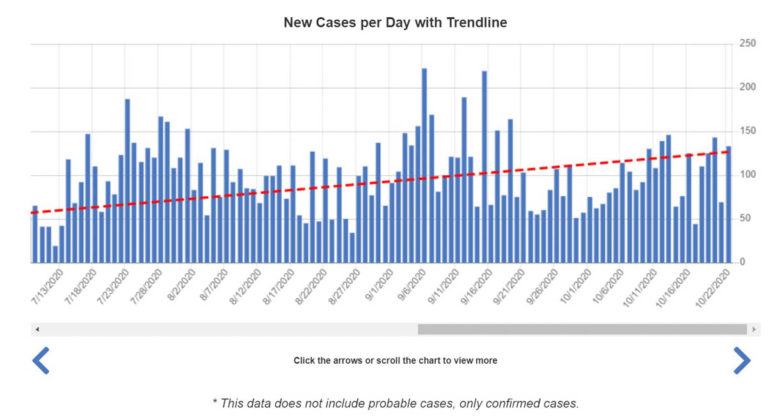 Have you voted? Many of your friends have done so. An interesting note: As of the end of voting yesterday, Knox County is a rare exception in that early voting at polling places is lagging four years ago. The gap has narrowed but remains at 1,248 relative to the last presidential election year. One exception, which is one of the smaller polling places, is the Love Kitchen. As of the end of the day yesterday (halfway for early voting), the polling spot has almost as many votes (4,304) as it totaled last time around (4,363).

Where are the rest of you, Knoxville? Part of that answer is that you’ve sent in your absentee ballot. Last election saw a total of 5,315 voting absentee, while 11,867 have already done so this time around, so with that increase added into the totals, we’re really ahead of last time.

If you have not voted, you still have today and six more days to do so before election day. You’ll find early voting info here. You still have five days to request an absentee ballot, but if you have one or get one and intend to use it, “You must mail your ballot in time for your county election commission to receive it no later than the close of polls on Election Day.” You’ll find more info about absentee ballots here.

The state of Tennessee reported 2,292 new cases of COVID-19 yesterday. The pandemic case totals for the state are now 223,867 confirmed cases and 11,994 probable cases. 210,243 people have recovered, leaving 10,654 Tennesseans who remain ill. Yesterday’s new case total was the sixth highest in the U.S., while the seven-day average for the state is now 2,189 cases per day, roughly equivalent to the first three days in August.

The state reported 18 additional deaths, bringing the pandemic total to 2,970 Tennesseans who have died of COVID-19. The average number of daily deaths, which has been mostly in the 20s in recent weeks, now sits at precisely 20.

53 additional COVID-positive Tennesseans were admitted to the hospital yesterday, bringing the pandemic total to 9,734 hospitalized. There are currently 1,300 hospitalized with the illness across the state, a new high for recent weeks (and perhaps for the pandemic – I’m simply not certain). Within this group, there are 386 COVID-positive Tennesseans in ICUs and 178 on ventilators, each marking a high point for at least the last six weeks.

The Knox County Health Department reported 133 additional cases of COVID-19 among county residents today. The case totals are now 12,059 confirmed cases and 573 probable cases. 11,225 cases are considered inactive and 1,308 people remain ill with the virus. 64 COVID-positive Knox County residents are currently hospitalized, and the pandemic total is 442. Since hitting a high of 70 eight days ago, the number has hovered in the 60s.

One of the more interesting realities of the disease is that more men than women die of the illness. It was noted early in the pandemic when the outbreak was primarily in Asia, and speculation ran that it was due to Asian men smoking more than Asian women. To date, 62 men and 37 women have died in Knox County from the illness.

October started off with only 2 deaths in the first 12 days. In the next ten days, 13 deaths were reported. The total of fifteen deaths so far for the month compares to a total of 27 for the month of September.

Charity Menefee chaired today’s meeting and thanked poll workers, while encouraging following the five core actions while doing so. She confirmed the above numbers. She reviewed the updates on the benchmarks (see yesterday’s post for details). She noted that testing return times have lengthened slightly. Hospitalizations, including ICU and ventilator numbers have spiked significantly, but the hospitals are still meeting needs. She said the increased deaths are what they expected, given the recent uptick in hospitalizations.

The University of Tennessee continues to report slowly increasing numbers, though they remain at low levels relative to the beginning of the semester. There are currently 61 active cases including four employees and 57 students. This is the fourth consecutive day the number has increased. 1,634 have recovered and 12 new cases were confirmed.

The number of students and staff in isolation or quarantine has also risen for the fourth consecutive day and now totals 337. Of these, 29 are employees, 106 are on-campus students and 202 are students living off-campus. There are no new clusters reported. Participation in pooled saliva testing, technically required, has improved to over 70% and higher.

The Knox County School System is reporting 78 active cases of COVID-19 among students and staff, up from 63 yesterday. While some of the increase may simply be more about the school system’s information catching up with data from the break, as much as an increase in cases, comparisons might be helpful: On October 9, the last day before the break, that number was 53. 78 is the highest number reported since students returned in August. The previous high was 67, reported on September 25.

436 students and staff have recovered, while 557 are in quarantine or isolation. The latter number includes 80 staff and 477 students. This number remains well short of the 1,000+ numbers reported for the second half of September and the first half of October. All metrics remain green except for custodial staff and substitute availability, which remain yellow.

All schools are currently open to in-person instruction.