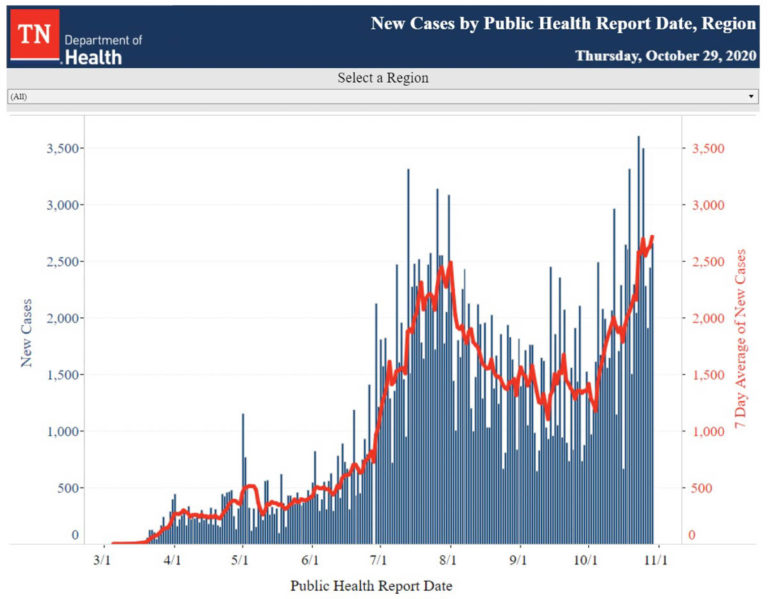 It’s the last update before the weekend and I hope you have wonderful, safe plans. We’ve got a fun Halloween party at the Urban Household for our two young ones. Casper – the old and the new – is on tap, among other things.

A quick note on local voting: 153,197 people voted early and in-person in Knox County, which is up from 135,737 four years ago. So far, 13,080 absentee ballots have been registered (with probably more to come) compared to 5,315 total four years ago. The total of votes cast so far is equivalent to 89.9% of all votes cast in the last election. In the last election, early voting represented 76.8% of the total vote.

We’ll learn in a few days whether more people simply voted early or whether a larger number will vote this time around. My sense is that the polls will be crowded on Tuesday and we’ll have one of, if not the largest voter turnout in the county’s history. As a footnote, I’ve followed the Love Kitchen early voting site and the turnout there more than doubled the turnout from four years ago, from 4,363 to 9,536.

Now a note on comments: I’ve rarely blocked people from making comments, but I’ve done it from time-to-time. Usually, it’s when the person becomes abusive and starts dropping f-bombs. It happened yesterday. When it happened and I looked for earlier comments from that person, it became obvious that person was commenting under three different names, thus falsely amplifying their points. The emails were bogus. Just to be clear: You cannot comment under more than one profile. Just don’t. And if you direct name calling or f-bombs at others, you are done.

22 deaths were reported in the state for the day, bringing the death toll in Tennessee from the virus to 3,263. The seven-day average for deaths in the state is 36 per day. Yesterday, Tennessee reported the 14th highest death total among the fifty states.

68 COVID-positive Tennesseans were admitted to hospitals across the state yesterday, bringing the total hospitalized since the beginning of the pandemic to 10,208. Continuing to use hospitalization totals from two days ago in order to report more accurate numbers, the state reported 1,396 COVID-positive Tennesseans currently hospitalized. Of these, 415 are in ICUs and 166 are on ventilators. Six weeks ago, those numbers respectively were 814, 264 and 125. The increase has been steep and steady.

The Knox County Health Department reported 132 new cases of COVID-19 for the day, bringing the totals to 13,035 confirmed and 652 probable for the duration of the pandemic. 1,453 people currently have active cases. 12,129 people have now cases considered inactive.

67 COVID-positive Knox County residents are currently hospitalized, bringing the total hospitalized since the beginning of the pandemic to 468. Two additional deaths were reported, both of whom represent persons over 75. Total deaths from COVID-19 in the county have now reached 105.

The University of Tennessee numbers remain low relative to mid-September but have continued to rise over recent days. There are now 72 identified active cases on campus, which includes 11 staff members and 61 students. The number, while relatively low, is the highest the university has reported since October 2.

10 additional positive tests were reported yesterday and 324 are currently in isolation or quarantine. Of these, 42 are employees and 282 are students. It is the highest number in quarantine or isolation reported by the university since October 21. There are no new clusters to report and pooled saliva testing has been completed for the semester with extremely low positive test rate. Some of the dorms were close to 3%, while several were below 1%.

She emphasized that campus cases remain low but are spiking elsewhere and pled with the students to continue to maintain safe practices. Dr. Gregg noted that they have been pleasantly surprised that the numbers didn’t spike as they’d expected given the broad testing. He encouraged testing before returning home for the upcoming holiday. Students will not return to campus after Thanksgiving.

The Knox County Schools are reporting 65 active cases, which includes 24 staff and 41 students, precisely the same number reported the day before. 523 students and staff are now considered to have inactive cases and 1,001 are currently in isolation or quarantine.

The metrics used to determine if schools can remain open are all green, except for the two that have been issues throughout the year: Custodial staff and substitutes. In good news, each of those are now yellow, whereas they had been red earlier in the week.