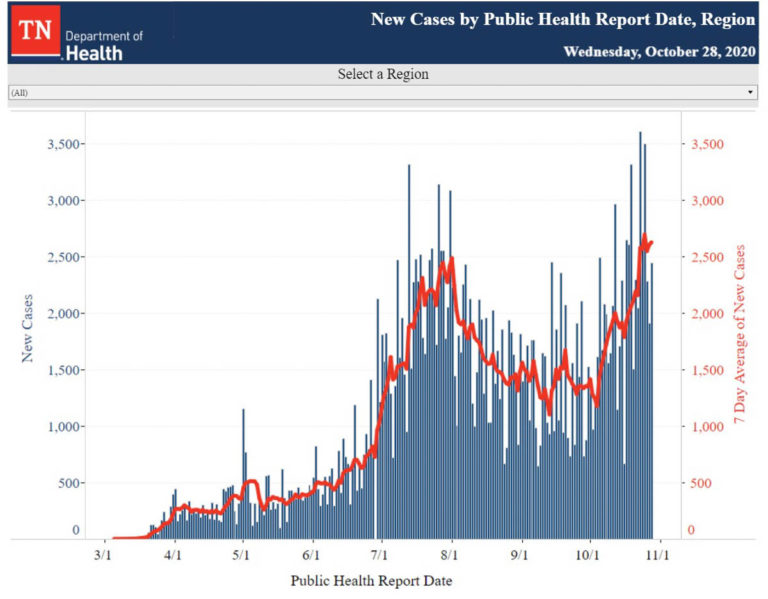 I hope you are keeping dry and safe on this rainy day. My heart goes out to the folks on the gulf coast who have had more than their share of hurricane misery this fall. It’s weird to be at home with the kids who have a two-hour rain delay for virtual school when the walk down the hallway is pretty dry, as far as I know. Strange times.

34 deaths were reported for the day, bringing the total deaths from COVID-19 to 3,241. The seven-day average for deaths is 39 per day. Yesterday the state tied for seventh highest daily death rate in the U.S.

78 additional COVID-positive Tennesseans were admitted to the hospital yesterday, bringing the pandemic total to 10,140 hospitalizations in the state. As I stated yesterday, I am publishing hospital totals from two days earlier going forward, as the initial numbers are often revised after publication and are therefore misleading on publication. As of 10/27, there were 1,360 COVID-positive Tennesseans in the hospital. Of these, 408 are in ICUs and 182 are on ventilators. Each of these numbers have gotten quickly worse over the last six weeks and are at or near their pandemic peaks.

Reported testing numbers for the day rebounded slightly off the low number the previous day and were reported at 22,000, bringing the pandemic total testing to just under 3.6 million in the state. The positive test rate for the day was reported at 10.68%. Johns Hopkins University reports a seven-day average positive rate of 9.5%, a slight improvement over the previous day.

The Knox County Health Department is reporting 75 new cases today, the lowest daily number in the last 8 days. The website initially published a much higher number, but it was an error. Unfortunately, it was up long enough for at least one news site to run the number as a banner headline. With the additional cases, the total number of confirmed cases for the county is 12,903 confirmed and 635 probable cases.

There are currently 1,431 Knox County residents with active cases of COVID-19. No additional deaths were reported, leaving that total at 103.

63 are currently hospitalized, down six from yesterday’s near-record total. Since the beginning of the pandemic, 468 COVID-positive Knox County residents have been hospitalized. The state is reported a seven-day positive test average of 11.4% for the county, up significantly from the previously reported average of 8.9%.

I thought a statement made by Dr. Buchanan in last night’s Board of Health meeting was worth repeating, shortened here to the part that struck me:

I’ll be honest, when I look at our numbers, the pure public health in me says we need to be shutting things down. The practical side of me that has lived and practiced in this county a long time knows that that is not going to be tolerated . . .I think it is going to have to impact a lot more people’s lives . . .

Charity Menefee chaired today’s meeting. She focused on safety while trick-or-treating, including staying within your family unit or keeping six feet of distance. She suggested incorporating your mask into your costume and encouraged washing hands.

She confirmed the above numbers and discussed the benchmarks, which were covered here in yesterday’s article.

The University of Tennessee continues to report very low numbers relative to their initial surge at the beginning of the semester. There are currently 66 active cases reported, up six from yesterday. 1,695 students and staff have recovered, while an additional 8 new cases were reported for the day. The number in isolation or quarantine has continued to ease upward slightly and is now 316. Of these, 41 are employees, 105 are on-campus students and 170 are non-residential.

There continue to be no recently identified clusters.

The Knox County Schools are reporting 65 active cases, including 41 students and 24 staff. The number has dropped slightly and more closely resembles the numbers prior to the fall break. 513 in the school community have recovered and 937 are now in isolation or quarantine. The number in isolation or quarantine has steadily increased since break and is now approaching pre-break numbers. Of the 937, 114 are staff and 823 are students.

The four metrics which have largely stayed in green remain so, but custodial staffing has returned to red from yell and substitute availability remains red. All schools are currently open to in-person instruction.