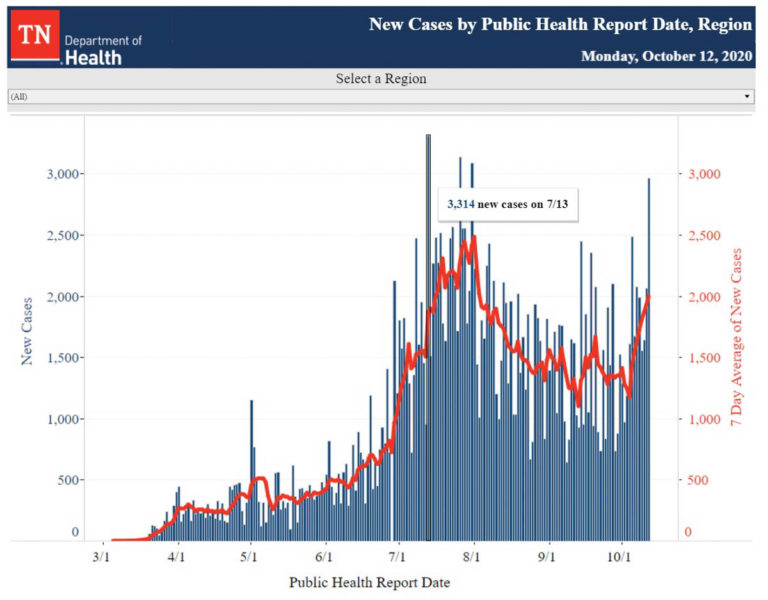 Yesterday, the state of Tennessee reported 2,965 new cases of COVID-19. The number is the highest since July 31 and is the fourth highest of the pandemic. The state fell behind only Texas and California for the most cases reported for the day. The total of confirmed cases during the course of the pandemic is now 207,669, with an additional 10,013 probable cases. 194,836 cases are considered inactive and 10,059 Tennesseans are currently ill. There were seven deaths, bringing the total to 2,774.

Thirty-three additional COVID-positive hospitalizations were reported by the state, bringing the number of people who have been hospitalized with the illness since the beginning of the pandemic to 9,248. The number of current hospitalizations across the state has been revised upward from what I reported yesterday, perhaps because some counties didn’t report over the weekend.

According to the state’s website, hospitalizations have continued to increase for several weeks, and Sunday’s number, which I reported yesterday (815), has been revised upward to 1,056. Yesterday’s total hospitalized increased to 1,068. Of these, 313 are in ICUs and 154 are on ventilators. For comparison, on September 12, those numbers were 789, 264 and 123 respectively.

It should be noted that testing has also surged in recent days, with the number of reported tests for yesterday at just over 39,200. According to Johns Hopkins University, it was the fifth highest testing total reported in a single day since the beginning of the pandemic and played a role in the detection of the large number of infections reported.

That said, we are not over testing, as the positive test rate actually increased for the day to 7.94% according to the state and that number would be dropping if we were finding an adequate percentage of our cases. Johns Hopkins also reports an increase in the seven-day average to 7.1%.

The Knox County Health Department reported 146 additional cases of COVID-19 today. It’s the highest number reported for a single day since September 19. The four consecutive days of over 100 cases is the first since 9/10 – 9/13. While many assumed the September numbers reflected high numbers of UT cases, it’s less clear how to explain the current surge.

Hospitalizations, which tied the record for the highest number at any one time on October 5, has tied or broken a record each day since. The current number of COVID-19 positive Knox County residents is 70, a 100% increase in the last two weeks.

Dr. Buchanan chaired today’s press conference, expressing gratitude for the Health Department staff, who has worked extremely hard for seven months. Since March, the team has done over 20,000 tests, investigated 11,022 cases, 25,855 contacts, provided and coordinated support to over 250 regional health organizations, set up a phone bank which has handled over 43,000 calls, created more than 60 COVID-19 educational videos in five different languages. Even as they have done that, they have maintained their normal activities such as family planning and others. WIC requests have surged to record highs.

She said COVID-19 testing is continuing at Dameron Avenue from 9am to 3pm every week day. She reported the above numbers.

The University of Tennessee is reporting 59 active cases, a number which has remained remarkably consistent for more than two weeks. 1,561 students and staff are reported to have recovered. The university also reported nine new cases among students and staff. 296 students and staff are currently in isolation. The isolation/quarantine number is far lower than it was at its worst, but it is also the highest it has been since October 1 and has recently been rising slowly.