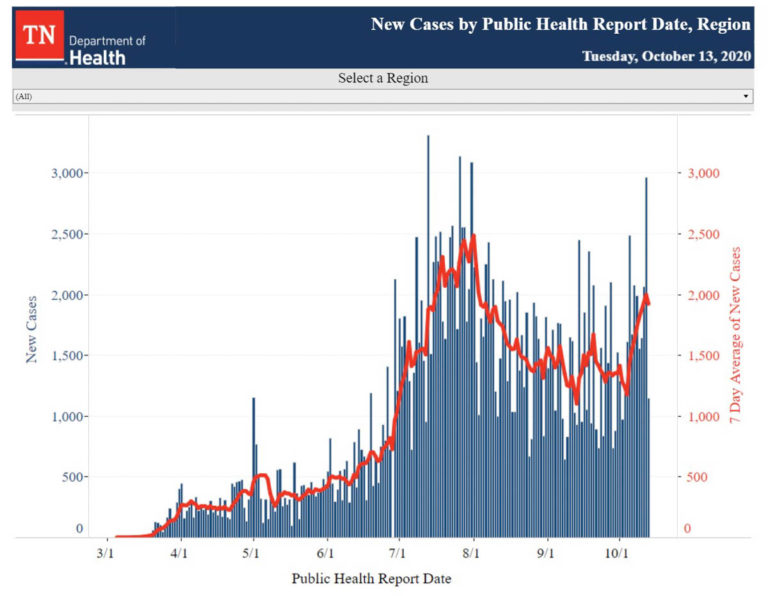 It’s Wednesday! I hope your week is going well, so far. Starting today you have the opportunity to early vote. If you’ve never early voted before, this might be a good year to start. The crowds are generally smaller, though convivial. We early vote almost every time as an extended family, including the little urbans. Our only hope is to believe that America works. The vote is our most powerful tool as citizens. We need the young ones to believe their vote will matter when it becomes their day and ours has passed.

61 additional COVID-positive Tennesseans were hospitalized, bringing the pandemic total hospitalizations with the illness to 9,309. The number currently hospitalized continues to rise steadily, as it has since the end of last month. Currently at 1,101, the number was 793. There are currently 329 people in ICUs across the state and 153 on ventilators. A month ago on the same day, the numbers included 274 in ICUs and 129 on ventilators.

As anyone who has studied the numbers or followed this blog might predict, given the sharp drop in cases over the last two days, there has been a similarly dramatic day-over-day drop in the number of tests given. Total tests given over the two days dropped from over 39,300 tests one day to about 13,900 the next, or about 64.7%. The state reported a 7.77% positive test result for the day’s tests and Johns Hopkins University now pegs the seven-day average at 7.3%.

The erratic numbers of daily tests reporting is likely due to varying reporting times by the large number of labs reporting and doesn’t necessarily reflect the daily number of tests given. It makes daily comparisons almost useless and longer-span averages and comparisons more important. The epidemic wasn’t three times worse the first day or 2/3 better the next. The state numbers, comprised of county numbers also impact the numbers Knox County reports the next day, which leads us to . . .

The Knox County Health Department is reporting 64 new cases of COVID-19, bringing the pandemic totals to 11,234 confirmed cases and 527 probable cases. 10,457 people have cases now considered inactive and 1,217 remain ill. 407 people have been hospitalized since the beginning of the pandemic, including 63 at this time, the first reduction in that number since October 1. The number remains the  highest it has been during the pandemic, with the exception of the previous two days.

An additional death was reported, of a person between the ages of 65 and 74, bringing the total deaths to 90 since the beginning of the pandemic. Benchmarks are due to be updated today, but have not been updated as of this report. The Board of Health meets tonight, after two weeks. The 11pm closure of bars and restaurants is set to expire tonight, giving the board a pivotal and difficult decision to make given recent data and political pressure.

The University of Tennessee is reporting 62 active cases, adding only two students and one staff member to yesterday’s totals. The number has been remarkably consistent – and low – since the end of September. 1,567 students and staff have recovered and five new cases were reported (some obviously rolled off the “active” list).

The number of students and staff in quarantine or isolation continues its slow increase, which began on October 4, though the number remains extremely low relative to the previous peak. 341 students and staff are currently isolated or quarantined, up from 296 the day before. It’s the largest number since September 27.

No clusters have been reported since the ROTC cluster mentioned yesterday.

The Knox County School System is not reporting this week, as students are on fall break (hopefully observing the five core principals).