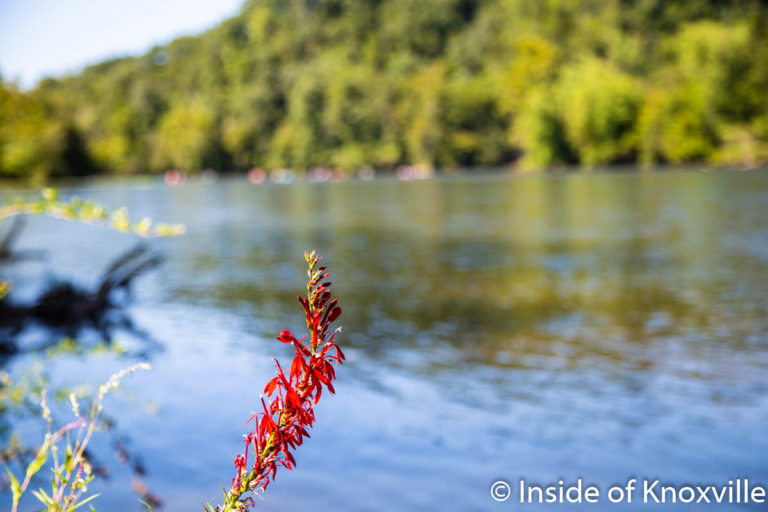 With the Urban children having to stay in so much, we’ve taken to looking for nearby outings that make us feel like we’ve been somewhere. It’s surprising how many little adventures are awaiting within a relatively short driving distance from downtown. It’s not only the younger ones discovering new spots. This weekend we took a trip to Seven Islands State Birding Park and it was new to all of us.

The park is comprised of 416 acres along the French Broad River. Over 200 species of birds have been sighted among the various aquatic and grassland habitats. Of course, we did our typical blundering visit, missing the morning entirely (best for spotting the birds) and likely scaring any respectable wild animal within 30 miles.

So, we didn’t see so many birds. Urban Boy was more interested in running ahead along the trails. From the entrance to the river, a paved trail – more like a small paved road – leads the way. Once you get to the French Broad River, the trails are dirt and smaller. We did manage to spot a couple of small rabbits, both of which ran in terror at the sight of Urban Boy.

While we didn’t accomplish much in the way of spotting birds, I was surprised at the range of beautiful wildflowers and equally surprised at the pleasure Urban Girl took photographing them with her phone or my camera. In addition to the many unusual flowers, they often came accompanied by bumble bees, butterflies or other small creatures.

A large pedestrian bridge crosses the river and offers overlooks in both directions. We stopped there and used our binoculars to watch the fishermen, kayakers and swimmers. The hills surrounding the river are beautiful and the young ones were amazed at the massive fish lurking under the bridge. Urban Boy was certain one was a shark.

The trails were cool and just long enough that the two felt they had visited the wilderness. Urban Boy found some sort of lean-to that someone had  constructed and thought it was the stuff. He was certain he would find a snake inside, which he hope for, but no such luck. He also determined on our way out that he would look for dinosaur fossils. Not much luck on that end, either.

We took a trail that ended on the tip of an island and had a handy park bench waiting for us. We had our snacks, successfully kept Urban Boy from falling into the water and walked back towards the parking lot, with small diversions along the way. Altogether we probably walked four or five miles exploring the park.

There are kayak rentals available and restrooms are provided at the beginning of the main trail in. There are about eight miles of grassy trails and we only experience the tip of that. Cycling is encouraged on the paved trail and before we left, we found a big level spot and the kids kicked the soccer ball to burn off any remaining energy.

There are several ways to get to the park. I went out Chapman Highway to John Sevier and took Thorngrove Pike to Kodak Road. There may be an easier way, but this one featured lots of interesting sights along the way. Our route took about 45 minutes. We had a great time in the park and the kids were excited to top the hill on Chapman and to see the big buildings of the city in the distance ahead.

It’s a visit I would encourage for anyone who hasn’t checked it out.