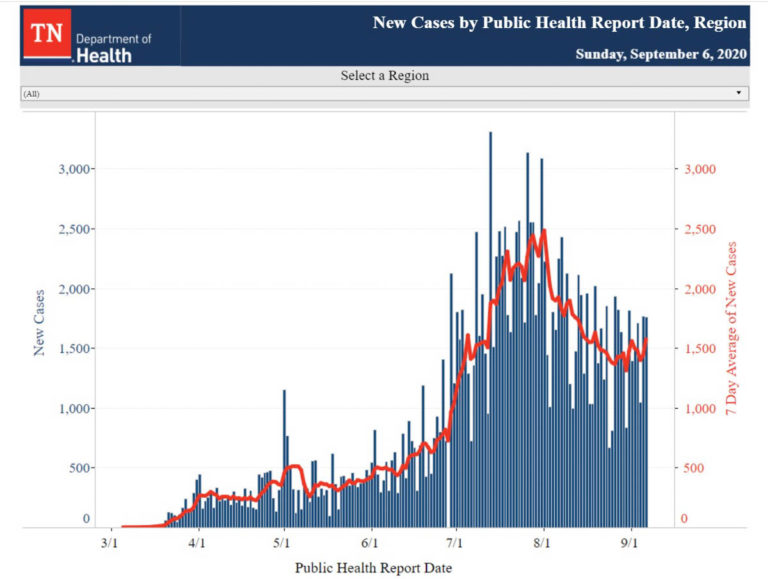 I hope you had a good long weekend and found ways to safely celebrate with family, friends and the people you love. Urban Girl, Urban Boy and I got out to Seven Islands State Birding Park for a lovely afternoon with nature. Knoxville has seen spikes after each of the previous holidays and we don’t need another after this one, particularly since we seem to already be experiencing a sudden increase. It’s that one small exception we make that gets us in trouble, so please remain consistent in safe behaviors.

The number of new cases reported yesterday is about 10.9 thousand higher than the same day last week and reflects the slow trend upward in global cases since August 25 after a short decline. A single-day pandemic record was set on Friday when 300,676 new cases were reported, surpassing the highest total set July 31 (291,631). The seven-day moving average is also setting new highs daily. Previously peaking at 264,366 on August 14, that number was surpassed on Friday and has risen each day since, now sitting at 266,724 cases per day.

Thankfully, deaths continue to slowly decline. The 4,165 deaths reported yesterday compares to 4,183 a week ago. The average daily deaths declined over the same period from 5,428 to 5,336. India is now out-pacing all other countries in daily deaths, averaging over 1,000 each day, and steadily increasing. The top countries in reported deaths yesterday were India (1,008), followed by a cluster far below: Mexico (475), Brazil (456), and the U.S. (432).

Twenty-five different countries reported at least 1,000 new cases yesterday, two more than the same day last week. Sixteen countries reported multiple thousands. The same three countries lead the world as was the case last week: India (91,723), the U.S. (31,110) and Brazil (14,606). While the U.S. and Brazil continue to see a slowing in reported cases, India’s cases have exploded and continue to rise, setting records each of the past five consecutive days, including today’s world leading single-day number for the entirety of the pandemic. At its current rate of increase, India will be adding more than 100,000 new cases within the week.

In addition to India, another big story is what is happening in Europe, where new cases are, once more, rapidly increasing. France is now averaging about 6,700 new cases per day, which is far above the peak of about 4,500 it experienced last spring. This is happening as schools prepare to open across Europe and cases are rising in the UK, Germany, Spain and others. In an odd side note, Spain has not reported numbers of cases since last Friday.

Sweden has caught a lot of interest from the beginning of the pandemic for their alternative approach. Their death rate early was very high, but is currently one of the lowest in Europe. NPR did an excellent report on the topic this weekend. Nationwide trust in the government, which is currently at near 80% seems to have been the key. South Korea is developing a single test that can diagnose both flu and COVID-19, a development that would be very helpful as we head into the Fall and flu season, given that the two illnesses can present similar symptoms.

The 31,110 cases reported yesterday compares to 33,981 a week ago the same day. The average daily cases continues to trend downward, with the seven-day average dropping during the same period from 42,685 to 41,895 per day.

Deaths have also continued to decline in the country, though yesterday’s total of 433 deaths was slightly higher than the same day the previous week (371). The seven-day average for deaths has declined over the last week to 864 deaths per day, from 951. States leading in deaths yesterday were Texas (81), Florida (60), and Louisiana (58).

The IMHE model is now predicting over 410,000 deaths from COVID-19 in the U.S. by January. One wedding in Maine has, directly or indirectly, produced 147 cases and three deaths. Reuters reported that cases are rising in 22 states as we entered the Labor Day weekend. And, just to be clear, the CDC has not reduced the death toll of COVID-19 to 6% of its previous level. Here is one of many good videos explaining the reporting and causes of death:

Since Friday, the state of Tennessee has reported about 2,600 new cases of COVID-19, including 1,764, yesterday. The pandemic total for Tennessee is just over 164,000. Three deaths were reported yesterday, bringing total deaths in the state to 1,865. The state has shifted from reporting “recovered” cases to reporting “inactive cases.” That said, I cannot find that number on the state website as of today and therefore cannot calculate the number of active cases in the state.

A week ago, I reported 784 hospitalizations, but now the state website lists that number at 900, so cases went up by what was previously reported, and down by what they are now reporting. This has the unfortunate effect of making current numbers smaller by excluding pending cases and makes a decline almost inevitable by including them retroactively. There are 127 pending cases reported as of yesterday.

Testing continues at a diminished, though still relatively high level. About 20,000 tests were reported yesterday, bringing the pandemic total to about 2.3 million. The state is reporting a 9.45% positive test result rate, while Johns Hopkins reports a 7.7% seven-day average for the state.

Due to a state shift in calculating active cases over the weekend, Knox County saw a drop from a record 2,407 active cases reported on Friday to 1,573 reported on Saturday. Rather than keeping cases listed as active for 21 days, the state has dropped that number to 14 days. It makes the numbers going forward difficult to compare to past numbers.

All that said, Knox County is seeing a serious increase in cases. How much of that is due to UT is impossible to tell from the data we have provided because we don’t know how many cases from UT are included in Knox County numbers. After not seeing two back-to-back days of 100+ cases since July 31/August 1, the county has now seen six consecutive days above 100.  On Sunday, the Knox County Health Department reported 222 new cases, shattering the previous high of 187 set on July 27.

Today, the Knox County Health department is reporting 169 new cases to bring the pandemic total to 7,575. It is reporting 1,826 active cases, up by 250 since Saturday. After setting a new pandemic record of 50 COVID-positive Knox County residents in the hospital over the weekend, that number dropped to 41 today. There was one additional death reported today, bringing the total to 63. There are 267 probable cases and 5,953 people are listed as inactive.

The benchmarks, which include a caution regarding custodial staff and a red rating for substitutes, remained unchanged. That latter metric apparently led to the first school closure since the beginning of the school year, when the announcement was made over the weekend that Cedar Bluff Middle School would be closed for a week due to a lack of substitute teachers. Students will shift to virtual learning and continue their lessons there until next Tuesday. The statement did not address the reasons for the high teacher-absenteeism that required substitute teachers.

The University of Tennessee did update its numbers today, and the trajectory remains steep for active cases. Active cases increased from 480 on Friday to 590 today, an increase of about 22.9% over the weekend. The overwhelming majority of these, 584, continue to be among students.

Additionally, 1,993 students and staff are in quarantine or isolation, an increase from 1,442 reported on Friday, for an increase of 38.2%. Of these, 959 are non-residential students (off-campus) and 950 are residential. The largest category from these numbers (46.2%) consists of close contacts. Over 21% have tested positive and 26% of the total have developed symptoms. No additional clusters were identified.