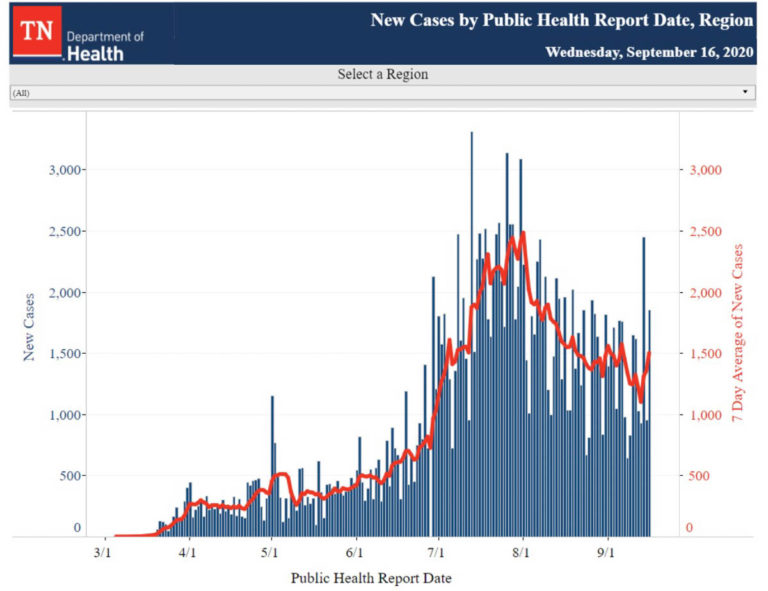 In a year that has felt a lot more like “A Hard Rain’s A-Gonna Fall,” than not, a gentle autumn rain is a welcome thing. I suppose we’re getting the edge of the hurricane, but we’ve also got the promise of cooler temperatures. The rain feels comforting for us, where it was threatening for others to our south. It’s not unlike the choice we all face – to bring comfort or despair, kindness or abuse, words of reconciliation or angry and bitter words. Let’s choose well.

74 additional COVID-19 positive patients were hospitalized yesterday, across the state, and the hospital census for these patients moved upward slightly to 823. 267 ICU patients are COVID-positive, as are 133 who are on ventilators. The numbers have been stable for the last week, but declined significantly in the weeks prior to that point.

When she visited UTK yesterday, Dr. Birx specifically mentioned concerns regarding the level of testing in Tennessee, saying it had dropped by 50% in recent weeks. In addition to dropping over-all, it is reported in bursts which lead to wild fluctuations in numbers of cases. Almost 28,000 tests were reported yesterday to bring the total to about 2.54 million since the beginning of the pandemic. For the day, the state reported an 8.21% positive test rate, while Johns Hopkins reports a seven-day average of 6%.

The Knox County Health Department reported an additional 151 Knox County residents have tested positive for COVID-19 today, bringing the pandemic total to 8,807. Of these, 6,892 are now inactive, while 2,183 remain ill.* One additional death was reported today, for a total of 68. The person who died today fell in the 65 – 74 age range. 336 cases are reported as probable.

34 COVID-positive Knox County residents are currently hospitalized. The number is lower than it was a week ago and about ten below where it was for the two weeks prior. A total of 320 people have been hospitalized at some point during the pandemic.

*Editor’s Note: These numbers do not add up. The number of total cases (8,807) should equal inactive (6,892)+active (2,183) +deceased (68). Clearly, it does not. This is because the probable cases are not included in the total case number, but they are included in the other numbers. Increasingly, at the state and local level, the two are being blended. For the sake of consistency, I’ve continued to separate them where I can. At some point, I may need to accept the number they report, with the understanding it includes probable cases.

She discussed how to watch sports safely with friends. She said to limit the size of the group and advised outside, if possible. She said to space by six feet, do not congregate around food (pre-plate or bring-your-own) and to wear masks if distancing is not possible.

She acknowledged the numbers reported above and reported on the benchmarks – which I covered in yesterday’s article.

The University of Tennessee reported improving case numbers for the third consecutive day. The current number of active cases is 435, and the number has dropped rapidly – by 35, then 146 and now 64. Of the active cases, 421 are students and 14 are staff. But there is a question . . .

The number of recovered cases, now at 845, is going up, which explains the drops – until today. A reader pointed out to me that recoveries went up by 31 from yesterday to today, but active cases dropped by 64. Where did the other 33 cases go? A case is resolved by recovery or death and no deaths have been reported. I’ve forwarded the question to UTK, but haven’t heard back at this point. I’ll let you know if I get an answer – and thanks for the tip!

No clusters have been reported since September 8.

Yesterday afternoon, the Knox County Schools reported a total of 47 active cases, up from 42 the day before, though lower than last week’s 54 on the same day. 38 of the currently active cases are students and 16 are staff members. 181 students and staff have recovered.

One of the most difficult obstacles for the school system has been the number of students and staff quarantined or isolated. That number is currently reported at 902, which breaks down to 842 students and 60 staff, most there presumably due to exposure, though that exposure wasn’t necessarily in schools. The total number has shifted very little over the last week.

The metrics watched by the system remain unchanged, with teacher attendance, student attendance, bus and cafeteria attendance all in green, custodial attendance in the yellow and substitutions in the red. Ms. Wagoner said at the Board of Health meeting last night that they have detailed metrics on each of the specific schools, as well, and can use that to make more precise interventions like the recent decision to close Cedar Bluff Middle for a week. No other schools have been closed at any point.