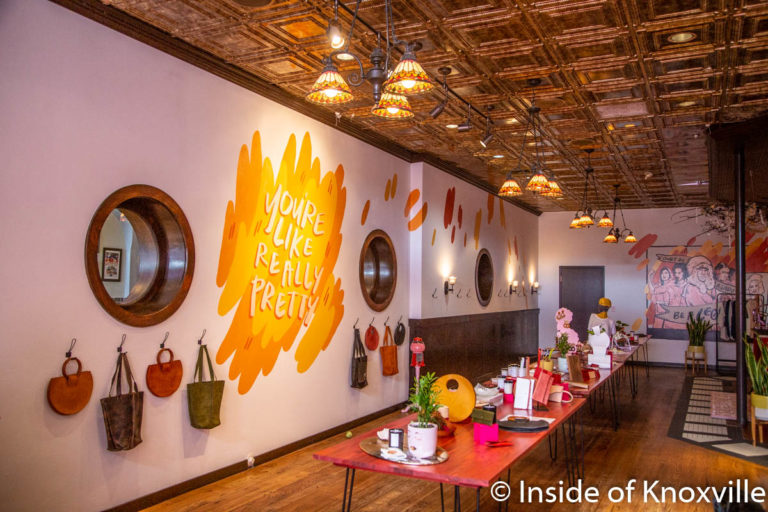 Honeymouth will open this Friday, offering the newest retail shop in the downtown area. Located at 125 South Central in the Old City, the shop features artist made leather goods, clothing & accessories by owner Georgia Vogel. Also featured at the opening will be jewelry by AFC Jewelry and plants by Oglewood Avenue.

Georgia also teaches art at South Doyle Middle School and was born and raised in Knoxville, attending Webb School and then UTK, where she obtained a BA in Art with a focus on printmaking. She moved to Brooklyn, New York for two years after graduation to work with installation artist Anita Glestra, who she describes as a “powerful, impactful woman” and said it was “a wonderful experience being there with her.

After two years, she returned to Knoxville where she re-enrolled at UTK where she got an M.Ed. in Art Education. She says she’s always connected well with young people and their “creative, impressionable minds.” She taught for five years at Farragut High School before shifting to South Doyle Middle, which is closer to her home.

She credited Margie Luttrell, an art teacher at Webb, for helping her along her journey, but said, “I’ve been making art as long as I can remember.” She added that she thinks of “art as a community and therapeutic process,” a value she wants to put forward in her new venture.

She didn’t start working with leather until after she’d finished college, though while there she engaged in a bit of taxidermy. She said she’d noticed the birds that died flying around in the Arts and Architecture Building on campus and found a beautiful Finch. As with much of her work, she focused on the possibility of re-use and started using the birds in art installations.

She later started getting hides and, still wanting nothing to go to waste, began making leather objects. When relatives or others would kill animals and weren’t using the hides, she took them and stored them in her parent’s freezer. She tried tanning hides, but found it very difficult. She and Erin Kalb, a friend who was also a co-worker, got a grant to take a leather-working course with an artisan from Project Runway and the two began the business. Georgia has since assumed sole ownership.

The first thing she made was a belt for her sister and it spiraled from there. From the beginning she’s included an inspirational or empowering quote on every product, though it may not be readily visible. She wanted for herself and others to be mindful of what they carry with them. She wanted a line of consumer projects that brought whats inside to the outside. You’ll notice the quote from “Mean Girls” on her wall, “You’re like, really pretty.” She loved the quote and thought it should be served up as an affirmation.

She’s always dreamed of making her work her business, even as she worked several jobs to make it happen. She envisioned a community space which encourages kindness and self-love. “I want people to come and create.”

She started Instagram sales 2 1/2 years ago and built her website afterward. She said sales have been good and the community support has been amazing, but she wanted to feel even more connected the community and feels that leather goods need to be seen and touched. She wanted to meet the people who purchased her products and wanted them to meet the artist and here the story of the work.

That said, she’s been surprised at how contacts with customers via social media have also turned into real and tangible relationships. She remembers fondly the first purchase which came from someone she didn’t know. She was thrilled and eventually, that came to represent her larger customer base, with many returning to purchase multiple items.

The particular spot she has landed also reso

nates deeply for her. Located in a portion of the former Crown and Goose, she bartended there while in college, working with Jeff DeAlejandro who she considers a mentor. She also met her future partner working at the business and later worked for Jeff again at Oli Bea. She feels like she grew up in the space.

Jeff encouraged her to make the move to a physical location and when the space beside his new butcher shop became available, it felt right. She was supposed to open in December, but construction delays pushed it into the new year. When the pandemic hit, Thomas Boyd, owner of the property, told her to open when she was ready and has been very supportive throughout.

Georgia said that when the shop opens on Friday for the Grand Opening, there will be about three to four times as much product as you see in the photographs. When you enter the shop you’ll see murals made by a former student and you’ll find a wide range of men’s and women’s leather goods. She’s continued to make belts, which are hand-painted and customized. You’ll also find leather jewelry, altered vintage clothes and hats. She’s working on an embroidered clothing line and everything is sewn by hand.

She’s taken an apprentice who will be helping her with the leather work as she progresses. She began by making masks and the business has given away about 1,000 so far. You’ll find beautiful masks for purchase in the store, as well. 10% of profits are donated to local charities and Georgia imagines one day having a non-profit.

Saying she’s had an “army of incredible people behind me,” she wants to pay that forward, particularly in support of “female makers.” Both the jewelry and the plants you’ll find for sale in the shop come from female-owned businesses and Oglewood Avenue is the first African-American owned plant business in the city.

You can stop by Friday or for the special hours this weekend from 11 – 7 on Saturday and Sunday. Next week regular hours will kick in from 11 – 6 Wednesday through Friday and 12 – 6 on Saturday and Sunday. You’ll be likely be greeted by Georgia’s mom, who will operate the store and Dozer the shop dog. Connect up with the business on Facebook, Instagram and their website.