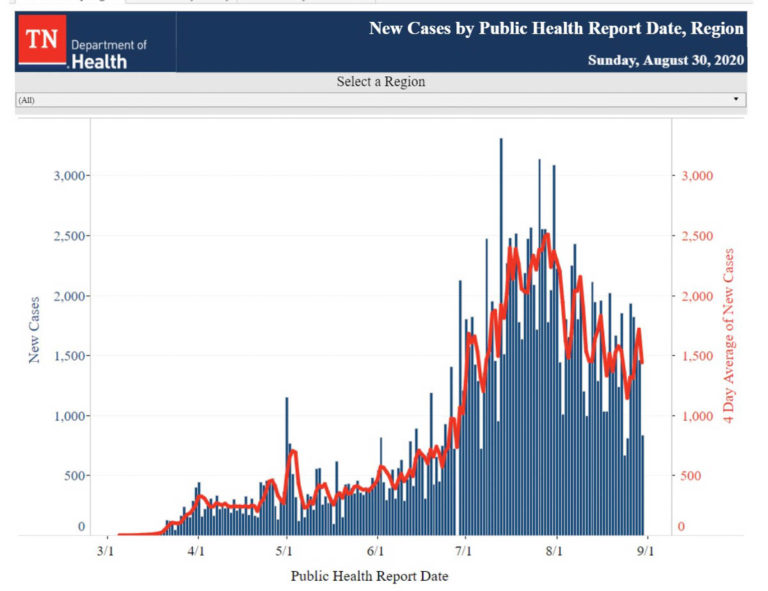 Welcome to another week of working our way hopefully forward through this mess and backward to something normal. I hope you made some time to enjoy the weekend. We did a little socially-distanced visiting, celebrated a birthday, played games (I own a monopoly losing streak to a five-year-old) and spent great time on the balcony considering the world as it passed by.

I also spent the weekend being overwhelmed at the level of support I’ve gotten for the blog. Clearly, it is valued by many of you. Over 300 generous donations came in, many in the form of monthly or annually recurring donations. Expect to see some long-overdue upgrades to the website in coming months as a result. Thank you all, very much. I’m humbled and appreciative.

As a reminder, I will write the full report from International and National down to local once each week, on Mondays starting today. The mid-day report for remainder of the week will be focused on State, Local, University of Tennessee and Knox County Schools information. Let me know what you think about the shift.

The number of new cases yesterday is about 11,000 greater than the number the same day the previous week, raising the seven-day average number of cases reported being reported daily to 253,291. The seven-day average of daily cases reported has been increasing across the world for the last five days after a previous decline. The number remains below the peak of 264.3 thousand on August 14.

The 4,183 deaths is about 100 fewer than the same day the previous week. The average number of daily deaths has been slowly declining from its recent (mid August) peak of almost 5,900 and now sits at 5,428 deaths per day. Based on the most recent year for which I spotted global information (2016), if deaths from COVID-19 average 5,000 per day for the remainder of the year, the illness will be the seventh or eighth leading cause of death in the world and will kill about 1,500,000 people.

Twenty-three different countries reported 1,000 or more new cases yesterday. Leading the world in new cases, yesterday, were the same three countries, in the same sequence as a week ago: India (79,457), the U.S. (33,981) and Brazil (15,346). The three countries were the only ones reporting more than 10,000 new cases for the day. Together, the three reported more than half the new cases in the world. India has set a new record for new singled-day cases five days in a row.

An outbreak has been reported from a flight between Greece and Wales and all passengers and crew have been asked to quarantine, as international travel continues to produce spread of the illness. On Friday, France reported its second highest single-daily number of new cases since the beginning of the pandemic (7,379), just a couple of hundred short of the March 31 record. The average daily cases are now higher there than they were at the earlier peak. Some of the increase can be attributed to increased testing, but not all of it. It makes this past weekend’s start of the Tour de France a large, tricky experiment.

New cases, which fell precipitously for four weeks seem to have stabilized around 43,000 new cases per day. Today’s seven-day average sits at 42,685, up slightly from the day before, but about 500 fewer than the week before.

Ten states reported 1,000 or more cases yesterday. Last week on the same day, that number was nine. Three states reported multiple thousands (the same as last week): California (3,817), Texas (2,757) and Florida (2,583). Even as mid-western states move up the list (7 of the top 20 for the day), southeastern states continue to have high daily numbers. Yesterday, in addition to the two southeastern states in the top three, other southern states ranking highly included Louisiana (#5), Alabama (#6), Georgia (#7), South Carolina (#9), North Carolina (#11), Virginia (#12), Tennessee (#15) and Mississippi (#19).

Yesterday, the state of Tennessee reported 835 new cases of COVID-19 and 22 additional deaths, bringing those respective pandemic totals to 153,115 and 1,747. 670 people were counted as recovered yesterday, leaving the active total at 36,599. The number is about 1,800 fewer than the active cases one week earlier.

An additional 23 people were hospitalized yesterday, bringing the pandemic total to 6,840. Hospitalization numbers are currently 784 COVID-positive patients across the state, with 293 currently in the ICU and 142 on ventilators. Compared to a month earlier, these numbers reflect significant improvements. On July 30, 1,127 people were hospitalized, with 398 in the ICU and 206 on ventilators.

Daily state numbers continue to be sharply erratic, directed by the erratic number of tests being reported each day. Two days under 1,000 were followed by three days in the 1,500 to 2,000 range, followed by another low number reported yesterday afternoon. Testing was 12,000 to 15,000 each of the low days and and in the 21,000 to 27,000 range each of the high days.

The state has given a total of almost 2.2 million tests since the beginning of the pandemic and currently ranks sixth in the U.S. for tests given per capita. Of concern, is the fact that the positive test result rate has risen from 5.2% about a week ago to its current level of 6.4%. In other news, the governor has extended his executive orders through the end of September. Among other things, this means that the Knox County Board of Health can continue to meet virtually.

Locally, the Knox County Health Department is reporting 65 new cases today, following 137 yesterday and 77 on Friday. The total since the beginning of the pandemic is 6,551. Two additional deaths were reported this weekend, bringing that total to 58. 264 people have been hospitalized, with 42 COVID-positive Knox County residents currently hospitalized. There are an additional 235 probable cases. The number of current positive cases is the highest it has been since August 18, but has remained in a relatively narrow range (2,100 to 2,400) for the entire month.

The University of Tennessee numbers continue to increase with relative rapidity. The number of active cases reported this morning is 210 (205 students and 5 staff). The number reflects a 37.3% increase since Friday. As a result of these cases, 983 people are in quarantine or isolation, including 543 non-residential students, 377 residential students and 63 employees. The number in quarantine/isolation has increased by 21% since Friday. Two additional clusters were identified over the weekend, at Delta Delta Delta and Alpha Delta Pi sororities. The four clusters so far have included three sororities and an off-campus party, neither fraternities or dorms have so far seen an outbreak.

An email was sent to Knox County School parents this weekend suggesting there could be targeted closures at any time of a grade level or school and that parents should be prepared. They said they would try to give notice, but that it might not always be possible.