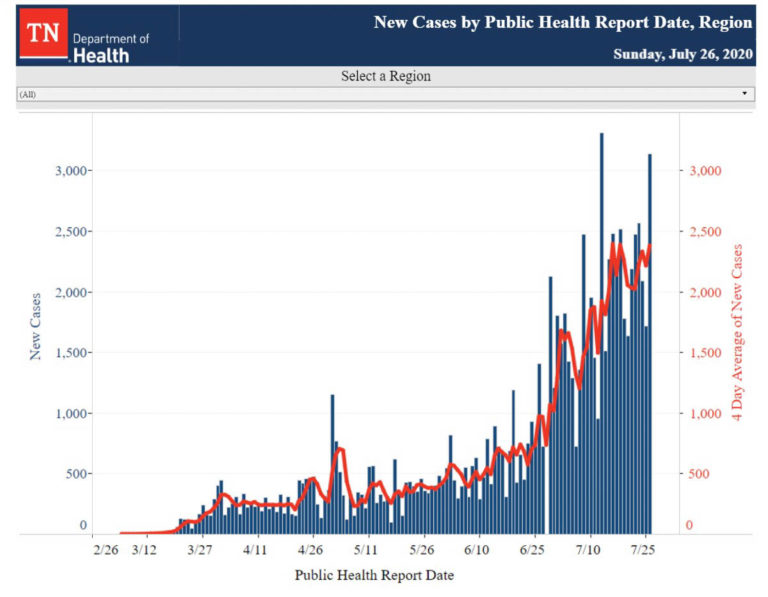 Welcome to the final week of July. Wearing that mask? Keeping that distance? These are the best tools we have at this point to slow the spread and keep our businesses open and operating, even if it is a bit different from what we’d come to expect. Watching around downtown this weekend, I still saw a lot of people out, posing for photos in big groups and generally heading out for a night on the town as if nothing is happening. Something is, indeed, happening here. What it is is pretty clear. Wear the mask, keep the distance. Please.

16,482,150 people have been diagnosed with COVID-19 and 653,303 deaths have been confirmed as a result of the illness. Yesterday, an additional 221,743 cases and 4,308 deaths were reported. Approximately 10.1 million people have recovered and over 5.7 million people are actively ill.

Yesterday’s 221,743 cases was about a thousand fewer than the same day a week earlier. The previous four days had each produced totals which were higher than any other days since the beginning of the pandemic. The fewer cases yesterday produced a drop of 150 cases in the seven-day moving average, which now sits at 252,950.

Reported case numbers are also showing some re-shuffling of the countries at the top, as India continues to rise in both cases and deaths. While 25 different countries around the world reported at least 1,000 new cases yesterday, the top four countries produced about 60% of the world’s newly reported cases: The U.S. (56,130), India (50,525), Brazil (23,467) and South Africa (11,233). India is a major concern due to its limited testing program, massive population and crowded living conditions.

China is concerned because of 61 new cases reported in the country on Sunday, for the biggest daily number since March 6. (This is included because I find it striking that the country (of 1.4 billion people) in which the virus began has about half the number of daily cases as Knoxville, Tennessee. In another example of the striking contrasts: 11 new cases were reported in a Da Nang hospital in Vietnam. As a result of those 11 cases, the first new cases in months, 80,000 tourists are being evacuated from the city.

Governments continue to be hit will the illness around the world. In Zambia, 15 lawmakers have tested positive for the virus. The head of Brazil’s judiciary has the virus. In the U.S., the news is the same. After a large outbreak a couple of weeks ago in the Mississippi legislature, the White House has been hit again. This time, National Security Advisor Robert O’Brien has a confirmed case of the illness. Reportedly, he has had no contact with the president.

The seven-day average of new daily cases sits at 67,612 and dropped about 1300 from the previous day. New cases show some evidence of leveling off nationally even as that seems to be happening in Florida, Arizona and California. Paraphrasing a medical professional I read this weekend, leveling off is good. Unfortunately, we are leveling off at massively high numbers, similar to slowing the increase in the speed of a car at 100 mph on a icy road. We need to slow way, way down. We are still identifying new cases at more than twice the rate we were when we shut the country down.

The 451 deaths yesterday sounds better than the relatively high recent numbers, however, it is higher than the analogous day a week earlier and the death rate continues to creep upwards, with the current seven-day average sitting at 937 additional dead Americans each day. The rate of increase has slowed, offering some hope deaths might soon peak.

It’s worth noting that the simple daily ranking doesn’t cover the entire story, as the states vary widely by population. Mississippi, for example has been in or near the top ten for weeks in new daily cases, but it ranks 35th in population, meaning its per capita rate is likely worse than Florida, California and Texas, which have the three largest state populations in the country. Tennessee has the 16th largest population in the country. Add Illinois to the list of states to watch. It ranked eighth in new cases yesterday, but it seeing sharp increases and is the sixth most populous state in the country.

Baseball teams are finding it difficult to play games amidst the pandemic. The Yankees-Phillies game for tonight was postponed because the Phillies played the Marlins over the weekend and now the Marlins are reporting at least 14 cases of the virus on the team. They, in turn, canceled their game with the Orioles.

A fifth Florida child, nine-years-old, has died of COVID-19. The family insists she had no exposure and did not have an underlying health condition. Phase three testing is set to begin across the United States for Moderna’s potential vaccine. They call having the vaccine available by the end of this year a “stretch goal.” One church in Alabama is reporting more than 40 cases after holding multiple-day in-person services. The Republican version of the latest aid bill is to be unveiled this afternoon. It will reportedly include the same personal payments as last time, but somewhat smaller unemployment benefits.

After crossing 2,500 new cases three times in an eleven day period through last Thursday, new cases in Tennessee dropped on Friday and Saturday before rising to 3,140 new cases yesterday. The number is second only to July 13 on which 3,314 new cases were reported. A total of 93,936 cases have been reported in the state since the beginning of the pandemic, which places Tennessee 13th in raw numbers of the states, and 16th in per capita cases among the states.

Tennessee is the 16th most populous state in the U.S, so, to this point, the numbers are about what one would expect, all other variables being equal. Tennessee, however, currently has a much higher rate of spread than more populous states and its numbers are getting worse comparatively.

922 Tennesseans reached the recovery threshold yesterday and 3 died, bringing the net active caseload up by 2,215 for the day to a current total of 38,239 active cases. 54,730 have recovered and 967 have died. 48 additional people were hospitalized yesterday and a massive 50.4 K tests were reported yesterday to bring the testing total to about 1.4 million. The surge in testing brought the positive test result rate down to 8.5%, still well above the target of 5%.

As of yesterday, there are 1,086 COVID-positive patients in Tennessee hospitals, up just over 30% in the past two weeks. There are 282 additional pending cases among currently hospitalized Tennesseans. Current hospital availability: Beds (21%), ICU Beds (17%), Ventilators (68%). This is very close to the numbers from one week ago (22%,19% and 67%, respectively).

Locally, the rate increase in new cases continues to be high. After having no days prior to July 14 in which more than 100 cases were reported, nine of the last fourteen days and six consecutive days have seen increases over 100 cases in a day. 120 new cases were reported today, bringing the pandemic total in Knox County to 3,205 cases. There are 140 probable cases in the county.

1,332 people have recovered and 1,847 people currently have the illness and are counted as active cases. This is a 41% increase in one week. There are currently 45 Knox County residents hospitalized, which is almost identical to last Monday (44).

Dr. Buchanan chaired today’s meeting and began by expressing gratitude to those reaching out to people in the community whose first language is not English, saying videos were made in five different languages. Testing continues to be available M-W-F 8 am to noon. They are, once again, asking for insurance information. She asked that anyone being tested remain in quarantine until they get results. She said they have identified a new lab and hopes they will speed results. She also noted that you can’t test your way out of quarantine. If you are a close contact to a positive case, you must quarantine for 14 days.