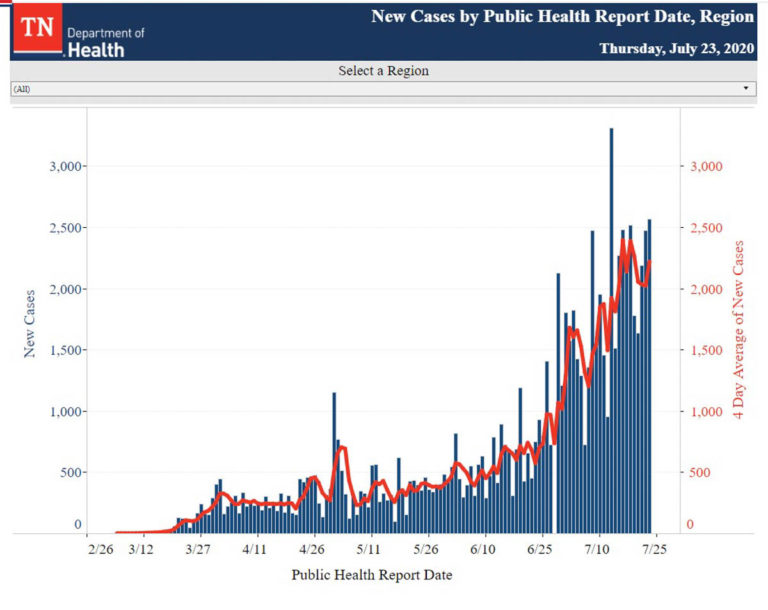 Happy Friday, everyone. I hope you have some plans for the weekend that bring you a happy moment or two. In our home we have a new Bob Dylan album, a four and eleven-year old who are planning a “sleepover” for all of us for tonight (ironically named, it actually means you stay up all night, eat junk food, and watch bad movies). The four-year-old suggested I wouldn’t break as many wine glasses if I simply drank from the bottle, “You could drink from the bottle and get more wine.” It’s shaping up to be quite a weekend at Casa de Urbano.

15,735,321 people across the globe have been diagnosed with COVID-19 and 637,946 people have died of the illness. Yesterday, these numbers grew by 276,278 new cases and 6,318 additional deaths. Approximately 9.6 million people have recovered and 5.5 million people remain actively ill.

The 276,278 new cases was the second largest daily total since the beginning of the pandemic,  only lower than the previous day’s number. After never having crossed 250,000 on a single day, the number was over 275,000 for two consecutive days. The seven-day moving average jumped overnight by nearly 4,000 cases to 241,805. Average daily new cases have roughly doubled in the last six weeks.

Similarly to deaths, yesterday’s new cases were also driven by countries at the top: the U.S. (69,443), Brazil (58,080), India (48,446) and South Africa (13,104). That said, twenty-six different countries reported at least 1,000 new cases yesterday and sixteen reported multiple thousands. Of those countries, many still do not have wide-spread testing programs, meaning the spread is likely much higher than measured. India, for example, has tested about 6.6% the rate of the U.S. and Brazil about 15%.

China is now sending medical supplies to Mexico and has offered a $1 billion loan to the Latin American and Caribbean region for access to vaccines once they are available. Armed militias are enforcing quarantine orders and making their own restrictions in multiple parts of Latin America. South Africa is reporting a wide gap between reported COVID-19 deaths (about 6,000) and “excess” deaths (about 17,000 in a two-month period). Among a range of possible explanations (less treatment for other illnesses), is the likelihood that COVID-19 deaths are being drastically under-counted. The country has announced plans to close schools for a month in an effort to gain control of the epidemic.

The number of new cases yesterday is lower than the corresponding day a week earlier, by about 4,000, contributing to what appears to at least be a stalled level of increase, if not a peak. The seven-day average for new cases is 67,899, within a range of a couple thousand of where it has been for the last week. The high point since the beginning of the pandemic to this point was July 19, at 68,680.

With the 1,116 deaths yesterday, the U.S. has recorded over 1,100 deaths for three consecutive days, the most since the week of May 24. The number of deaths yesterday was about 200 higher than the corresponding day the previous week. The seven-day average of deaths continues to rise, and now sits at 890 deaths per day, a level last seen, roughly, on June 6.

A group of 150 health professionals has requested the U.S. shut down once more to control the virus. Asked in an interview if he, personally, would get on a plane or dine out, Dr. Fauci said he would not, noting that he is in a high risk group because of his age. Dr. Birx said cases are starting to plateau in some of the recently hardest hit states of Texas, Florida, California and Texas. Among other things, President Trump said yesterday that he called off the convention in Florida to “protect the American people,” as he said he has always done.

The state of Tennessee has reported 86,987 cases of COVID-19 since the beginning of the pandemic and 925 deaths attributed to the disease. Yesterday, an additional 2,570 Tennesseans were confirmed with the illness and 37 deaths were reported. 1,913 additional people were counted as recovered. The net additional active cases for the day was 620, making the current total of active cases 34,401.

Yesterday’s 2,570 newly reported cases represents the second-highest total since the beginning of the pandemic. The state has exceeded 2,000 new cases in a day 10 times, with nine of those coming in July and one on June 29. The seven-day moving average (from Worldometers) is now 2,207 new cases per day.

The 37 deaths yesterday represents a high for single-day deaths from the virus in the state. The previous high was 27 set on June 12. Of the six days the state has reported more than 20 deaths, five have come in the month of July. The seven-day moving average for daily deaths is now 18, the highest it has been at any point.

Locally, the Knox County Health Department reported an additional 137 cases today. The number is the second highest daily number since the beginning of the pandemic and follows the largest number of cases (187), reported just yesterday. The daily number has exceeded 100 six times, with each of those coming on or after July 14.

Dr. Buchanan thanked the school system for their hard work on re-opening plan. She pointed out that the two agencies have worked closely for years on infectious diseases. She said the two will continue to work together through the current illness, with advice from the Health Department and decisions made by the school system.

She confirmed the above numbers and reminded the public there is a Board of Health meeting this coming Wednesday. She reiterated that small social gatherings like showers and birthday parties are a major source of spread and noted just because the group is your family and friends, it doesn’t mean that spread won’t happen. It is still critical that you maintain the five core actions even in those situations. If you have a barbecue, everyone should remain distance or wear masks. It is easy to break that distance and let our guard down and  that is what is spreading the virus most often.