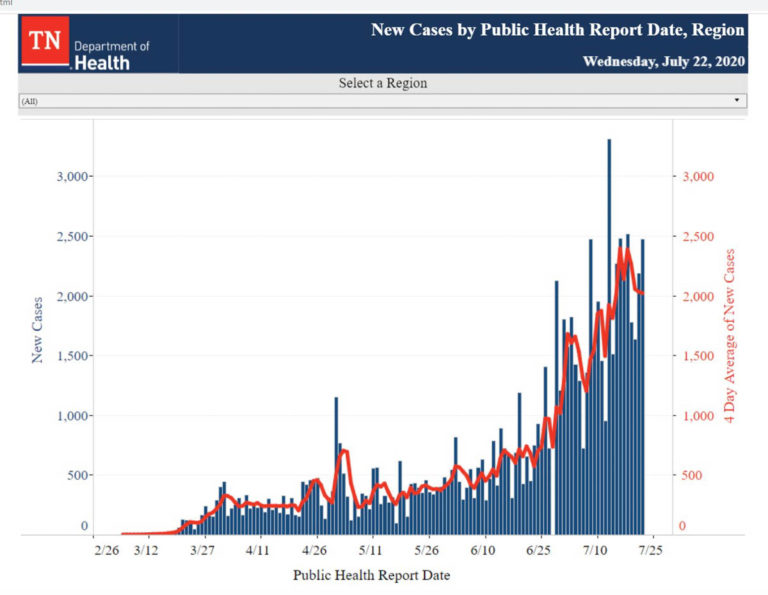 Welcome to the Thursday report. The numbers are discouraging today, but remember numbers shouldn’t dictate our joy. They are a concern. We should adapt our behavior sensibly as a result. The virus is making our life more difficult, no doubt. But  we have to remember and find joy. Today I’ll find mine when I pick up my gold vinyl copy of Bob Dylan’s brand new “Rough and Rowdy Ways” from my friends at Raven Records and Rarities. It’s the small things. Find yours.

Since the beginning of the pandemic, 15,248,360 people have been diagnosed with COVID-19 and 631,279 people have be acknowledged to have died of the illness. Yesterday, 280,154 new cases were reported and an additional 7,128 deaths were confirmed. Approximately 9.4 million people have recovered and about 5.4 million cases remain active.

The number of cases yesterday was the largest since the beginning of the pandemic, and exceeded the previous high, set just last week, by about 12%. The seven-day average continues to exceed any previous time during the pandemic, currently sitting at 237,965 new cases each day, on a pace for adding a million new cases every 4.2 days.

The 7,128 deaths across the world yesterday represents the highest number of deaths in a day since April 21, when most of those deaths would have been in Europe. It is the 8th worst day since the beginning of the pandemic. The seven-day average for daily deaths has now climbed to 5,430, approximately he same as May 4. Deaths continue to be heavily fueled by a few countries. At the top yesterday: Brazil (1,293), the U.S. (1,205), India (1,120) and Mexico (915).

As for cases, the spread continues to be simultaneously widespread and deep. Twenty-six different countries reported at least 1,000 new cases yesterday. That said, a few countries dominate the numbers, including the U.S. (71,967), Brazil (65,339), India (45,599) and South Africa (13,150). Nine of the top 26 are found in Central and South America, five are in the Middle East, four are in Southeast Asia and the others are spread around the world. Spain returned to the top group with just over 1,000 new infections to become the only Western European nation in the top group.

Virus levels considered to cause for great concern varies greatly across the world. Hong Kong (population 7.54 million) is now gearing up over alarm at the rapid rise of cases: 58 on one day this week, which is fewer than the number of cases most days in Knox County (population 470,000). Iraq (population 34 million) is alarmed as their total cases have now crossed 100,000, while the state of Florida (population 21.5 million) has 390,000 cases and state officials there have repeatedly said in recent days they feel Florida is in good shape.

Since the beginning of the pandemic, 4,113,939 Americans have been diagnosed with COVID-19 and 146,378 people have been reported to have died of the illness. Yesterday, 71,967 new cases were added to the total and 1,205 deaths were reported across the country. There are currently just over 2 million active cases in the United States.

The 71,967 new cases for the day is the fifth highest total for any day since the beginning of the pandemic. All five of the highest days have come in last two weeks. The seven-day average for new cases sits at 68,463, almost identical to yesterday and another indication we may have reached a plateau, if not a crest. The average has not moved more than 1,000 in the last seven days.

Deaths, necessarily, trail cases by several weeks. Yesterday’s total of 1,205 deaths marks the largest total of single-day deaths in the U.S. since May 29. The low point for deaths in the U.S. to this point came on July 5, with the numbers slowly rising since. The current seven-day average is 862, about the same level as June 8.

In addition to the six southeastern states in the top seven, other states from the region ranking highly on the list include South Carolina (#9), Mississippi (#11), Alabama (#13) and Virginia (#16). States which have recently joined the top list after a period of success included Ohio and Illinois.

The Republican’s version of the next stimulus bill was announced today, with debate to follow. It will have some of the same components as the first package. Los Angeles officials say COVID-19 is on track to become the second leading cause of death in Los Angles. Miami is fining people for not following the mask mandate and has now doubled the fine. 52 hospitals in Florida have reached full ICU capacity according to the state’s Health Care Administration. Governor DeSantis explained to Fox News why this was not as big a problem as it has been portrayed by the media.

Tennessee has reported 84,417 cases of COVID-19 since the beginning of the pandemic and 888 resulting deaths. Yesterday, an additional 2,473 Tennesseans were diagnosed and 17 died of the illness. An additional 1,896 were moved into the recovered category yesterday, taking that number to 49,748 from the beginning of the pandemic. The number of active cases increased yesterday by 560 to the current active total of 33,781 Tennessee residents.

109 additional Tennesseans were hospitalized with the virus yesterday, bringing the current total of COVID-19 positive patients in Tennessee hospitals to 1,049, down slightly from yesterday. There are 416 pending cases among hospitalized patients. About 25.5 K tests were done yesterday in the state, bringing that total to about 1.26 million. The unfortunate news on the testing front is that our positive test rate has risen to 9.2%.

Locally, the case numbers have become progressively worse. Today the Knox County Health Department reported 187 new cases. It is the largest daily total of new cases since the beginning of the pandemic. The previous high was 147 set six days earlier. We’ve crossed the 100 case threshold four times, all within the last seven days.