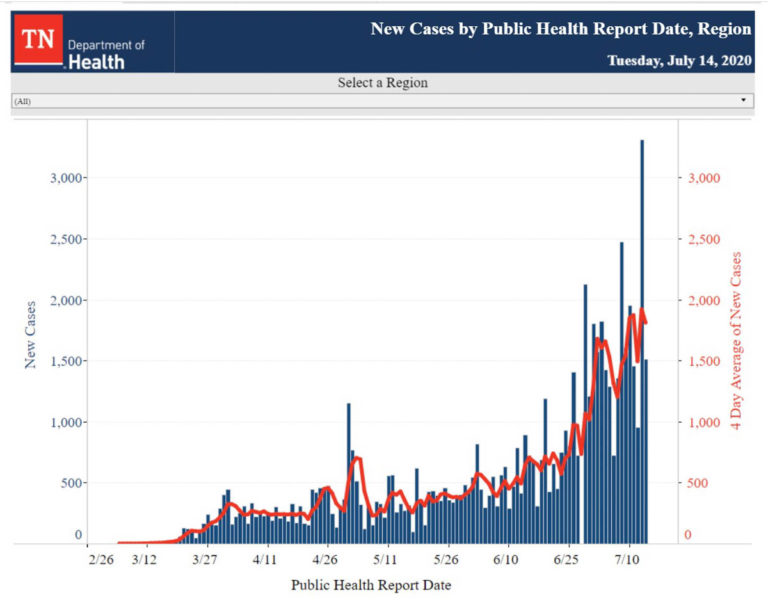 Today promises to be an information-filled day. By the time you read this, the health department will have updated their benchmark information, including the hospitalization information so many have asked about. Tonight, the Board of Health Meets to discuss the situation. At the same time, the School Board meets and their plan for the opening of school is expected.

Buckle up for all that and the reactions that are likely to follow, no matter what they decide. It’s a good moment to recognize that these people will be making decisions between difficult and bad choices and difficult and bad alternatives. Most have good intentions and are doing their best. I’m glad I don’t have to make the decisions.

There are 13,504,987 confirmed and reported cases of COVID-19 worldwide since the beginning of the pandemic. Of this total, roughly 7.9 million have recovered and just over 5 million remain active. An additional 217,981 cases were added yesterday. The average number of daily cases continues to climb worldwide and now sits at 214,750.

582,672 people have died around the world, with their deaths attributed to the disease. Yesterday, an additional 5,414 people died from the illness. The recent average number of daily deaths now sits at 4,949, a slight drop from yesterday’s seven-day rolling average of 4,965. It’s the first time the number has declined in over a week and a hopeful sign that the increase will pause. The current numbers are roughly equivalent to those in mid-May, but much better than those in early-to-mid April.

The W.H.O. is expressing concern regarding declines in vaccinations across the world, which is intertwined with disruptions in supply chains due to COVID-19. In many countries, other public health issues pose potentially as much or more threat than COVID-19. The Philippine government is deploying police to ensure quarantines are kept as the country struggles with spread of the virus. In Australia, a birthday party was shut down and fines of $18,000 imposed for illegal gatherings during the pandemic. They traced a KFC order to find the party.

The total number of confirmed and reported cases of COVID-19 in the United States as reached 3,559,713. The U.S. leads the world in total cases by a large margin. (Brazil is second with just over 1.9 million.) In countries with 10,000,000 or more in population, the U.S. ranks only behind Chile for the highest case rate per capita. Yesterday, 65,594 Americans were diagnosed with the illness, bringing the active case number to 1,822,529. Cases continue a steady rise, with the seven-day average now 63,693, about a 1,400 increase from the day before.

937 Americans died yesterday, to bring that total to 139,143 deaths since the beginning of the pandemic. The number reflects a pause in the steady increases in seven-day averages we’ve seen recently, with that number dropping from 752 to 743. Whether it this represents a single-day anomaly or something more will become clear as we move forward. Current rates are about the same as mid-June after dropping, then rising.

The Trump administration has directed hospitals to send data to a central database in Washington, not to the CDC. Peter Navarro, an assistant to the president who has no medical background, has penned an opinion piece in USA today undermining Dr. Fauci’s credibility, captioned “Anthony Fauci Has Been Wrong About Everything I Have Interacted With Him On.” The White House said that was his independent opinion, though it did not contradict anything in the piece.

Moderna’s coronavirus vaccine is showing strong early promise. Dr. Redfield, Director of the CDC said yesterday, we could “drive this epidemic into the ground,” in 4 to 6 weeks if we all simply wore masks. A recent study shows Arizona citizens are the least likely in any state to wear a mask. The Institute for Health Metrics and Evaluation has released their latest projection, estimating just over 223,000 Americans will die from COVID-19 by November 1. They also estimate that number could be around 183,000 if masks were universally accepted across the country.

Yesterday, the state of Tennessee reported 1,514 additional cases of COVID-19, to bring the pandemic total to 66,788. 1,276 people were considered recovered as of yesterday and 18 Tennesseans died. The net of the three numbers increases our active cases by 220 to 27,749. The four-day moving average for cases is 1,811.

Statewide, 905 hospitalized patients are positive for COVID-19 and 377 are pending, based on the latest information provided by the state. Statewide numbers regarding hospital capacity are each slightly tighter than they were yesterday, with 19% of hospital beds available, 17% of ICU beds available and 68% of ventilators available.

Locally, the Knox County Health Department is reporting 68 new cases of COVID-19 confirmed overnight. The total for the county from the beginning of the pandemic now sits at 1,814. 893 people have recovered and a total of 15 have died, including an additional death overnight of a 56-year-old male.

Given the most recent numbers, of the five benchmarks followed, three will now have red lights, one yellow and one green. Available hospital capacity remains about the same as last week, with 21.7% of beds available, 8.8% of ICU beds available and 55.4% of ventilators available.

Charity Menefee chaired today’s meeting and expressed sympathy for those who have lost a family member. She also reminded people that  a negative test is only a snapshot in time. She confirmed the above numbers.

Benchmarks were updated today and she began by noting that the two-week rolling average and statistical deviations from that is the focus for determining whether the lights are red, yellow or green. She said the case numbers have been concerning and continue to be so, leaving that traffic light red.

Regarding the testing benchmark which shows the number of tests and return rate. She said there is a much greater lag time between testing and reporting. There is an increase in test demand and concerns about supplies. She said this is a state and national issue. Due to the backlog leading to as much as 10 days delay in getting results. The benchmark is now red.

Regarding the public health capability, she said all cases and contacts have been contacted within 24 hours of receiving the labs. Contact tracing is being expanded. This light remains green.

Regarding the hospital capacity benchmark, capacity continues to be adequate, but there is concern regarding rising census numbers across the region. There were days of statistically significant increases. The determination for color is made in conjunction with the hospitals. The traffic light is yellow.

The benchmark relating to deaths continues to be a concern. Deaths, while small in number, have tripled in the last three weeks. That traffic light will remain red.

She pointed out that while our numbers may not look bad compared to other jurisdictions, the rate of increase is high and concerning. Cases lead to hospitalizations and hospitalizations lead to deaths. She pleaded with everyone to follow guidance.