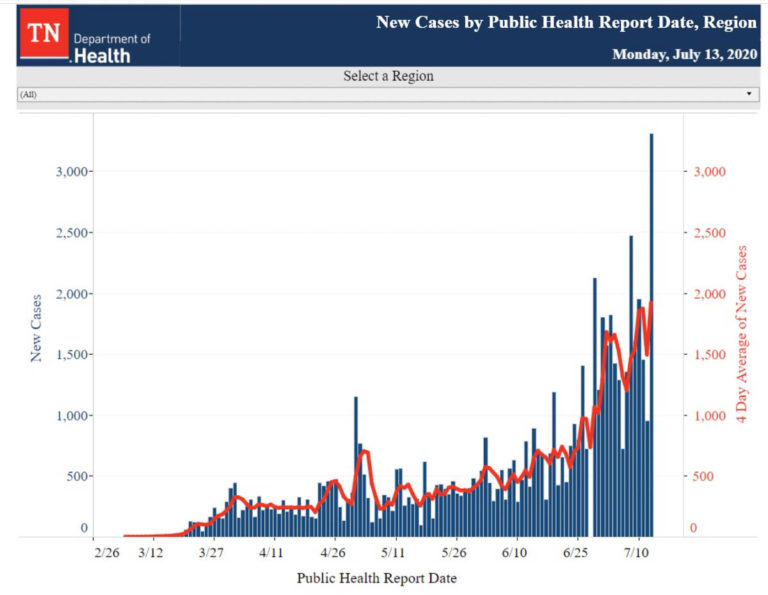 As we move through our week, there’s a lot going on. Big meetings loom tomorrow, with the School Board and the Board of Health each facing difficult decisions that will potentially impact us all. On a personal level, many people are faced with difficult decisions as unemployment begins to run out, businesses appear safe to re-open, then maybe not, then maybe so, again. For many of us, our definition of safe behaviors shifts, and then shifts again. Be thoughtful as you make your decisions, be graceful to those who also struggle, but reach different conclusions.

Since the beginning of the pandemic, 13,276,123 people around the world have been diagnosed with COVID-19 and 576,524 have died. 195,783 cases were added yesterday, and there are currently 4,952,440 active cases world-wide. The average number of daily cases continues to increase, as it has since mid-May. The current seven-day average for daily new cases is 213,351.

3,729 deaths were reported yesterday, as cases continue a slow rise after a previous period of declines. The current increase is very gradual, with a seven-day average currently sitting at 4,966 deaths each day, up from 4,944, yesterday. The average has risen for eleven consecutive days.

U.K. Prime Minister Boris Johnson has reversed course, requiring masks in shops and markets. France is expressing its appreciation for its health care workers in a tangible way, by giving them $9 Billion in raises. Concern’s are being discussed that wealthy countries will purchase and hoard vaccines, leaving poor countries vulnerable far longer than the rest of the world. Russia has announced completion of human trials on a new vaccine, the first such announcement among the many attempting to develop a vaccine in countries all over the world.

Since the beginning of the pandemic, 3,481,689 Americans have been diagnosed with COVID-19. Yesterday, 65,488 new cases were added to the total. The seven-day average continues to climb and now sits at a daily average of 62,243. As of yesterday, that average was 60,114 and it has recently been raising by about 2,000 per day.

Since the beginning of the pandemic, 138,291 Americans have died of the illness. Yesterday, an additional 465 deaths were reported. After a long period of declines, deaths are increasing, once more, in the United States. The seven-day moving average now sits at 753 deaths each day. The number has increased for eight consecutive days.

California, Texas and Florida continue to struggle with soaring case numbers. Yesterday, the three states contributed 18% of the world’s totals of new cases. Gavin Newsom in California is closing indoor operations for restaurants, wineries and movie theaters. Bars will be completely closed. In the hardest hit areas of the state, the rules are even more strict. Los Angeles and San Diego schools, the two largest school systems in the country, announced yesterday there would be no in-person instruction this fall for students.

In Texas, bars have been closed and masks are required in many places and an advisor to the governor said another “economic lockdown” is a possibility. In Florida, deaths are at their highest point since the beginning of the pandemic. On Sunday, the state reported the highest single-day total of any state since the beginning of the pandemic, with 15,300 cases and followed that on Monday with 12,600 additional cases.

For many local businesses, the back and forth is simply too much and they are making the decision to close permanently. That toll is expected to grow in the coming months. Parties and gatherings continue to be a major source of spread, like the one in Saline, Michigan from which 43 new cases emerged. Some parties are reportedly planned around a person who has tested positive and are called “COVID parties.” A Texas man died after claiming to attend such a party. Officials in Missouri have linked 5 cases to a 4th of July party and they are expecting more, as the attendance was as high as 400 people.

The state of Tennessee reported 3,314 new cases of COVID-19 yesterday. As you can see on the chart above, this is the worst day for new cases, by far, since the beginning of the pandemic. The previous record of 2,472 was set just last Wednesday and was a shocking number at the time. This number surpasses that one by 34%. The four-day rolling average is now at 1,921 new cases per day, the highest it has been since the beginning of the pandemic.

The state reported that 1,141 additional people were counted as recovered as of yesterday and eight additional people died. The net increase in active cases in the state for the day was 2,165, to bring that total to 27,599. The number has nearly doubled in the last two weeks from 14,743 on June 30. Deaths in Tennessee since the beginning of the pandemic now total 749.

34 additional COVID-19 patients were hospitalized yesterday, bringing the total to 864 in Tennessee hospitals who are positive for COVID-19. An additional 358 are pending. Available hospital beds (21%), ICU beds (21%) and Ventilators (69%) remain adequate at this time.

The state reported a massive surge of 35,926 tests yesterday, bringing the total tests given to over 1,000,000. The alarming news relating to spread is that the percentage of positive tests being returned continues to rise and now sits at 8.8%, which is well above acceptable levels for controlling spread.

Locally, the news is also concerning and it starts with numbers of cases. Knox County reported 118 new cases today. The previous high, reached twice, was 93 on July 4 and July 6. The surge comes after several days of lower numbers than we’d experienced in the days just prior which, based on Dr. Buchanan’s comments yesterday, likely means that the previous day’s numbers were depressed by lab back-logs on testing. Lab capacity continues to be a concern.

Knox County now has 839 active cases of COVID-19, up from 736 yesterday. Two weeks ago this number was 234, meaning we have nearly quadrupled our active cases in just two weeks. There are 40 Knox County residents with the illness in the hospital. This number has nearly tripled in the last two weeks from 14. There are 69 probable cases.