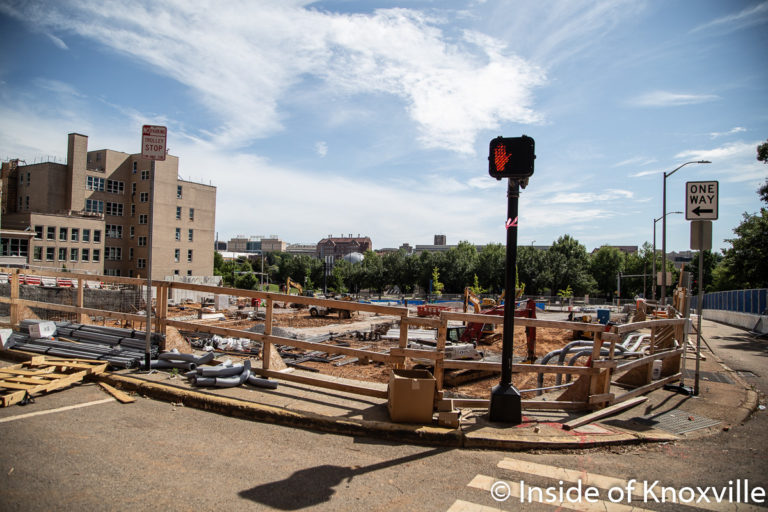 Time seems to be moving more quickly over the last few months than I might have expected. One month quickly blends into the next, or so it seems. I realized I hadn’t posted any photographs of the major downtown construction projects since February. In those five months, good progress has been made on several projects. I also noticed one that slipped by me.

You’ll find the February article covering these projects, here. You might want to look back to see the work that has been accomplished over those months. If you haven’t had the chance to walk or drive by and take note, you might be surprised.

The first shown here, is the Stockyard Lofts project on Willow Avenue. In the last article, the photographs showed large holes filled with copious amounts of water. In case you’ve forgotten, we had massive amounts of rain in January and February. At that point, we thought if the sun would simply come out, life would be good and all would be well. Oops.

The photographs aren’t great, as I couldn’t really get a good vantage point, but I think you can readily see it is no longer a lake. Note that one of the photos is from May, so you can see that in the last couple of months the project has made significant progress. The foundation of the building appears to be in place and the structure for the garage that will be under the building is taking shape. The crane on the site is one of the two currently visible on the Knoxville skyline from long distances.

The Jackson Avenue Ramps are rapidly taking shape. Set to be finished later this year, what seemed like disastrous timing for the businesses in the Old City and along Jackson Avenue, it’s turned out to be a perfect time for the road to be closed to through traffic, as the pandemic has greatly hampered business in any case. The project looks to be on schedule.

Unless I get a look inside, which I’ll try to do sometime soon, this will be the last look at City House Town Homes as they appear to be finished on the outside. At least one resident lives in the new homes which have several unique features for downtown, from their size to their multiple outdoor spaces and private garages.

UT Conference Center appears to be getting a refresh. The landscaping along Locust Street has been removed and there appear to be some changes to the entrances. I somehow missed this project along the way. Does anyone have an idea what’s happening here?

Across the street on the Old Supreme Court site, construction is plowing ahead beneath the shadow of the other large crane currently in downtown. Work is still being done on the foundation, but clear progress has been made since the previous article. Plans for the Supreme Court building itself are coming more into focus and I’ll likely have more on that sometime soon.