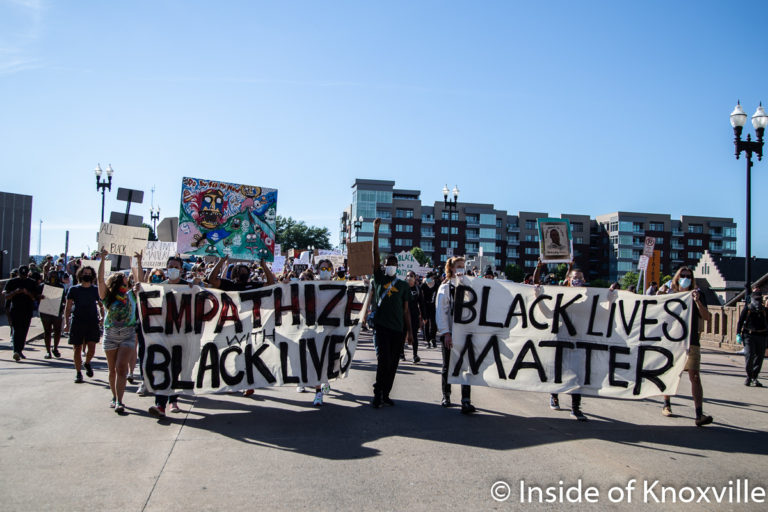 As they have in other parts of the country, protests against police brutality against black citizens, particularly black men have continued in Knoxville. Yesterday afternoon a group of around 300 people met in Krutch Park, marched to the Gay Street viaduct, paused there for a few minutes and walked back down Gay Street to the park and dispersed. For those concerned about the spread of the virus: They wore masks. Overwhelmingly.

There was no violence during the march (and I’m hoping as I write this there is none overnight) and leaders repeatedly reminded the marchers that this was a non-violent protest. Police were nearby and seemed ready for the march down Gay Street even though they had not blocked traffic there. They did block Summit at the intersection of Gay to allow the group to pass.

Many of the signs referenced George Floyd, whose death in Minneapolis ignited the protests nationwide, some with his last words, “I can’t breathe.” The video has caused outrage across the country as the footage is so difficult to watch. We only know this happened because it was filmed, of course, which raises the question of how many times does this happen when it isn’t recorded.

While a number of signs in the march referenced Black Lives Matter, that organization did not participate in the march. Like the action last Saturday, word of it circulated through the day, but for many of us, it was difficult to discern who planned it. Given the recent and ongoing violence, this could matter. I was told by someone at the march that it was organized through a U.T. group, but I’m still not sure.

As with a number of other marches nationwide, this one included people of all races. It closely reflected Knoxville’s racial make up in that an overwhelming majority of the participants were white. Some carried signs acknowledging that implicitly, calling for empathy for black Americans.

As much as the police maintained a presence, they were almost invisible. There was no riot gear or armored vehicles in sight. There were no confrontations. The police seemed content to allow the march to sort itself out without interference. Scheduled to begin at 5:00 pm, the whole thing was over around 6:00 pm and the crowd was encouraged to go home.

Historic, systemic and ongoing racism and targeting of black men, whether being gunned down in Georgia while jogging or killed beneath a knee of a policeman in Minnesota has to be confronted, acknowledged and repudiated if our country is ever going to heal. This may be a necessary step. In this moment, Knoxville did it well. As I write this I hear the police helicopters over downtown and hope it holds.