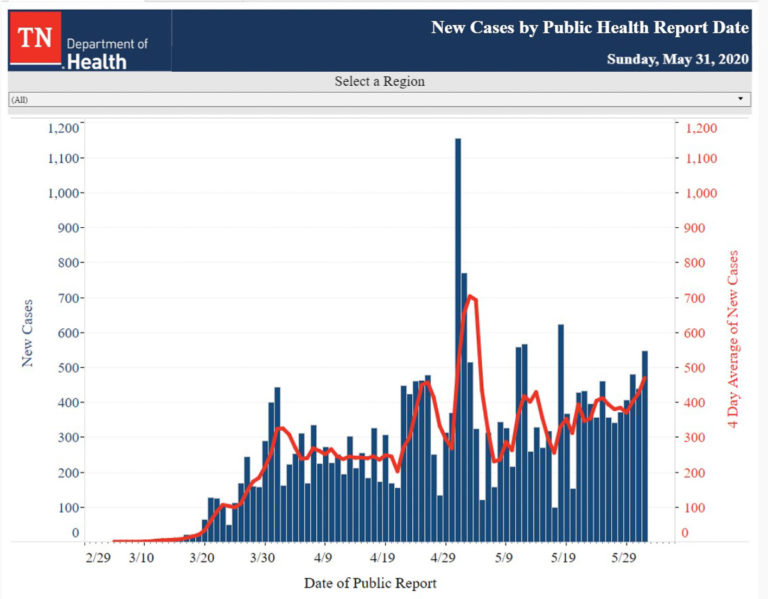 There is no health department mid-day briefing today, as the Knox County Health Department has determined their time is better utilized in other efforts. Their stated intent is to hold a news conference on Monday, Wednesday and Friday going forward. The timing is unfortunate in that today Knox County saw its highest jump in cases since the beginning of the pandemic.

As of mid-day there are 6,408,704 confirmed and acknowledged cases of COVID-19 and 378,301 worldwide reported deaths. Yesterday’s numbers reflected a total of 103,946 new cases and 3,053 deaths. While the number of daily cases fell yesterday, the trend in case numbers continues upward as shown in the graph above. As shown in the graph below, the number of daily reported deaths continues to decline.

Yesterday, there were sixteen countries across the world reporting more than 1,000 new cases. The U.S., once more, lead the world by a wide margin with over 22,000 new cases, while Brazil fell back to 14,000. Russia, India, Peru, Chile, Mexico, Iran, Pakistan and Bangladesh had the highest totals. Of these, Chile and Bangladesh appeared to have the highest rates of increases.

Iran, while not showing as high a rate of increase, had its worst single-day numerical increase in two months. Also at that same link comes news that 133 different vaccines are being examined worldwide and that a new swath of European countries are loosening restrictions starting this week. In other international news, Spain recorded no deaths yesterday, Bangladesh identified its first case in a refuge camp, and cafes are opening (with some restrictions) in Paris.

While much of our national attention is taken with the protests over police brutality, the virus continues to spread. 22,153 cases were confirmed yesterday, along with 730 additional deaths. Our mid-day national totals show 1,862,235 cases and 107,061 deaths. While new cases showed a decline for weeks after peaking in early April, the decline appears to have at least slowed, if not plateaued. Deaths continue to decline, with five of the last nine days falling under 1,000.

Looking at individual state trends, Massachusetts, which had seemed to vastly improve control of the virus, saw a surge yesterday that propelled it to the biggest increase in the country, with 3,840 new cases in a single day. If it were a country, it would have ranked seventh in the world yesterday for biggest increases worldwide. California was second with 2,535 new cases and Texas rounded out the top three, the only states with more than 1,000 new cases, with 1,130.

As has been the case in recent days, southern states continue to rise in comparison to the new daily cases of the other states. In addition to Texas with the third worst increase, the following states joined in the top twenty worst daily increases: Georgia (#7), North Carolina (#8), Virginia (#9), Florida (#10), Tennessee (#12), Alabama (#14), Louisiana (#17) and Kentucky (#20).

Today’s state and local news reflects, perhaps, the biggest concern since the beginning of the pandemic. As noted above, Tennessee was number twelve yesterday for most new daily cases in the U.S. This didn’t happen in a vacuum, there wasn’t a sudden surge and the result isn’t because of a new outbreak at a prison or nursing home. The numbers, as shown on the graph above, show a clear and steady trend since mid-April, escalating in early May and continuing upward.

548 new cases were reported yesterday in the state of Tennessee, bringing the in-state total since the beginning of the pandemic to 23,554. Yesterday’s total of new cases is the state’s sixth worst day since the beginning of the pandemic and the current four-day moving average is higher, at 469, than it has been since May 4. 264 cases were pronounced recovered, meaning our active cases increased by almost 300 across the state. 3 more people died yesterday and 17 were hospitalized. The total deaths in the state of Tennessee now stands at 367.

There was a surge in single-day testing yesterday, with 12,516 tests given, to bring the total to 448,493. Of major concern is the fact that increased testing is not currently leading to a lower percentage of positive results, as would be expected. Most health experts feel that a positivity rate below 5% indicates the testing program is finding most cases. Ours rate of positive results has steadily increased from a rate of 3.6% around early/mid May to its current rate of 5.2%.

Locally, the numbers are also alarming. The Knox County Health Department reports 23 new cases today. This is the largest single-day increase since the beginning of the pandemic and comes on the heels of a sting of days with higher numbers. It represents more than a 5% increase in our total numbers overnight and brings that total to 433. More than 25% of Knox County’s total cases have come since the beginning of last week.

The number of active cases has now risen to 93 Knox County residents, likely the highest it has been since the pandemic started. One person was hospitalized yesterday and no additional deaths were reported. Probable cases are now listed at eight.