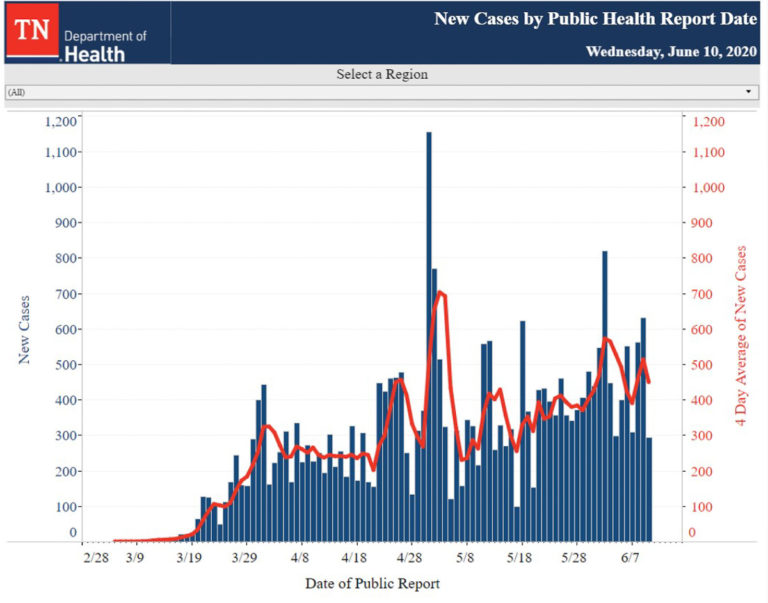 It’s almost the weekend. It’s almost mid-June. It’s almost half-way to who-knows-what? The passage of time is altered in ways that we could never have imagined. Past markers like weeks and weekends, like days to the next concert or trip have been replaced with days until the next curbside grocery pickup or days until the Amazon package arrives. Hours until Knox County/Tennessee releases their daily numbers. How are you marking time? Hours until this report arrives each day? 🙂

Numerically, the news on the international front isn’t good. There are now 7,501,329 cases of COVID-19 confirmed and reported across the globe. 135,578 new cases were reported yesterday, making the largest single day increase in cases since the beginning of the pandemic. No doubt, some of this is due to increased testing, but it confirms the virus continues to be present in large numbers around the world. There are currently almost 3.3 million active cases in the world.

There have been 419,986 deaths across the world attributed to COVID-19. The general trend of declines in deaths each day has been slowed in recent weeks as the level of daily deaths has risen slightly. Yesterday’s death toll of 5,163 marks the first time over the 5,000 mark this week, but each of the last three weeks have had one day over 5,000, so that could be it for this week as the data continues to be on a roughly weekly cycle of reporting.

I realize readers may be tiring of hearing about Brazil, but it’s hard to overstate the disaster unfolding there as their strong-man president continues to downplay the impact of the virus. The country has reported about 3/4 of a million cases and nearly 40,000 deaths, second in the world behind the U.S. in cases and third behind the U.S. and the U.K. in deaths. Yesterday’s staggering numbers lead the world, with 33,100 new cases and 1,300 deaths. Brazil alone accounted for roughly 1/4 of all new cases and deaths in the world for Wednesday.

But Brazil isn’t alone. Twenty countries added at least 1,000 new cases yesterday, the largest number of countries since I started tracking that statistic. The U.S. was second on the list with 20,852 new cases, India third with 12,375. These three top countries accounted for about half the world’s new cases for the day. India is necessarily under-reporting (as is Brazil), due to extremely limited testing.

The countries which seem to have the fastest growing epidemics, in addition to Brazil and India, include Pakistan, Bangladesh, South Africa, Colombia, Iraq and Argentina. There are emerging concerns in Africa and the Balkans. A study of satellite images suggests China may have first experienced COVID-19 infections as early as last summer. The Chinese government’s lack of honesty in numerous ways has hampered epidemiologist’s attempts to assemble accurate information about the virus.

There are currently 2,071,495 cases of COVID-19 reported in the U.S. since the beginning of the pandemic. 20,852 cases were reported yesterday, marking the first day in the last four that the number went above the 20,000 mark. 115,130 deaths have been attributed to the virus, with an additional 982 reported yesterday.

As a national average, new cases of COVID-19 declined slowly from late April until late May before roughly leveling off. That does not tell the complete story, however, as nearly half the states are reporting increasing rates of spread, even as the populous, early-hit states see declines.

Current projections are calling for a lower death rate through the summer, with around 200,000 deaths by September. At that point deaths and infections are likely to increase and the amount of increase will depend on how we respond. If the projection is close to accurate, it raises the stakes on decisions being made now regarding fall classes for schools and colleges.

Sixteen were hospitalized and 7,438 were tested, bringing the total tested to close to 530,000. The rate of positive tests continue to be just above five percent, missing the target slightly. When the above graph is averaged out, weekly testing in Tennessee has roughly leveled off for the last month.

In other good news, the Knox County Health Department reported only six new cases, a reprieve from the recent high daily numbers. It brings the total since the beginning of the pandemic to 525 cases in the county. The number of most concern at this time is that 120 of those cases are currently active. Four Knox County residents are currently hospitalized with no additional deaths to five long-reported deaths. There are 12 probable cases. Since the beginning of the pandemic, about 10% of those diagnosed with COVID-19 in Knox County have required hospitalization.