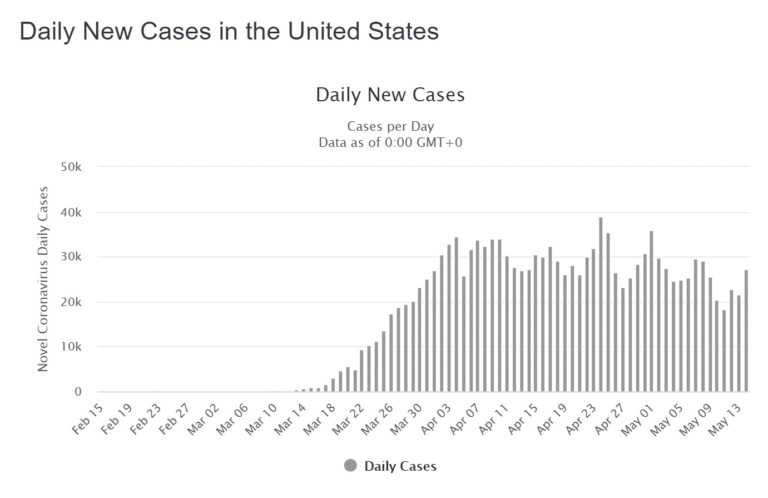 It’s Friday! Does that still mean something? Or did you think yesterday was Friday? For me, the weekend is a brief break from writing, so it does have some distinction. That gives me a little leeway to watch a movie or two, which is a nice break. I’m not a big movie buff, so I don’t have much in the way of recommendations, but we’ve recently enjoyed “Don’t Look Back,” the Dylan documentary by Martin Scorsese. Also, thanks to Leslie Jordan who gives us a laugh everyday on Instagram, we’ve gone back and re-watched “Sordid Lives,” and have plans tonight to watch “A Very Sordid Wedding,” the sequel of sorts. That’s all I’ve got. I hope your weekend feels special in some way.

Just as the days blend, the endless recitation of statistics tends to become a buzz in our ears after a while. The numbers for this pandemic will eventually be measured in altered mortality rates, as opposed to the reports issued by various countries. In general, we know about how many people die each year in each country and have pretty good projections of how many will die next year.

If, as appears to be the case for 2020, that number changes appreciably, we can pretty much assume the increase is due to the identifiable variable which changed, whether that be a war or, as in this case a pandemic. There is simply no way we’ll ever appreciate the totals by counting deaths among those who were diagnosed with COVID-19 since many very populous countries do not have the capacity to test. Other countries will likely not tell the truth, underestimating their totals for political reasons. Most of those countries do have systems for counting those who died of all causes.

The numbers for today include a total of 4,569,106 cases and 304,798 deaths. Yesterday (all according to Worldometers), there were 96,334 newly confirmed cases and 5,317 deaths. Yesterday marked the third consecutive daily increase and the total of new cases for that day ranks as the forth highest daily increase since the pandemic began. Worldwide deaths have been remarkably even for three consecutive days and remain in the lower-middle of daily deaths for the last six-to-seven weeks.

Russia, which continues one of the world’s worst current outbreaks, reported under 10,000 new cases yesterday for the first time in nearly two weeks. Hardly a cause for celebration, the number was 9,974 new cases and they have gone back over 10,000 today. The reports of deaths in Russia continue to be beyond believable. With over a quarter million confirmed cases, they report a total of 2,305 deaths, or about 10% the death rate of countries similarly hit. Here’s a look at what’s happening there and how their system of top-down orders seems to be hobbling their response.

Sweden continues to be much discussed. It’s interesting because in previous times, Sweden was generally lauded by liberals in this country as an example of a well-run progressive country. It was generally reviled by conservatives for its high taxes. Both sides tended to call the country socialist, which isn’t completely true. Now the roles have reversed, with conservatives holding up Sweden as an example of a more logical approach to this pandemic, in which they did not close their country.

Economically, have they paid a lighter price? Projections have their economy shrinking in the range of 7.5% for the year, which is in line with other European countries. Even if you feel their approach is best, there are questions as to whether it will work elsewhere. Their population is less dense and they have a much higher rate of single-person homes, for example. Here’s a look at the good, the bad and the ugly.

Across the rest of the world, yesterday’s numbers indicated continuing struggles in the same countries, with a few more starting to look concerning. Again, these numbers are only as good as the testing and India and Brazil, for example, have very very minimal testing programs. Countries (beyond the U.S. and Russia) continuing to struggle, include Brazil, Peru, India, the U.K., Chile, Saudi Arabia, Mexico, Qatar, Bangladesh and others.

We continue the race to reopen and are well along our way. Joining the race (see what I did there?) to reopen is NASCAR which has announced an abbreviated May schedule, bringing live sports back to television. Likewise, Major League Baseball is edging toward resuming, though the details have yet to be worked through. Both sports would resume in the absence of fans, as has South Korean baseball. Sports may seem trivial to some, but it is a major economic machine and, for millions, the return would be a welcome resumption of some sense of normalcy.

The news across the country is ambiguous, at best. Just over half the states are seeing a reduction in new cases, which is encouraging. A number of those states were the earliest hit, such as New York. A number of states continue to struggle, with ten states reporting more than 1,000 new cases yesterday. From most new cases to least, that top ten is currently Illinois, New York, California, Massachusetts, Texas, Michigan, New Jersey, Maryland, Virginia and Pennsylvania. Five southern states fall into the second ten on the list: Louisiana, Florida, North Carolina, Georgia and Alabama.

Total cases now reported in the United States is 1,465,047, with 87,299 deaths. Yesterday’s totals of 27,246 newly diagnosed cases and 1,715 deaths puts the numbers in the middle of the range where they have remained for the last month-and-a-half. These cases and deaths have occurred in a span of about two months, but the number of deaths would already rank seventh in a normal year for most deaths by a single cause in the U.S. The number just surpassed that of annual deaths from diabetes.

The State of Tennessee is reporting 16,699 cases of COVID-19 and 287 deaths from the illness since the beginning of the pandemic. Yesterday’s increase was 329 cases and 14 deaths. As a comparison, a week ago the state reported 158 cases overnight. While lower than a couple of days earlier this week, our numbers are growing.

As I mentioned yesterday, this is difficult to put into context because of the absence of a state chart similar to the national and world charts above. Does anyone know where the daily numbers for the state have been kept since the beginning?

The state reports that 257 have recovered since yesterday, continuing our trend of more new cases than recoveries. 47 people with COVID-19 were hospitalized yesterday. The state has administered 302,317 tests, including 9,400 since yesterday.

Locally, the Knox County Health Department is reporting zero new cases or deaths. This follows yesterday’s report of -2 new cases. Have we arrested the spread even as we open up? There are 67 active cases and no hospitalizations. While I would caution against any group dance-party celebrations this weekend, these are delightful numbers. Not a trend, but encouraging.

Charity Menefee led today’s briefing thanking the team at the KCHD, the city and the county. She confirmed the above numbers.

She discussed how we are doing as we are half-way through phase one. She said signs are good, but it’s a bit early. She talked about the KCHD’s rolling averages as standards for evaluating achieving the benchmarks set to determine progress of opening going forward. You can find the benchmarks here along with the attendant traffic lights and stats.