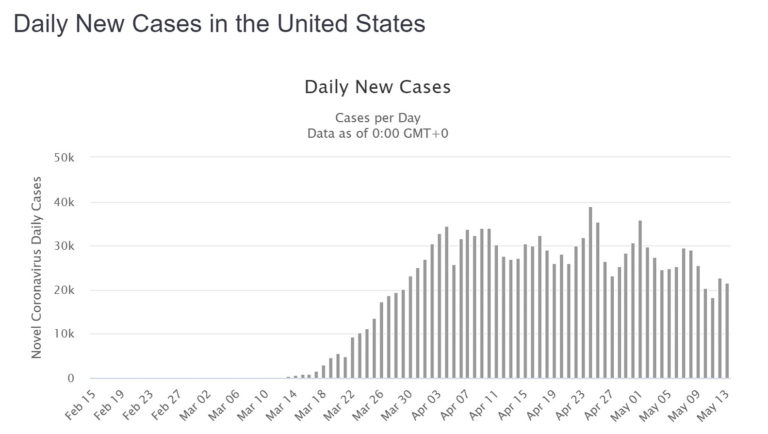 Here’s hoping you are all navigating our current world in healthy and happy ways. Traffic is clearly up from the area Interstates to the downtown streets. Far more pedestrians are moving about in the downtown area as more stores open. Mast General Store, one of downtown’s largest retail establishments will open next week. Please be as safe as possible as you start to stir about.

There are now 4,467,842 confirmed cases of COVID-19 world-wide. There are 299,553 confirmed deaths. New cases reported yesterday totaled 88,220, while additional deaths for the day totaled 5,314. The total new cases is slightly higher than yesterday and the total deaths is basically the same (6 fewer). Both numbers fall into the range of numbers for daily additional cases and deaths where the world has tracked for the last six weeks. As some areas have subsides in new cases and deaths, others have emerged.

Russia logged its eleventh consecutive day reporting over 10,000 new daily infections. The country is rapidly moving toward being the second hardest hit country, as measured by total cases, in the world, behind the United States. Of interest is the continuing lag in reports of deaths or critically ill patients in the country. Either Russia is not fully reporting its deaths from COVID-19 or they have a much lower mortality rate than the rest of the world. For a comparison, they are reporting about 200,000 active cases and claim that only 2,300 are critical, while Brazil has about half that many active cases and lists almost four times as many as critical.

Yesterday’s numbers extended the trends we’ve noted in previous days regarding other countries with high current infection rates. Brazil surpassed Russia for new daily cases yesterday with 11,555 new cases reported. The UK continues to add over 3,000 per day as they have since the end of March, but there is some movement lower, there. India, Peru, Saudi Arabia, Mexico, Pakistan, Chile and Qatar continue to have high rates of spread.

As I’ve noted before, the numbers are only as good as the testing. India has now tested 1,344 citizens per million, compared, for example, to the U.S. where we’ve tested at a rate about 25 times higher. There is really no good way to know what the true number is in a country the size of India with that low level of testing.

As of mid-day, 1,434,929 cases of COVID-19 and 85,402 related deaths have been confirmed. An additional 21,712 cases were confirmed yesterday, as well as 1,772 deaths in that 24 hour period. While both are still world-leading daily and cumulative numbers, and they fall within a general range of numbers for the last six weeks, a wide-view look at each chart does yield some encouragement. The moving average in each seems to be moving somewhat lower.

The question for the U.S. in the short-term is whether new cases and deaths are receding because we are gaining control of spread or whether the numbers are temporarily dropping because they are dropping so massively in our most populated areas. In other words, the focus now is shifting to less populated areas and the rate of spread there will dictate what happens next across the country.

Debate across the country has shifted from whether to remain in shutdown to how quickly should we move out of it. It has moved from needing or wanting health guidelines to debates about whether anyone can make Americans follow guidelines. In short, the focus of the conversation has moved from health to politics.

The division is seen on multiple fronts, but one prominent divide is those who trust Dr. Fauci to give sound guidance and those who trust President Trump, as each are increasingly in conflict, most recently about the likelihood of schools opening in the fall. Fauci told the Senate earlier this week that a vaccine would not be available by this fall and sounded caution about opening them up too soon. President Trump said that answer was “unacceptable.”

In related news, a CBS poll found that 62% of Americans trust Dr. Fauci, while 38% trust the President to lead us in this crisis. White House spokesperson Kayleigh McEnany said the results of the poll are not true. In both the case of President Trump saying Dr. Fauci’s answer is “unacceptable,” and Ms. McEnany’s assertion that the poll isn’t accurate, neither explained why the believe differently. Polls have also consistently shown that Republicans trust the president at a very high rate.

Of increasing dispute is the number of cases and, particularly deaths. While Dr. Fauci and others have stated they feel certain the deaths are under-counted for various reasons, increasing voices on the right are questioning whether the numbers are too high. President Trump and others at the White House are reportedly pressuring the CDC to change how the numbers are kept in ways that would make them lower. This comes as the president has disagreed with the CDC over its plan for opening up the country, resulting in no plan being produced as a national guide.

As the states navigate their own re-openings, the same conflicts are playing out. The state vs. city political divide is evidenced, for example in Texas, where state Attorney General Paxton has ordered Austin, Dallas and San Antonio to loosen their restrictions or face possible legal action. In Wisconsin, state Republicans sued to force the state to reopen more quickly, saying the restrictions imposed by the governor were illegal. A court ruled in their favor.

At a personal level across the country, similar divides are evident as some are insisting businesses can’t force them to wear masks. In addition to the shootings I’ve reported earlier, a Target employee broke his arm when he was pushed to the ground while in a skirmish with two California men who were being escorted from the store for refusing to wear a mask. Some businesses are opening in defiance of state orders and in some cases the governors are encouraging it. Some of the businesses opening illegally are surrounded by armed citizens.

In other evidence of political divergence at this point in the pandemic, mainstream media and right-leaning media have very different focus. While the New York Times, CNN, PBS, CBS and others continuing to prominently report on a pandemic that has killed nearly 90,000 Americans, the headlines on Fox News and similar media is dominated by the “unmasking” of General Flynn. On the mobile app for Fox News this morning, ten of the  top eleven stories were about General Flynn. The eleventh was about President Trump disagreeing with Dr. Fauci.

The latest numbers released by the Tennessee officials reports 16,370 cases and 273 total deaths from COVID-19. This reflects an increase of 260 new cases and nine deaths in the last 24 hours. After two days of higher numbers of increases, this puts the state back toward the range of daily increases we’d experienced before. The state reports 8,993 tests were administered yesterday, bringing our total to 292,917.

I have a hard time being more specific because, unlike national or even world numbers, I can’t find a good daily count of positive diagnoses for the state. The graph provided on the state site tracks them by date of origin, which means if I’m diagnosed today, they credit that diagnosis to the date they believe I became ill. It causes big lags in data. They do report daily numbers of confirmed test results each day, but I haven’t written those down to keep track.

Locally, the Knox County Health Department is reporting a drop of two cases from yesterday, to 305 total cases. How is this possible, you might ask? Probably because numbers previously assigned to Knox County were found to be more appropriately assigned to other counties. See below for clarification as to how many, if any actual cases were diagnosed yesterday. For example, if we had ten new cases, but transferred twelve, the official tally for the day would be -2.

In additional local information, there are currently 67 active cases reported, with one patient hospitalized. If we can maintain these numbers over the next week or so, it would be a very encouraging outcome for our first state re-opening.

Dr. Buchanan addressed the press conference today, expressing gratitude to a number of workers at the Health Department, including epidemiologists, environmental health team, business re-opening team and others. She confirmed the above number. Regarding to the number being lower, she said several cases had been transferred out of our jurisdiction. She said there are 3 probable cases.

She spent some time discussing antibody tests. Explaining that the time between illness and antibody production and cross-positives with other corona viruses yields our current antibody tests unreliable.