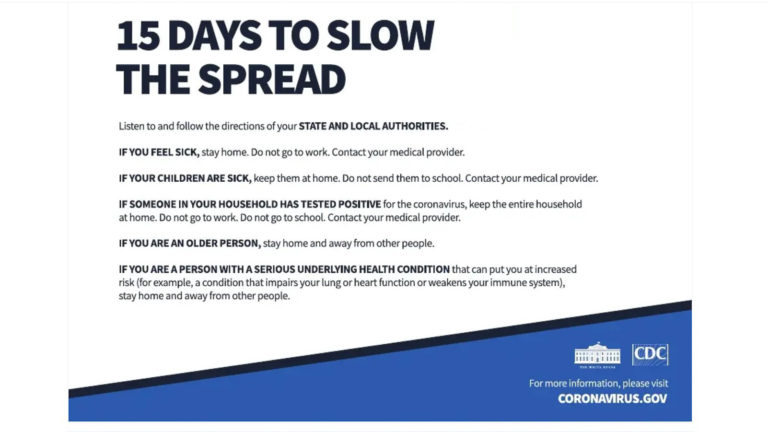 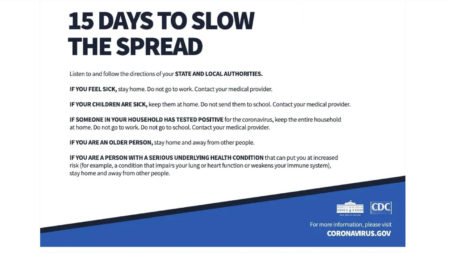 It seems every day brings another explosion of developments surrounding COVID-19, and yesterday was no exception. As has been the case over the last weeks, crossed signals continued, but with more agencies raising the intensity level and coming closer to presenting a unified voice. The Dow dropped nearly 3,000 points, its largest single-day drop in history.

The CDC released mid-day numbers in their first official update since mid-day Friday. Whereas Friday they reported 1,629 infections and 41 deaths in the U.S., seventy-two hours later the number of confirmed cases had more than doubled to 3,487 and there were 68 deaths. Their latest recommendation was for gatherings of no more than 50 people. 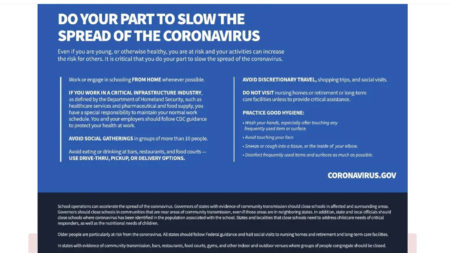 On the national level, the briefing and conference was perhaps one of the most comprehensive of the Trump Presidency. More questions were answered, more experts were assembled, and more information was delivered. To be sure, it wasn’t all clear, but the session gave the impression that they get the concern, seem less interested in deflecting blame, and are truly trying to bring the science to bear.

The emphasis was on “15 days to slow the spread,” with a set of recommendations intended for the next fifteen days, unless information changes, with the likelihood that this is simply the beginning of a larger response. Many of the suggestions had been heard before, but among the new items was the recommendation that there be no gatherings larger than 10 people, putting these recommendations at odds with the most recent guidance from the CDC (above).

They strongly suggested school closings (many of which have already happened) and they emphasized the role millennials will have in stopping the spread by not congregating. They also emphasized that this plan will only work if people across the country cooperate.

Meanwhile, back in Knoxville, Mayor Kincannon declared a State of Emergency. This enables her to more quickly act to spend money on the crisis as needed. She also closed all Knoxville Senior Centers in an effort to disperse some of the most vulnerable citizens. She also recommended that restaurants shift to take out and/or delivery and reduce seating capacity to fifty percent, with patrons sitting at least six feet apart.

In other news, a number of restaurants, businesses, and bars did start closing their doors, with some of them choosing to do delivery and carry out. Others remain open. Knox County Schools announced they would extend Spring Break for an additional two weeks. UT announced that students would not return to campus for the remainder of the semester. The Rossini Festival was postponed.

The most surprising and ominous note of the day came when President Trump was asked how long his team feels this may continue. His answer? July or August. A later clarification indicated this was perhaps not the worst of the recommendations, but the implication was that this will likely not be a matter of a couple of weeks or even a couple of months, but much longer. Here’s hoping the situation improves much more rapidly.

At the end of the day, I continue to struggle. If these things are what we need to do, why not make them mandatory? On the other hand, do we realize that our government is taking away our constitutional right to assembly? If they do it now, will they realize they can do it in the future for political reasons? Contradictory and incompatible impulses. To be very clear, I am encouraging everyone to follow all recommendations from medical professionals, including those above.

And my heart breaks for those among us who will be hurt the most: the hourly workers, the elderly who are afraid and may become dangerously ill, the uninsured, and the homeless who have no voice, no control, and few choices. I feel strongly we should do what we are asked at this time, for the greater good. If we don’t, these measures and the pain that goes with them will be for nothing, as the virus will not be contained. We have hard choices to make, and our lives and those of people we love may depend on the decisions we make.

An effort to help service industry workers: GoFundMe (This link has been removed until I can verify its legitimacy)

Buy Gift Cards From Local Businesses via KnoxvillePage (more have been added and if you want yours there, email me at knoxvilleurbanguy@gmail.com)