A Preview of “Blithe Spirit” Presented by Clarence Brown Theatre 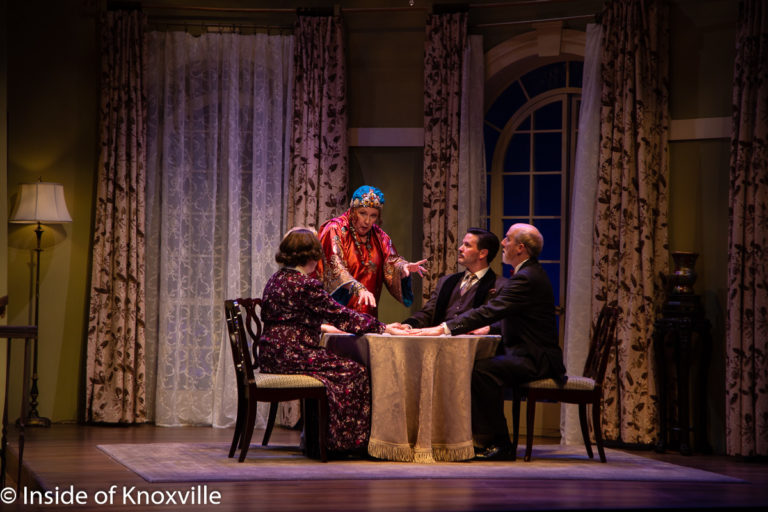 Clarence Brown Theatre continues its season with Noël Coward’s comedy “Blithe Spirit,” directed by Sharon Ott. Debuted in London in 1941, it ran for a record 1,997 performances and then followed with a successful run on Broadway. It was later adapted for film, a musical, television, and radio. It has since enjoyed a number of revivals both in London and New York.

It may surprise some that comedies would emerge during World War II in London. As it turns out, Mr. Coward’s flat was bombed and he traveled to the coast with an actress where they discussed his idea of a comedy involving ghosts, a topic he knew might be met with some objection in death-riddled London. He wrote the play in days and acknowledged when it was finished that he knew it would be a success.

The medium was invited to the party for laughs and to provide material for Charles’s upcoming novel. When a seance ensues, unexpected consequences turn a farcical evening into much more than Charles had planned. Edith, a maid (Madeline Rowe), who serves up much of the humor in the play, turns out to be much more than an overly zealous housekeeper and plays an important role in the resolution of the plot.

Serious times sometimes call for comedic relief, and the play was received warmly as such during the height of World War II. 2020 doesn’t seem like a bad time to inject some comedy into our lives. The play begins tonight and runs through February 23. You may find tickets here.