Yoga 865 Opens in the Old City 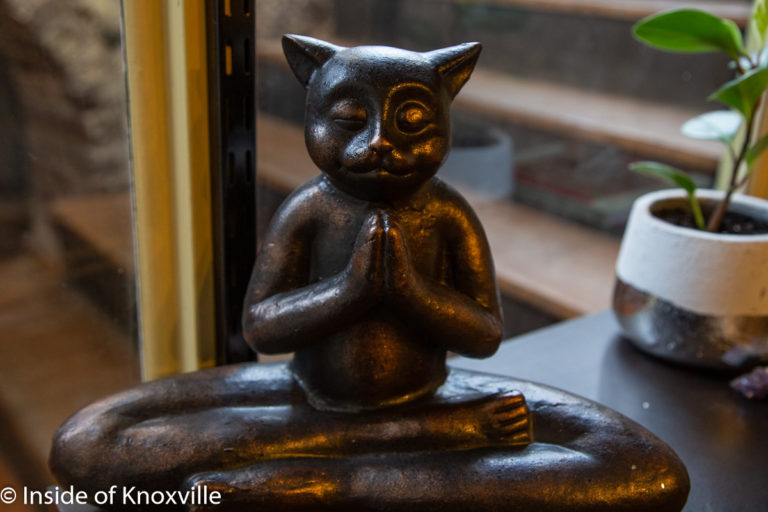 Yoga 865 opened to its first class last week. Located in the Old City at 103 West Jackson, it is downstairs from Lox Salon and next to the new barbershop. Emily Pace is the owner and Micole Price will help manage the space. They will each teach classes.

Emily grew up in Charlotte, North Carolina, and left for college at Washington and Lee University where she majored in French. She moved to France, then later to New York City to be an actor and to be close to the art scene. She visited her brother, who was then a student at UT, and never left Knoxville again. She got her MA in French, along with a PhD and now teaches at UT. (At UT, she works with Jenny Salata from French Fried Vintage, whom she met in France).

Emily and her brother shared an apartment in the Emporium, and that is where she met her future husband. She and Brian O’Connor walked down Jackson Avenue on their first date, which is what makes the location of the studio so meaningful to her. Now married five years, he did the construction work to get the space ready, including construction of the great barn doors at the back.

She started yoga with her mom in Charlotte when she was twelve years old. She continued off and on until college, at which point it became more of a passion. In 2015 she attended Ashville Yoga for her training. She taught at Real Hot Yoga where she learned to teach under Betty Kalister.

Micole also worked at Real Hot Yoga, and that’s where the two first connected. Micole also taught at Barre Belle when it was downtown and worked with Terry Bullman. She has over fifteen years of experience with yoga. She is Brynne Gonzalez’ neighbor (she leases the space) and she was excited to have this opportunity to work with Emily. On January 12th, they welcomed their first class to the new space. Micole teaches Gentle Flow and Power Flow classes. She also has a toddler at home and welcomes the flexible hours.

They will have regular class times and will utilize the Mind Body App. After the Grand Opening on February 1st, they plan to expand into shorter classes and meditation. They will also begin offering afternoon, evening, and Saturday classes, along with workshops. Emily said, “Yoga gives us energy to create in life. It makes life more vibrant.” She says she wants to combine yoga and creative expression such as dance, writing, spoken word, and more.

Coming soon, Emily will teach restorative yoga on Sunday afternoons at 4:30 (with all the props), and Kundalini class will be offered on Tuesdays. Power Yoga will be offered on Thursdays, and the two say that all the vinyasa classes are creative and different every time. Costs are $30 for a 30-day trial, Founders get 10 classes for $100 or 5 for $75. It costs $19 to drop in, and $89 a month gets unlimited classes.

The two are excited to be in the light-filled space and have already started teaching a class for home-schooled children and a special class for the Ice Bears hockey team. As those two groups of students imply, they say they want everyone to feel welcome. Whether beginners or long-time practitioners, there is a place for everyone.