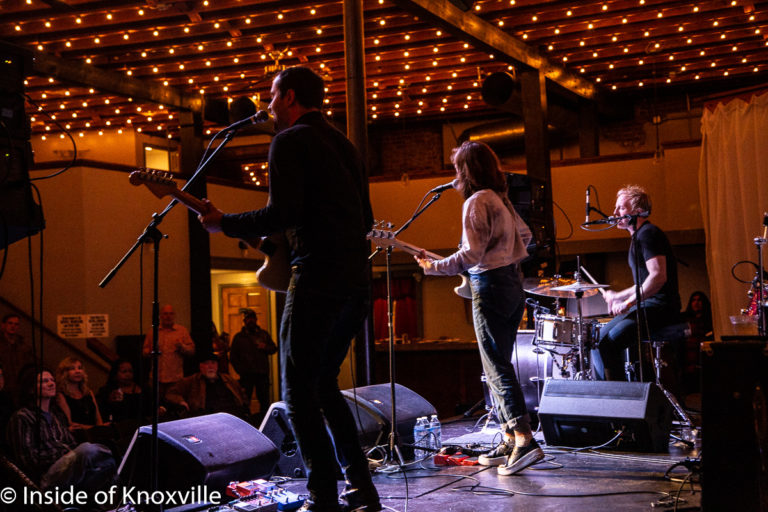 Years ago Waylon Jennings expressed his opinion about what makes life worth living in his great song “Luckenbach, Texas.” I’d say good friends and family first, without a question. Close behind that, for me, would be good food and music. I sampled some of each last night and if that sounds interesting to you, there is a lot more where that came from.

I’m generally very strict about writing only about downtown. I’m going to break that rule just this once to tell you about a wonderful meal I had at Holly’s Gourmets Market and Cafe. Urban Woman and I, along with a group of other lucky people were invited to join Holly for a meal introducing items on their menu. The cafe offers breakfast and lunch from 7:00 AM to 3:00 PM each day and is available for events after hours. The same staff also caters to other sites.

The meal started with a Hillbilly Niçoise with smoked trout, radishes, capers, hard cooked egg, tomato chow chow and Cruze Farm buttermilk ranch. Croutons made of cornbred gave it the hillbilly touch. It was divine. The shrimp and grits that followed featured Cardina shrimp, Shelton Farm cheesy grits, and gumbo gravy with peppers and andouille sausage.

The main course featured a pork loin stuffed with collards and celery root with a dijon cream, broccolini and a cauliflower gratin that was the talk of our table. Dessert was more than up to the standard set by the food that preceded it. The marjolaine featured an almond meringue with butter chocolate, mocha-hazelnut butter cream, and raspberries and chocolate ganache.

The meal served as a reminder of the excellent food we are currently offered in Knoxville. Recent years have seen a renaissance in numerous directions in our city and this is certainly a culinary high point, likely in the city’s history. Look for a better description and analysis of the meal likely coming soon on the Knox Foodie blog and more about the event on the Blue Streak blog.

After such good food, the only thing that could finish off a perfect night would be music. I stopped into the first night of Waynestock a bit late because of dinner and caught the last bit of Mark and the set by Ex-Gold. First night music tilted toward a driving, careening rock-and-roll in the universe of the punk world. Other nights will range from country to goth to pop and singer-songwriter, so there’s something for everyone.

You can catch the final two nights of Waynestock tonight and tomorrow night at Relix Theatre. Entrance is only five dollars and proceeds go to two local families in need who are part of Knoxville’s musical universe. Come support them, hear some great music and find new favorite bands.