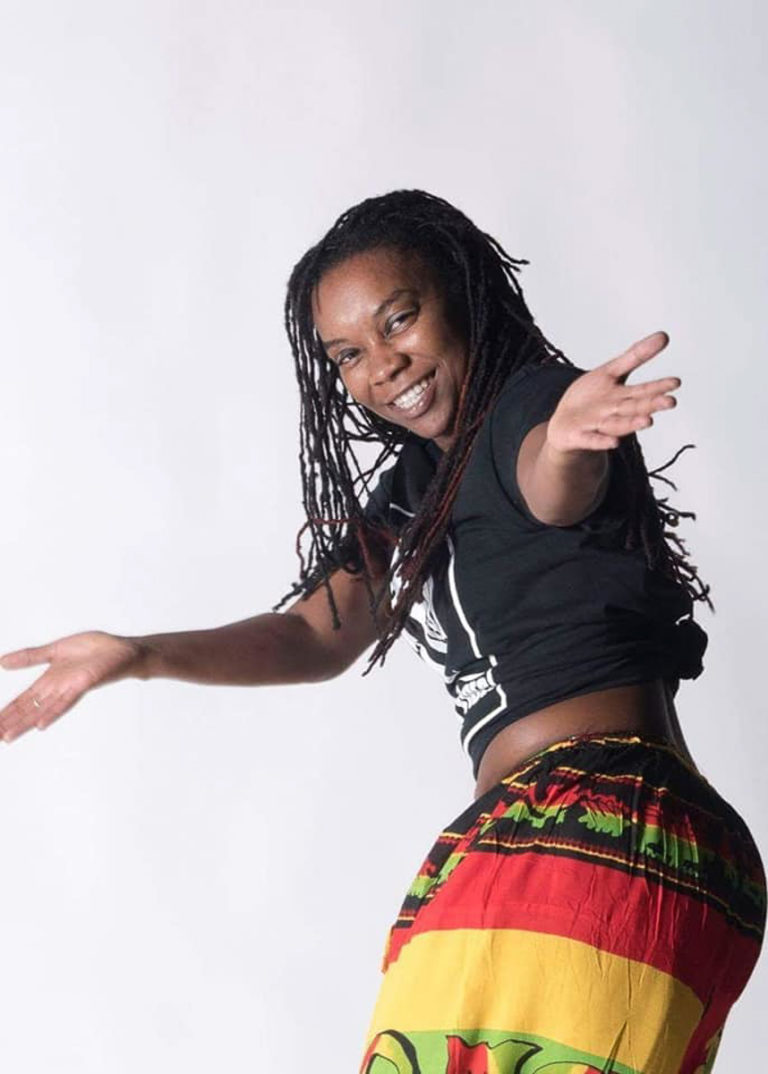 When Jamie McGowan arrived in Knoxville last August to assume her position as Director of Global Research at the University of Tennessee, she landed on a mission to find Knoxville’s African dance community. It wasn’t easy. She ultimately connected with dancer Alaba Mitchum, a professional African dancer, originally from St. Louis, and Obayana Ajanaku, the African drum teacher at Austin East High School and leader of his own group of drummers, Indigenous Vibes. The three have teamed up to present weekly African dance classes at the Broadway Academy of Performing Arts and Events Center.

Jamie grew up in the Midwest, eventually attending the University of Illinois, where she obtained multiple degrees in geography, culminating in a PhD in Geography with a focus on Africa. She’d first become interested in Africa when she joined the Anti-Apartheid Movement. As an environmentalist, Africa also piqued her interest. She worked for the Peace Corps in Ghana for two years and has since traveled to the continent often.

While Associate Director of the Center for African Studies at the University of Illinois more than a decade ago, she noticed and subsequently fell in love with African dance.

I tried it and loved it. The drummers alone are amazing. The group of drummers together are captivating and it all elevates your spirits. It always kept my spirits high during hard times. I’ve tried to find or build that community everywhere I’ve gone.

Her search in Knoxville ultimately led to Obayana. Obayana has been drumming since age six. Originally from Memphis, his mother lived in Knoxville and he moved back and forth between the two cities until settling here at age twelve. He attended Austin East and Tennessee State University.

Obayana has been the African drum instructor at Austin East for fourteen years and his roots go back farther with drumming and the Pan African movement. His mother, Nkechi Ajanaku, was involved with the Afrocentric Movement here in Knoxville and founded Kuumba Festival, a celebration of local African American Art, in 1989. Obayana is now one of the driving forces behind one of Knoxville’s oldest festivals.

At one time Obayana worked as a janitor at the Village Cultural Arts Center in Nashville. After working there for several months, he drummed for class and began teaching when the center lost its teacher. “It chose me. I taught children the way I was taught.” He began seeking out other teachers across the country to see how they taught. He once drove to Washington, D.C. to attend a one-hour class with Mamandy Keïta. His drums have taken him professionally to Russia, Brazil, and throughout the U.S. He’s traveled to Nigeria and Cuba to hear other indigenous drummers. He smiled and said, “I want to be the Anthony Bourdain of international drumming.”

He pointed out that drumming was outlawed during slavery, and a disconnect between former Africans and their culture began.

When kids catch it, they become more confident and disciplined. They learn to push through. When their hands hurt, I tell them sometimes life hurts, but you’ve got to push through. Drumming is a tool. It’s about life. It’s not my job, it’s my life. It’s what was done for me, and I hope to do it for others.

Obayana said though they’ve tried to have classes before, they needed someone to promote, organize, and make the classes work. “It’s important because it allows others to be exposed beyond Austin East.” Austin East’s program of African dance and drumming is the only one like it in Tennessee as far as he is aware. Alaba, who learned dance starting at age twelve in the Village Cultural Arts Center in Nashville, moved to Knoxville so her son could be a part of the program at Austin East.

Obayana introduced Jamie and Alaba to one another. Jamie says, of the classes that started last October, “I’m committed to what it means to people and the continuity of the cultural past.” She says the class attracts all skill levels and ages, from seven years old to seniors. She says the class is racially diverse and some come every week, while others drop in when it fits their schedule. She said they’ve had one person in a wheelchair join in the fun. The group hopes to attract grant money and donations to bring in a series of master teachers and to enhance Kuumba.

The classes begin at 7:15 p.m. each Wednesday at the Broadway Academy of Performing Arts and Events Center at 706 N. Broadway. The cost is $10 per person ($7 for students). They would love for you to come and join in the fun.