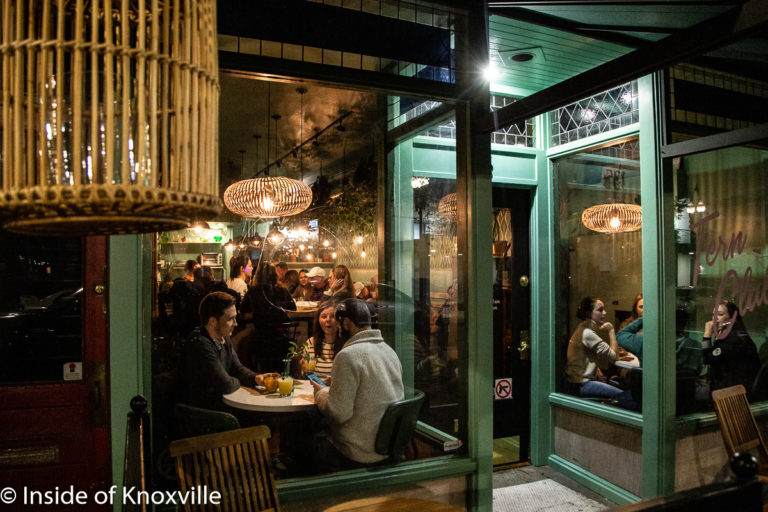 One of the openings I missed recently was one I’m really excited about. I first wrote about Tern Club last June, including the back story of co-owners Ryan Shanley and Jocelyn Morin. The couple moved from the northeastern U.S., searching for a city that met all their needs and offered an opportunity to launch the Tiki club of their dreams. They found that city in Knoxville.

In early November the couple opened Tern Club at 135 S. Gay Street. Designed to honor the mid-century Tiki bar tradition, while offering a modern twist on the idea, Tern Club opened to lines out the door. Inside patrons found classic cocktails like the Mai Tai, which I understood to be incredible, but Urban Woman and I had never experienced one until we dropped in last week. She made it clear that won’t be the last we see of the beverage.

The interior and exterior reveal some elements of Tiki décor. There is a lush canopy of live plants over the primary seating area, which provides a cozy spot for sampling the menu of beer, cocktails, and light foods. The food menu includes a Cuban sandwich and other small items.

Before I was able to make it into the bar as a customer, I ran into Rodney, a manager at McScrooge’s Wine and Spirits, who asked me if I’d made it there yet. When I said I hadn’t, he launched into one of the most enthusiastic endorsements of any business that I believe I’ve ever heard. He said he’s loved Tiki and studied it for decades and that they’ve nailed the originals while adding their own thing. I suspect he knows what he’s talking about.

Judging from the crowds, those knowledgeable, and those like Urban Woman and myself who are much less so, enjoy the vibe and the beverages alike. Also, some of my favorite humans work behind the bar and will serve you up right and make you happy. It’s a great spot to check out this holiday weekend and into the New Year.