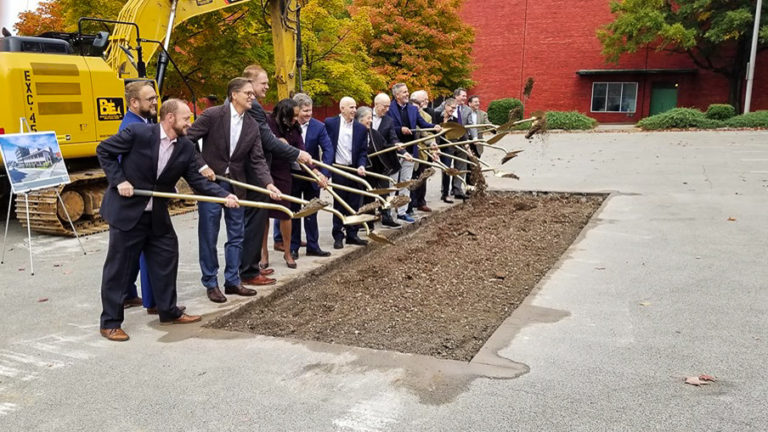 It’s been many years coming. The reclamation of the city block bounded by Church Ave., Cumberland Ave., Locust St., and Henley St. has seen several aborted attempts at returning it to life. I first reported on the current proposal (though it has since evolved) over two years ago. Most recently, I presented the current version of the plan last May. With the first scoops of dirt moved by local dignitaries today, the project is officially underway.

It is being called “one of the biggest private projects in the history of downtown Knoxville” by the developers. The project includes 237 apartments with parking and amenities and a conversion of the former Supreme Court and adjacent building into a hotel. It’s a joint project with Dover Signature Properties and Bristol Development Group with a projected total investment of $76,000,000.

Dover is based locally, and while Bristol Development is based in Nashville, its CEO, Charles Carlisle, is a UT graduate who started his career in Knoxville. The project blends new construction with a renovation and re-purposing of an older building. It’s something Dover Properties has done successfully with numerous local, historic properties, such as Knox High Apartments (formerly Knoxville High School) and Hyatt Place (formerly the Farragut Hotel).

Knoxville City Mayor Rogero and Knox County Mayor Jacobs were on hand for the event, along with numerous city council and county commission members and others. Mayor Rogero said, “This entire block has been underutilized for many decades, and the buildings have been completely vacant for about 15 years . . . This is an important step forward for downtown, and it’s been a long time coming.”

While discussion and debate regarding every project proposed for downtown, from its architectural qualities to its range of uses, is encouraged, it’s important to consider all the impacts. A parking lot sitting on a long-abandoned city block is now the site of a massive investment. 300 or more new residents will move into downtown and more will visit in the new hotel development. Those are powerful boosts to downtown development’s continuing momentum.