The 2019 Maker City Summit is This Sunday: Why Does It Matter? 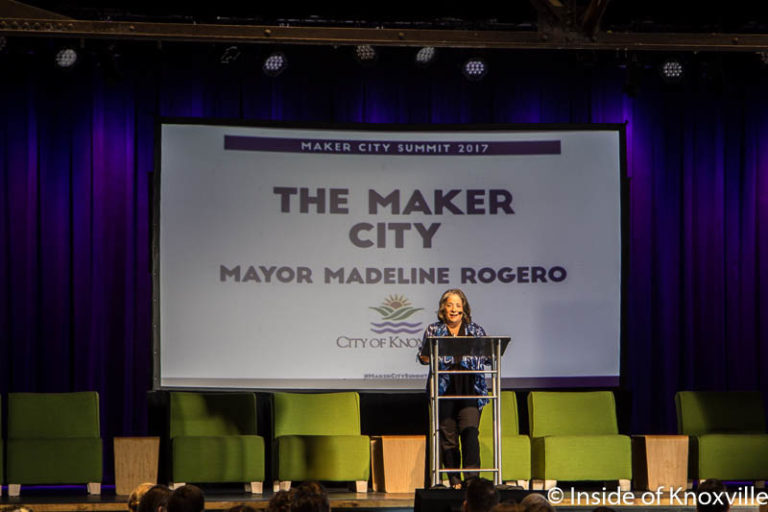 In 2016, Etsy named Knoxville one of the thirteen cities recognized in the U.S. for their maker culture. In 2017, Knoxville branded itself as The Maker City. An annual conference or summit was established to bring the Knoxville maker and entrepreneurial communities together for a day mixing inspiration and practical advice for those aspiring to join the movement or move their particular endeavor to the next level. This year’s rendition will be this Sunday at the Mill and Mine.

This year’s summit promises to be one of the most diverse ever, both in terms of the presenters and the various fields represented. The Maker Tent, as it turns out, is a big one, including artisans of every stripe. Mayor Rogero will kick off the event at 10:30 AM and panels, speakers and individual and small-group sessions will follow.

This year’s keynote speaker is Shunta Grant, host of the Business, Joy & Life podcast. Panels will discuss topics ranging from making the Maker community welcoming to all, a focus on pricing your work while valuing what you do, and dealing with the Impostor Syndrome. Jonathan “Courageous” Clark, slam poet and director of The Carpetbag Theatre will give a final keynote and the conference adjourns at 4:00 PM, followed by a meetup and an after party.

I met with two of our local makers who are serving as this year’s Summit Co-Chairs, Alaina Smith and Tanika Harper, to learn more about the summit and to get learn why it matters to local makers to have this sort of event or this sort of community of like-minded individuals. Alaina’s company, Cold Gold, produces fashion accessories, while Tanika’s company, Harper’s Naturals, produces a line of skin care products.

Tanika the plans for this year’s summit focused on getting a wide range of participation, with intention and thought given to including different groups. Making the point that the maker community is for everyone, she said, “We want people to look at our group and see a place for themselves.” Alaina echoed the sentiment, pointing out the range of products represented, from “food to music and every kind of creative.”

Alaina said she felt she had limited her perspective on how inclusive the group can be, because she falls into the middle of the pack of makers, producing leather goods and jewelry, which have a traditional spot at arts and craft fairs. She worked at Rala for six years while building her product line and expressed great gratitude to its owner, Nanci Solomon.

She said the maker movement has “given me the confidence that I can do this. It’s what I want to do and I have something to offer. It’s not just a transitional moment. It allows us to grow as makers and offer support to others.

Tanika started Harper’s Naturals out of necessity. When she was diagnosed with an autoimmune disease, it helped her understand why her body reacted negatively to skin care products, including many that were labeled “natural.” Needing a healthier life, she began to make her own products. They worked. She shared them with family, then friends. Demand grew and she started charging and eventually realized her personal experiment had become a business. She also considers herself an entrepreneur and is confident she will start other companies.

She credits the Chamber with helping her understand how to grow the business. “I realized I wasn’t an impostor. I realized that I wasn’t alone and I was challenged and encouraged to move forward. The maker community has helped connect me to others.

Both Tanika and Alaina are on the Mayor’s Maker Council and Alaina was among the group that first approached Mayor Rogero about the idea of getting behind the Maker Movement as a focus for the city. She was immediately supportive and the council was born. The two point out that they are now seeing personal growth among members of the group as those people step into leadership or educational roles. Alaina added, “Without those people I would not have been able to do this.

The conference is this Sunday, September 8, and registration and networking begins at 9:30 AM. Registration is $45 in advance and $50 the day of the event. You may register online here.