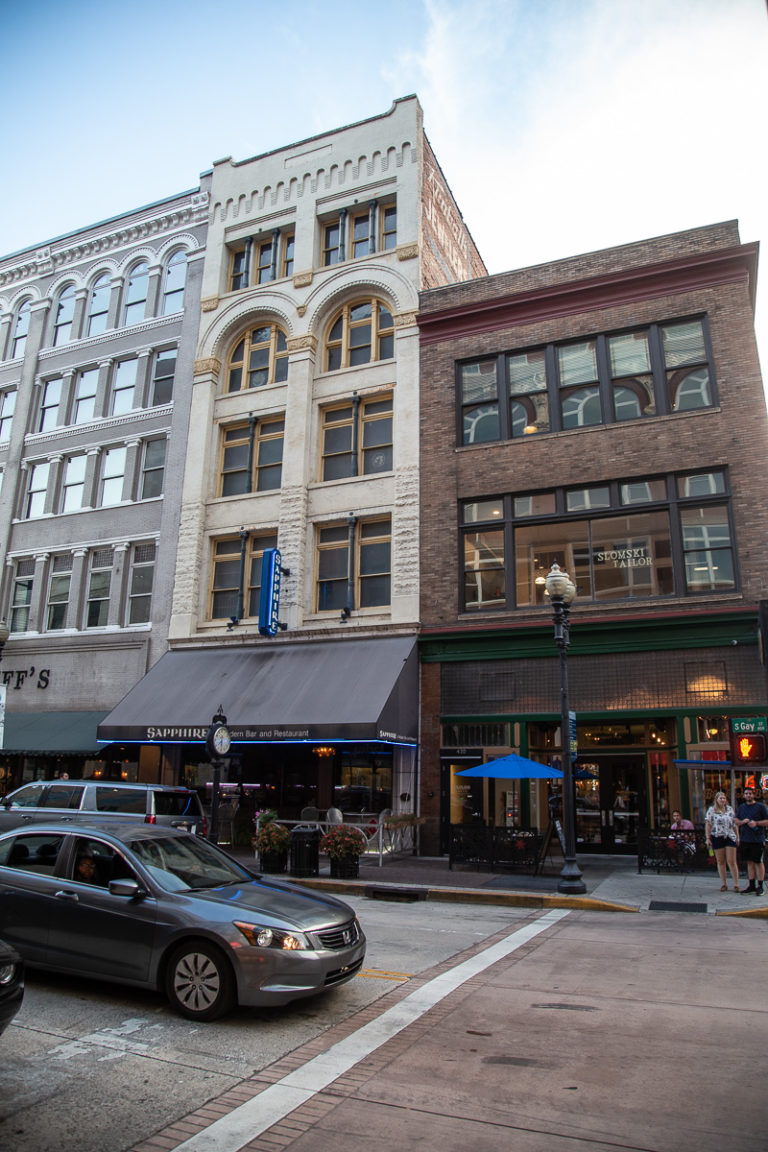 The building at 428 South Gay Street, which houses Sapphire in its storefront, was built after the 1897 Gay Street Fire. The current five-story building replaced a shorter, three-story building destroyed by the fire.  A shoe store initially, it later became Fidelity Trust Bank for nine years. In 1929 it became Hope Brothers Jewelry, eventually becoming Kimball’s Jewelers.

Taken together, it was a jewelry store from 1929 to 2003. You’ll find the Hope Brothers name etched into the facade of the building. After remaining empty for two years, it became home to Sapphire in 2005. With only two owners in its fourteen years the night spot, currently owned by Aaron Thompson, has remained a popular cocktail bar throughout the era of downtown Knoxville’s resurgence.

The building, previously owned by David Dewhirst, was recently sold to Ilana Brodt, wife of Avi Zenatti who owns Kopita. She recalled the story of local broker George Brown taking the couple to dinner at J.C. Holdway. Walking around downtown afterward, he mentioned that the building was for sale. She immediately told him she wanted it.

Ilana has invested in Knoxville for decades and recently made the move to the city from her home in Jupiter, Florida. She has family in Germany and Israel and is an accomplished artist. She has a gallery in Jupiter, Florida, and she garnered attention for her work as shown in Miami’s Art Basel and Chicago’s SOFA. She is interested in finding a location for a gallery in Knoxville.

When she purchased the building, she wasn’t certain what she’d do with it. She learned the history of the building and considered its history as a jewelry exchange, and thought about returning it to a retail building, perhaps featuring high-end fashion, which she feels is in short supply in Knoxville. “I love historic buildings. They should be respected. They all have stories and people lived and breathed and loved there. It’s sad to see it not cared for.”

Noting all the recent vibrancy in downtown Knoxville, she said, “Knoxville is coming more alive. People are coming here, restaurants, chefs.” She said that she feels many millennials have traveled and experienced more that the world has to offer. They are looking for more from their home cities and she feels that in our city. “It’s like a new beat and I love it.”

The Hope Brothers building, like a number of other buildings along Gay Street has a renovated first floor, but the upper floors sit empty or are deteriorated and used for storage. Such is the case with 428 South Gay. From the front, it appears to be a completely redeveloped building, but from the back, boarded and broken windows are visible.

It’s not an easy re-development prospect. Materials for the construction of the upper floor construction need to be taken up, the noise from the construction will be a challenge and the first floor will have to be altered to support the increased use of the building. Ilana stressed that Aaron is a great tenant and she hopes Sapphire is located at its current address for many years to come. That said, there will be changes.

Specific plans for the interior are still being determined and Ilana is working with Design Innovation Architects to develop the plans. The basement will likely be divided between storage space for residents and some use for Sapphire. The first floor will have to include a stairwell and elevator for the residents, so some impact on the space on that floor is inevitable. There are several possibilities under consideration for restoring square footage for that floor.

The upper floors will be residences. There will be two residences on each of three floors, with one or two residences on the top floor, for a total of seven or eight new homes. It is yet-to-be-determined whether these will be apartments, condos or a combination of the two. They are exploring creative ways to get light into the interior of the building. She says that the original flooring will be preserved, but will have to be removed temporarily in order to place sound baffling between each floor.

Ilana stressed that the journey is just beginning and there are many decisions to be made, hurdles to be cleared and permits and approvals to be gathered before the project begins. Once plans are announced, I hope to give readers a look, perhaps with pictures of inside the building both before and after the work.