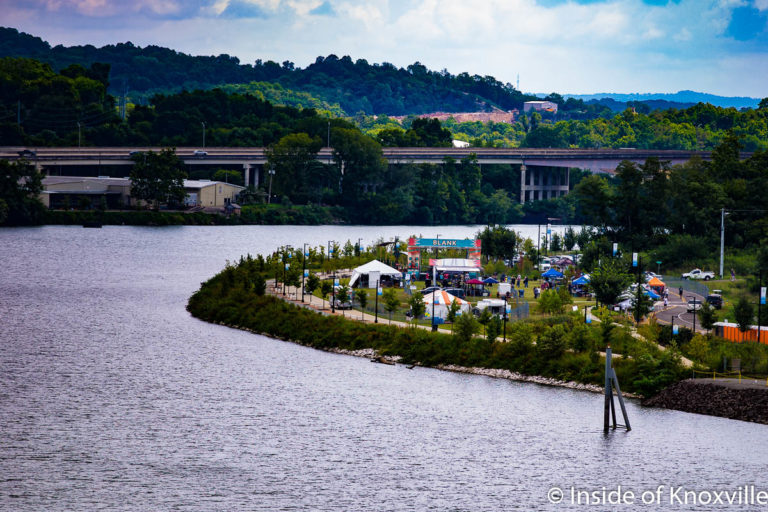 Last August something happened that had never happened before: South Knoxville, on the southern bank of the Tennessee River, with the backdrop of the city skyline, played host to its first ever music festival. Second Bell, the brainchild of Rusty Odom of Blank Newspaper, brought two stages and ten hours of music in a beautiful setting to Suttree Landing Park. A day of celebration, sunlight, and music. And this Saturday, it is back.

Most people know Rusty as the lanky, good-natured owner and operator of Blank Newspaper. Not everyone knows he’s also an offensive coordinator with Bearden Youth Football, coaching them up five days a week in the late summer and fall. He said a highlight of his nine years came watching his former players win the state championship for West High School. He watched that game on television with Patrick Joyce behind the bar. Patrick just happened to be a fellow coach with those guys and will be coaching up the bar staff at Second Bell. 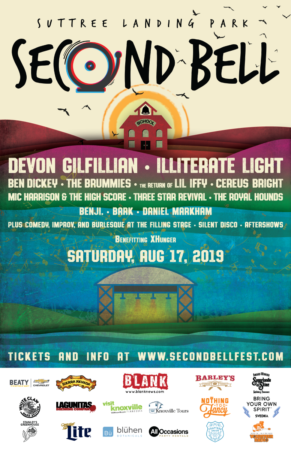 Rusty said the bar will have an all-star staff. It’s just one of the many touches designed to make the festival an enjoyable experience. It’s also unique in that the two stages (one with a gorgeous backdrop of the city) alternate time slots so that everyone present can hear every note of every artist. It also allows a constant flow of music — as one stage falls silent, the next band kicks in.

The doors open at 11:00 and the music starts at noon, with a blend of local artists and some of the hottest up-and-coming artists in the country. Always envisioned as a showcase for local musicians alongside more widely known artists, the lineup holds true-to-form. The first couple of sets are thirty minutes each, followed by forty-five minute sets for the remaining bands until the closer, Devon Gilfillian, turns in an hour long set, ending the festival at 10:00 PM. 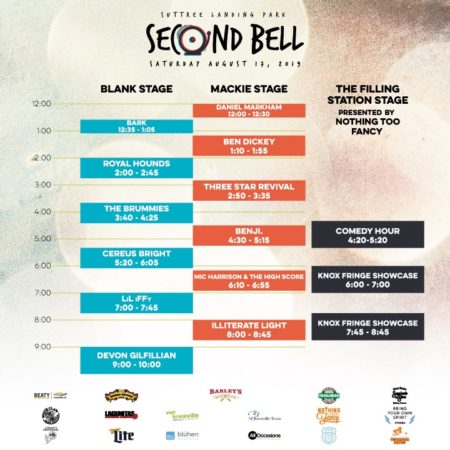 Local artist Lil iFFy is staging a return at the festival which Rusty said just fell into place. Those who have had the pleasure of seeing a Lil iFFy show or of knowing Wil Wright, iFFy’s alter-ego, will appreciate what he recently said to Rusty, “Word play is my native language.”

Of the national artists, Rusty said it is impossible to single one out — and then he did just that — saying, “Illiterate Light is going to blow people away.” From Virginia, the band is a two-piece, with Jeff Gorman (nephew of Steve Gorman, drummer for the Black Crowes) on guitar, vocals and bass and Jake Cochran on a stand up drum kit. I’m pumped to see Benji, again. He was one of my highlights from Rhythm N’ Blooms. And that’s not to mention the Brummies, formerly known as John and Jakob and one of my favorite bands from Rhythm N’ Blooms past.

It all comes together, Odom says because of the family which has formed around Blank News and the businesses which support it. You’ll know them when you see them, because the backs of their shirts for the day will not say “Staff,” but rather, “Family.” The local lineup includes artists championed by the newspaper, such as Bark, The Royal Hounds and Three Star Revival. “I started this to highlight local artists so friends and neighbors can see this great talent in one place for an affordable price. It’s important to me that people feel that pride.”

Other features of this year’s festival include a comedy and dance tent. Comedy was off-site last year and has been brought closer this year with other fun to follow under the tent. Called The Filling Stage, it is sponsored by Nothing Too Fancy. Another difference from last year is the bar will be moved to the other side of the field to allow more open views of the city and the river. You’ll also find a tent for XHunger and a donation is planned to that organization.

There will also be more shade. In addition to the comedy tent, Bluhen Botanicals will have a tent with information about their products. The VIP tent will be twice as large this year, offering more shade to go along with the t-shirt that comes with the package. With temperatures predicted to be in the mid-nineties, let me encourage you to consider paying the extra for the option of occasionally sitting in the shade of the VIP tent. Rusty pointed out how many similar events, including this one, owe a debt of gratitude to Cherokee Distributing and Sugarlands Distilling Company.

You’ll find three or four food trucks along with a dedicated dessert truck. With the food, drink and shade expanded, it’s a great chance to see what the buzz is about festivals. With the small footprint and well-paced shows, it’s a manageable bite for people who may not have been to a festival before, and it’s a great day, too, for the more experienced festival goers. “I tried to create the most comfortable festival experience possible.”

I appreciate all the work that has gone into South Knoxville and the waterfront. The community is on fire, right now, and I feel blessed to be a small part of the history of that area. People will look back on this era as a renaissance. We are lucky to have great support from the city. Events and KPD have been great to work with.

Tickets for this event are $30 for general admission and $75 for VIP and may be found here. Children under the age of 8 are free.