Adventure Town? Coolest City? It’s Just What We Do. 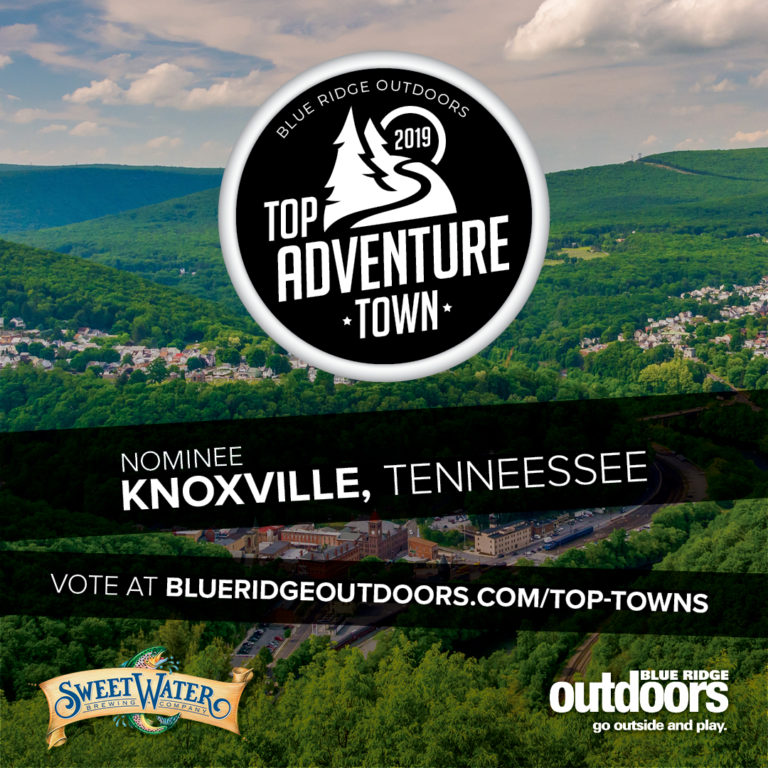 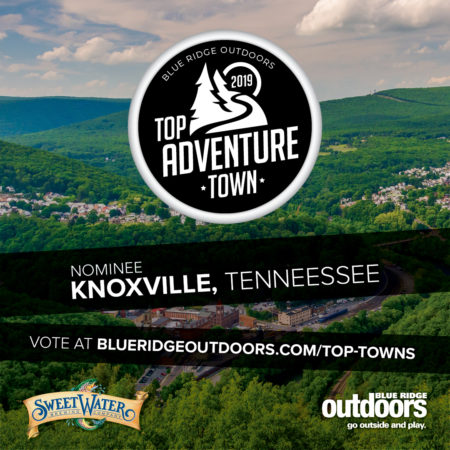 Knoxville continues to make various buzz lists. Our reputation as an adventure town has certainly grown in recent years with the installation of a zip line at Ijams, the Urban Wilderness in general, our extended greenways and our proximity to the Great Smoky Mountains National Park. Much of what has happened to expand that reputation rests on the hard work of groups like the Appalachian Mountain Bike Club. Our increased profile also rests on all of us to spread the word.

How can you do that? I’m glad you asked. Blue Ridge Outdoors magazine and Sweetwater Brewing Company are presenting their eighth annual Top Adventure Towns contest. The contest covers towns and cities in the Mid-Atlantic and southeastern United States. The contest started yesterday and fine citizens such as yourselves are called upon to vote. Repeatedly.

Knoxville is in the “large town” category. That puts us against cities as wide-ranging as Chattanooga and Asheville, all the way to Washington, D.C. and Baltimore, Maryland. The voting will happen in rounds and the field will narrow until a winner is declared. The winners in each category will be featured in the magazine’s end-of-the-year edition. Start voting now and let’s spread the word about the good thing we have going. Vote here and share this information around to all your friends.

So, we may be an “adventure town,” but where does the “cool” factor enter the equation? Afar magazine, in a recently published article suggests that we may just be cooler than some of the other Tennessee cities that get a lot of attention. We’re looking at you, Nashville.

The article starts with a little nod to our fallow period of a decade and more ago and goes on to note that we’ve become an outdoor mecca (see above) and have built something special centering on Market Square. There are lots of shout-outs to go around. The Oliver and its restaurants and bar, and the more-recent Tennessean get some ink.

Our range of culinary appeal is touted with J.C. Holdway, Blackberry Farm, Cruze Farm and Yassin’s also getting attention. Pretentious Glass and Beer and SoKno Taco also work their way in. Music is featured with mentions of the Blue Plate Special, the Tennessee Theatre and Rhythm N’ Blooms.

When I started this blog, just a bit over nine years ago, so much of this didn’t exist and it is amazing to stop and think about the changes. The Daylight Building, now housing J.C. Holdway was very recently an abandoned and empty building. Yassin had not yet arrived to establish the Nicest Place in America. New restaurants opening in south Knoxville? Forget about it.

The other thing that strikes me is that this article could be re-written substituting other restaurants, activities and hotels and it would still be just as valid and strong an argument for the city’s cool factor. This truly is a special era in Knoxville and we need to cherish it. As Neil Young once said, “Long May You Run.”

One final note on the “cool” factor and tourism: I don’t have numbers to back it up, but it seems to me we’re getting a much larger contingent of national and international visitors. Local merchants tell me lots of stories of visitors to the city coming into their shops. Also to that point, I hear other languages almost every day on the street, whereas in the past that was a much less common occurrence. I really like the sound of that. It sounds like a growing city.