A Dopo Sourdough Pizza Serves Some of Knoxville’s Finest Pizza 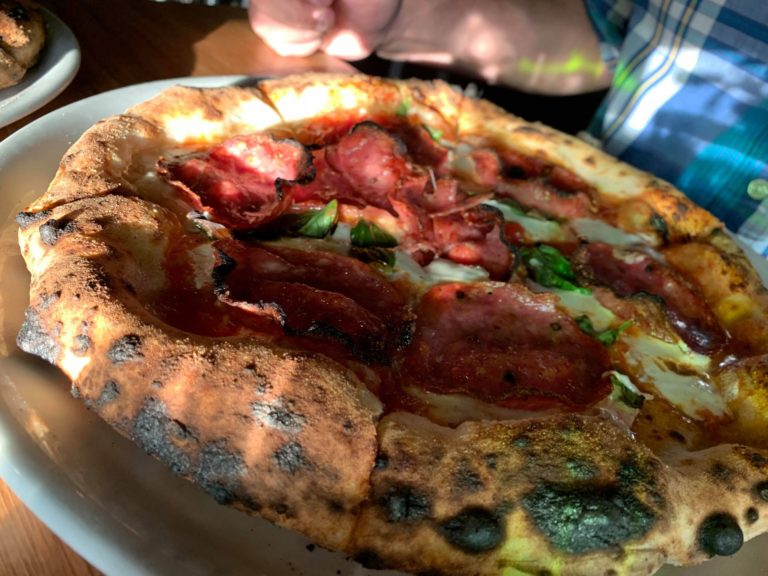 (Written by AppalachianGastroventures for Inside of Knoxville. This is the third installment in their monthly series of restaurant reviews, allowing for further exploration of local restaurants after their opening. Check out their blog for many more dining experiences!)

Translated from Italian, “a dopo” represents a friendly way of saying farewell as well as a prescient statement about a certain wood-fired pizza joint just north of Old City.

The menu at A Dopo Sourdough Pizza doesn’t let you forget that it doesn’t mean “goodbye.” It means “see you later.”

A Dopo has been around since Brian Strutz first fired up the specially constructed pizza oven in 2016. And in a testament to creativity, craft, and simple ingredients, there have been plenty of “see you laters” at the Williams Street restaurant since.
Located in the former home of a paint store, A Dopo can be found north of the interstate, just a bit north of Tako Taco and Mill and Mine and Public House. It’s already often jam-packed on the weekend and is no secret to those that love good pizza with a flair, but as that area is increasingly developed, expect it to become even more popular.
The sourdough base of the 12-to-13-inch Neopolitan pizzas are made daily and provides a tender and airy crust with pleasant bubbles that is firm at the same time. After a quick visit to the scorching oven, the pizza develops a slight char on the outside but its center remains light, thin, and pliable.
It can be eaten with a fork or, for those more adventurous, with your hands, but folding is often necessary, which actually helps amplify the flavors.
The dough is made daily, and all the ingredients at A Dopo are fresh as well. Their red sauce is made with crushed plum tomatoes and sea salt, while the white sauce is made from mascarpone cheese, local cream, and pecorino romano cheese. You can’t go wrong with either, and in our several visits (remember, the name is A Dopo after all) we haven’t.
A Dopo never makes things overly complex. But what they do, they do well. A starter of warm flatbread, house-made mozzarella, and a basil and pistachio olive oil is the perfect way to ease into the meal, and an extensive wine list offers variety for anyone. We opted for a New Zealand sauvignon blanc and a Pretentious Beer Co. IPA during a recent trip, but there’s something for everyone.
On to the main course, sopprassata salami on top of red sauce with basil was elegant in its simplicity, each mouthful biting your tongue with the zesty sauce and salty — and thanks to that wonderful brick oven — crisped salami.
The white pizzacletta looks a lot like a salad on a pizza, but underneath piles of fresh arugula the brininess of prosciutto blends perfectly with the creamy white sauce. We added some of the restaurant’s “sweet hot” sauce as well — a combination of honey and calabrian chiles — and it gave the pizza a perfect touch of heat.
Other toppings include pepperoni, calabrese salami, mushrooms, white truffle oil, and olives, as well as house-made ‘nduja, which is a spicy and spreadable pork salumi. There’s also speck ham, which is a cured and cold-smoked and looks and tastes a lot like bacon.
A third in our party opted to add the speck ham to the simple margherita pizza and the effect was transformative, with the delicate ham crisping up like bacon and melting in your mouth next to bites of mozzarella.
“See you later” indeed.