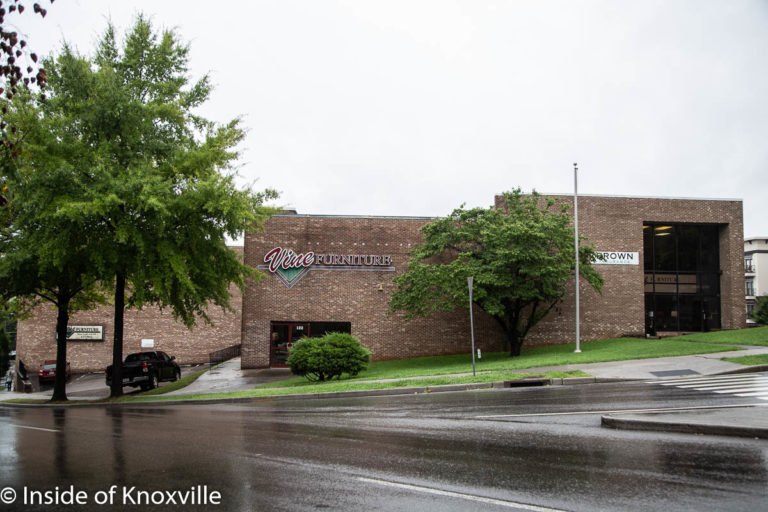 It’s not the flashiest or the trendiest business downtown, but it’s been quietly serving the city center and nearby areas for three-quarters-of-a-century. Founded in 1944 by George Hoffner, Jr., the business has remained in the same family’s hands throughout it’s history. The story really goes back another generation. George Hoffner, Sr. owned City Furniture Company across the street, and when George Jr. returned from the war, his father gave him seed money to start his own furniture store.

Eventually, George, Sr. closed his store and worked with his son a while at Vine Furniture. The business eventually went to George, Jr.’s daughter, Karen and her husband, Kris Shinlever. Their son Kelly now runs the store with them and has worked in the store his entire life, and says he “never drew a W2 from any other business.”

Kelly and his wife Jennifer, who is a special education teacher in Maryville at Foot Hills Elementary, have four children, including triplets who are heading to college this fall at Pellissippi, Carson Newman and UT, while the fourth is starting Maryville High School. Kelly says the children sometimes work in the store — Conner was working when I was there — but they don’t seem to feel the passion for the family business he always felt.

Kelly says there were once twelve furniture companies on Vine (Summit Hill did not exist until the late 1970s) from Central to Gay Street, most of which were very small. He keeps the names of the stores on Vine in his phone and rattles them off, including American Home, Economy, Bridge and Porter, Leon and others. He says there were also three on Central. Add the five or more large furniture stores on Gay Street, and Knoxville was quite a furniture town. Of all the furniture stores dating to that era, only two are left and it seems to be a source of some pride that his is one.

The store has always offered financing on their furniture, which is a distinction from most furniture stores today. Back in his grandfather’s time, deals for payment were made on a handshake. Today’s credit world is a bit more complicated. He says about seventy percent of their business is credit and the other thirty percent is purchased up front. They’ve seen some increased business from new downtown residents, but the bulk of their business comes from people and families who have shopped the store for decades for furniture and appliances.

Kelly says he never really considered doing anything else. After working in the store as a young boy, he acquired a degree from UT in Finance and then returned to work at the store, living across the street in the building his great-grandfather used for his business. He explains his life-long relationship with the business in simple terms, “I’m a people person. In this business I get to interact with people from all walks of life.”

The business was jeopardized in the mid and late 1970s when the city determined to reconfigure vine and change a strip of downtown in favor of a new, swooping street. By then his family owned the block and fought to save as many and as much of the buildings as possible. Two were trimmed by 30 feet across the front and one end had to be re-oriented to fit the new route of the thoroughfare.

The family wears many hats and has to be willing to do what is need, including deliveries and, in the case of one of my recent purchases, assisting with loading furniture in cars. He humbly says of the business, “We’ve always made a living at it.” At the same time, he recognizes changes in downtown and is aware that the long-term picture for his type store is murky.

He’s watching the rise in real estate prices and considering the changes to downtown. For now, the family intends to continue operating the family business and he says he’ll see what comes next. In that connection, he has made a determination to change uses for one of the buildings on the block. We’ll talk about those plans tomorrow. In the meantime, drop into the store and support them or at the least get to know a downtown family with deep roots.