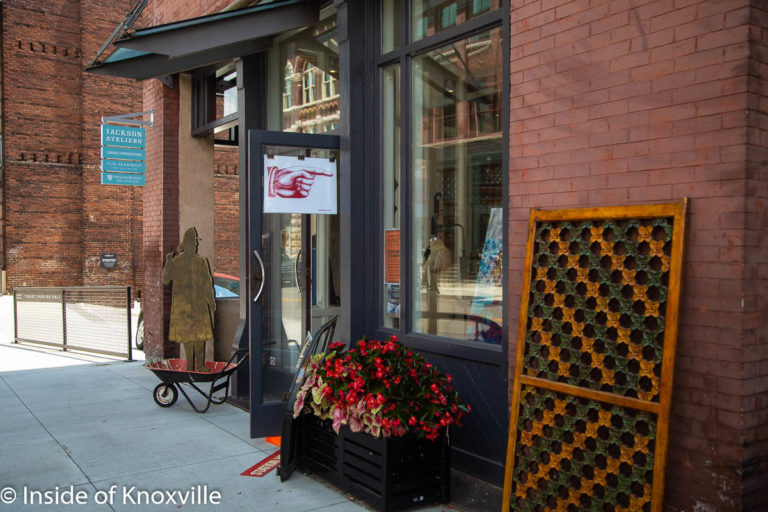 Joy O’Shell and Scott Filar have opened a unique antique store with an artistic element at 130 West Jackson. Each piece in their carefully curated collection is meticulously described on the back of “hello” cards Joy found at Pioneer House. It’s modeled after the J. Peterman Catalog from the 1980s — a catalog to which they each subscribed before meeting.

Scott said, “We want to bring the story to life until a collector finds it and wants to take it home.” He says they are looking for a personal meaning or connection, “things that might easily be overlooked” but might provide meaning in someone’s environment. “The fun is in the search. You want to be inspired.” Not sticking to one genre of antiques, they search for objects for which “the mere fact that it survived but is still compelling in an honest way,” gives it meaning. The weathering and the wear becomes part of the story. They aren’t as much interested in antiques in pristine condition.

Joy was born in Knoxville, but grew up in Kingston where her father was a nuclear engineer who played music on the side. She attended UT where she studied English, but also formed a band and set her sights on being a rock star. The band ultimately imploded, but in the meantime, got a recording contract that Joy and her bandmates could not understand. That fact intrigued her and she applied to law school in Chicago to study intellectual property law.

She’d grown up going with her father to antique stores and when a misdirected piece of mail advertising such a store arrived at her new Chicago address, she went as soon as possible. The owner was one Scott Filar and she says it was love at first sight. They shared a lot in common and as she worked her way through law school, she began to work with him and the two grew their shared fascination with found objects elevated to art.

Much of his business was at antique shows and she was fascinated with the fact that found spaces became centers of commerce — a hotel became an antique market, an open field in Texas and other non-traditional spaces provided an economic base.

As she began her legal career, she worked for Amazon, AOL and Circuit City among others, always in the area of music. She also worked with startups and focused on mergers and acquisitions, helping small businesses integrate into larger businesses. The couple and their growing family (four children, ages 2 to 12) lived in Seattle, Denver and New York City, but she says Knoxville was always home and she always told its story. She encountered so many people with connections here that she determined it must be the center of the universe.

Along the way the family always lived in and loved the walkability and vibrancy of downtowns. They moved back to Kingston four years ago and became interested in helping its downtown recover. She continued to work for a time in New York City, then volunteer at Knoxville’s Entrepreneur Center before joining the staff there. She was then hired by Ashley Capps, whom she had admired from the Ella Guru days, to help with the merger of AC Entertainment and Live Nation.

She’s now excited for the two of them to start their own business. “I had never started my own business and felt like an impostor.” She found a great mentor in Booth Andrews through the Entrepreneur Center. She says she wants her children to have the experience of working in a family business with everything that entails.

Scott carried his materials around the country as the family moved, continuing to dabble with antiques before ultimately deciding to become a full-time parent which he calls one of the great blessings of his life. That he would have an antique store earlier in life and now return to it was a natural progression of various elements in his early life.

Growing up in the former meat-packing district of south Chicago – the setting for Upton Sinclair’s “The Jungle,” he went to flea markets with his grandmother. While she searched for deals on socks and other practical items, he was taken with African masques and a particular spear he longed for, but never possessed. His father’s mother owned a Tiki bar and his mother was a “talented hula dancer in the 1950s.”

His dad was from the southside and didn’t have much use for school until he took a geometry course that led him in the direction of teaching and design. When his father was laid off, his mother began a successful banking career. He remembers the early influence of exposure to Architectural Digest and “a big book on Leonardo DaVinci.” His dad developed a range of interests from developing ethnic recipes and growing a garden, to teaching Scott to appreciate the beauty of rust.

He remembers playing in the railyards and discovering the remnants of hobo camps. They took expeditions to the junkyard where his father would search for specific kinds of metals for art projects — he once made a life-sized skeleton from found wire. Scott drew the impression that art can happen every day, that it’s all about what you see, or re-educate yourself to see.

Scott’s family allowed him to respond to an ad he found in a Swedish newsletter his grandmother took, offering a study abroad program and he moved to Sweden during high school, turning seventeen while there. He attended Knox College in Illinois, with plans to attend the Iowa Writers’ Workshop as a graduate student. Restless, he switched from English to modern languages to get the opportunity to travel and subsequently studied in Barcelona.

After graduating, he worked odd jobs and started dating a woman who liked antique malls. With little intention of starting a business, he was asked to help a friend out by sharing a space in one of the local malls. He experienced success selling found objects and moved into his own space and, ultimately, opened the store where he would meet Joy. “I was lucky that enough people found interesting what I found interesting.”

On September 10, 2001, a national magazine ran a story about him and the business and he woke up to dozens of messages and got excited about what would happen next with the business. The next day America faced the largest terrorist attacks in its history and the antique business plummeted. Joy had graduated from law school the year before and a few years later, they began moving around the country for her job.

Since their return to east Tennessee (they now live in Knoxville), Joy has been involved in the ETSY Maker City efforts, traveling with a group to New York City to help set the effort in motion. The couple ran into artist Mark Carson English during Rhythm n Blooms and learned he was moving his gallery. They were familiar with the space, having lived in the JFG Building for a year-and-a-half.

They’ve assumed his lease through December 31 and plan to have a presence in the city there or elsewhere after that date. Summer hours are Noon – 6:00 PM Wednesday through Sunday, with extended hours for special events like First Friday and the Old City Market. Joy said they are very happy to be a part of the community and that they have been helped by so many people, from Robin Easter to Nanci from Rala and Mark Carson English. “You can’t do something like this by yourself. We’ve been so encouraged.”

Check them out this week and watch for their upcoming social media and web presence.

Ed. Note: I feel compelled to say a brief word about Michael Haynes. I first knew Michael through his byline with Metro Pulse and his monthly “Shot of Urban” article. It was one of the main sources of information we found as my wife and I considered moving downtown in 2009. I met him not long after moving and experienced his rough edges just a bit. I think he saw me as a suburban interloper calling myself “urban” and he had a point.

He was rough for a time, as might be expected – he’d seen downtown from the inside through some of its darkest years and I’d really only dropped into his world sporadically through the 80’s and 90’s before becoming increasingly pulled to the city center in the new millennium. He sometimes left acerbic comments, for which he was known among his friends, on this blog. But the story didn’t end there.

Eventually, at least to my face, he began to accept me and was quite cordial. I got the “Michael nod” from his — and I do mean his — table in front of Downtown Grill and Brewery where he held court for more than two decades. While we never really became friends,  I’m happy I once bought him a beer.

What people don’t know is that we exchanged emails. He would tell me when he thought I could do better and he helped me do just that. It might be an ethical suggestion or a journalistic one or both, but he was genuinely helpful. I grew to appreciate him and to value his guidance.

Michael died this past weekend at age 58 of pancreatic cancer. A void will be left in his spot at that table and in the larger downtown. And I’ll miss those sporadic emails making sure I do things the right way. God speed, Michael.