A Great Weekend of Pro Cycling in Knoxville! 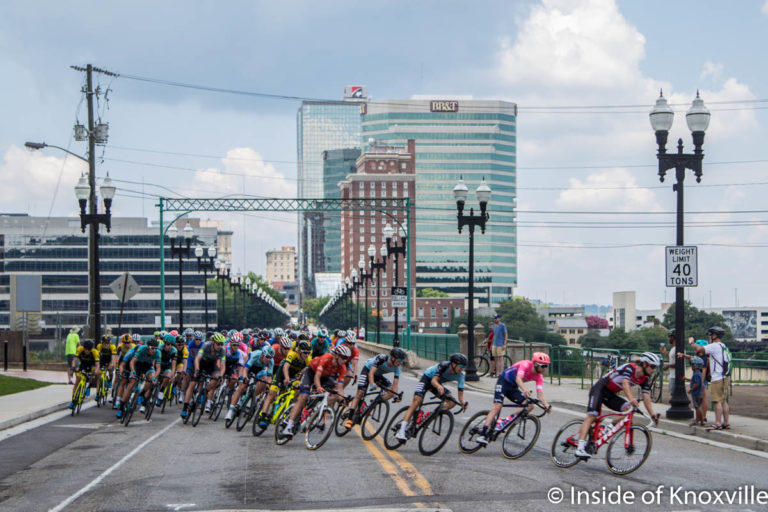 The downtown portion of the US Pro Cycling Championships got off to a rocky start when surprise thunder storms slipped through the city. What looked like potential disaster turned into a gift as the rain quickly stopped, lightning moved away from the area and the temperatures took a twenty-degree plunge.

The cooler temperatures made for a very fast field in all races. I missed the para-cyling events both Friday night and Saturday morning due to other obligations, but I picked up with the women’s start on Friday. The course is a 1.1 mile loop through downtown Knoxville. Women race for 70 minutes and the men race for 80. The course is modestly complex with successive sharp turns just before the finish line. It’s more-or-less a sprint from start-to-finish.

Emma White of New York won the race after finishing fourth last year. She pointed out and the men’s winner, Travis McCabe of Arizona, echoed the statement, that the leader going into the final turns will almost certainly win as the distances to the next turn and then the finish is very brief and not amenable to passing. To win, she barely held off Lily Willams of Asheville, the 2017 winner. At 21, White is also the youngest woman to ever hold the title.

Sunday brings the premier events, the Women’s and Men’s Pro Road Race Championships. These races are a different beast, with the course starting on Gay Street and moving over the river and into south Knoxville, including the, now famous, climb on Sherrod. Cyclists loop on James White Parkway before crossing the south Knoxville Bridge and passing by the Old City on their way back to Gay Street.

The route is roughly eight miles and the women take nine laps for a total of 71 miles. The men follow the women with fifteen laps for approximately 118 miles. It’s a grueling course that includes steep climbs, steep downhill descents with sharp curves and long distances in the direct sun. With temperatures in the 90s, the heat was a particular challenge this year.

In a coincidence, both the men’s and women’s winners are from Boulder, Colorado. Both races were stunningly exciting to the finish. In the women’s race, winner Ruth Winder attacked on the hill at Sherrod on the next-to-last lap and shook all riders before allowing Lily Williams to join her. The two finished the remainder of the lap to the final climb at Sherrod where Winder shook her and never looked back.

The men’s race had a breakaway that led the pelaton by as much as fifty seconds before they closed the gap to about thirty seconds. The three men in the breakaway battled to the finish line and Knoxville’s Stephen Bassett seemed poised to win with about 1K to go before cracking and being passed by Alex Howes for the win.

As in previous years, crowds were large and loud with no one asking for “more cowbell,” as the noisemakers were prolific all along the route. The riders and organizers seem to favor our city as they made the announcement prior to the event that Knoxville would continue to host the races. It’s only the second time that all the various race championships have been aggregated in one city.

This is but a small sample of the photographs, of course. You might watch the Inside of Knoxville Facebook Page for the remainder. And while you are at it, have you “liked” that page? It’s a good day to do just that!