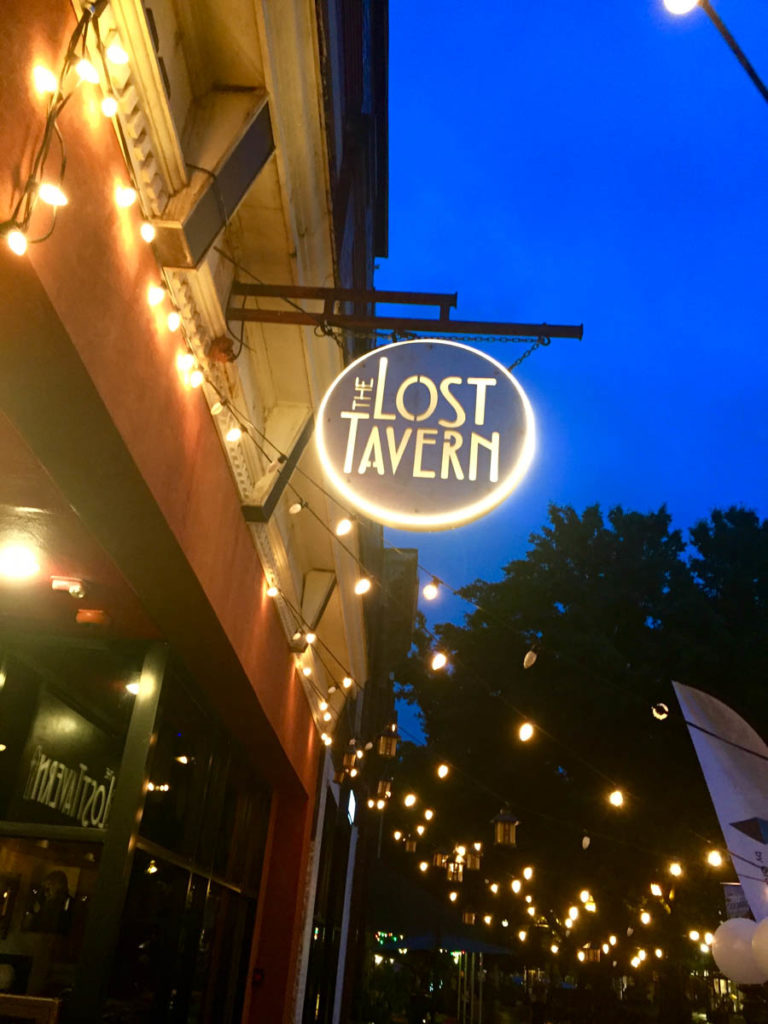 It’s smoky, but the only smoke found in the new tavern on Market Square is found in the food, drink and the atmosphere. The new noir-themed craft cocktail bar on Market Square represents the latest opening by the West family and, unlike their other establishments, Scott West points out the “entertainment” in this venue is the food and drink, as well as the general atmosphere.

Photos lining the wall and surrounding the dual bars reference the romantic era of cinematic noir and they intermingle with sensational noir-style stories from Knoxville’s history. Bartenders dress in a dapper style reminiscent of that bygone era. Whereas the other West establishments focus on televised sports or live music, this one is much more about the experience and the cocktails, with some very good food rounding out the experience.

Entering between two newly installed street lights, the feel is immediately different, as if stepping off fog-laced streets into a bygone era. Chef Justin Holleman says it has all been very intentional, each dish prepared with great thought. He’s updated West family favorites such as cheese and charcuterie boards, shrimp and grits and fish and chips and he’s added a line of smoked foods such as salmon (I sampled this and it was delicious), pork and pickles.

Chef Justin who, for the last four years, was executive chef at Rarity Bay said, “I really like the idea of the speakeasy, prohibition style. The food fits the theme. The salmon takes four days to prepare, twenty hours of processing goes into the pork.” He said that high-end alcohols are used in preparing a number of the sauces. He’s developed a caramel/bourbon sauce that he hopes to serve on French toast as brunch hours are added on the weekend. He’s been cooking since age eight and attended culinary school in Charleston.

The drink menu has been developed by Blake Faircloth who said, “I want to get back to classic roots and traditional cocktails made in the classic way.” He’s using and absinthe drip for the sazeracs, for example. He’s insisting on all top-flight ingredients, from the butter to the sugar and the whiskey. Several of the drinks are served in a smoker and the aroma fills the bar.

Featured drinks are named to embrace the theme. Popular drinks include the Red Widow (who may or may not have killed her husband), the White Lady (ghost?) and Corpus Delicti (no body, no crime). Blake says all the juices used are fresh squeezed and you’ll find high-end ingredients whether you come during happy hour or later. They are also barrel aging cocktails, which he says is unique in Knoxville.

Like Justin in the kitchen, Blake brings extensive experience to the bar. He says he’s always been attracted to cocktails and while he started out in northern California, he’s worked in all fifty states, many of them opening locations for Roy’s (and chef Roy Yamaguci). He’s also consulted with The Aviary in Chicago and New York. He notes the new restaurant will carry a very small selection of wines, with the emphasis on provided a high-end cocktail experience.

The new restaurant is open for business, but will continue to evolve in the coming weeks and months. Umbrellas for the front and a darkening for the windows to add to the ambiance are likely in the short term. Weekend brunch and a dessert menu may be added. Stop in and check it out at 20 Market Square.